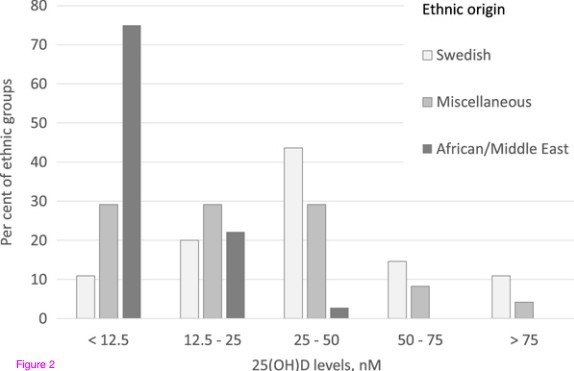 Methods
In this study, 25-hydroxyvitamin D (25(OH)D) was analysed in 58 Sweden-born sibling pairs, in which one child had autism spectrum disorder (ASD) and the other did not. The study group consisted of two representative samples; 47 Gothenburg sibling pairs with mixed ethnicities and 11 Stockholm sibling pairs with Somali background. 25(OH)D levels were analysed in the stored dried blood spots taken in the neonatal period for metabolic screening.

Results
The collapsed group of children with ASD had significantly lower vitamin D levels (M = 24.0 nM, SD = 19.6) as compared with their siblings (M = 31.9 nM, SD = 27.7), according to a paired samples t-test (P = 0.013). The difference was - most likely - not only accounted for by a difference in season of birth between ASD and non-ASD siblings since the mean 25(OH)D levels differed with similar effect size between the sibling pairs born during winter and summer, respectively.
All children with African/Middle East background, both the children with ASD and their non-ASD siblings, had vitamin D deficiency.

Conclusions
The findings suggest that low prenatal vitamin D may act as a risk factor for ASD, however, there is a need for replication with larger samples. Future research should study whether or not adequate supplementation of vitamin D to pregnant women might lower the risk for ASD in the offspring.

New title for this page Feb 2019. caused the visitor count to reset.
There have actually been 5607 visitors to this page since it was originally made
Non-autistic siblings had higher vitamin D levels at birth – Jan 2015         Printer Friendly Follow this page for updates
This page is in the following categories (# of items in each category)
Autism 136