Most people are not vitamin D deficient – Consumer Reports May 2011

How much is too much? What you should know about getting tested.

Vitamin D is hot—and not just because it comes from the sun. Once prescribed only to prevent or treat outright vitamin D deficiency, rickets, and osteoporosis, doctors have increasingly recommended vitamin D supplements to treat or try to prevent a lengthy list of ills, including autism, certain cancers, diabetes, heart disease, multiple sclerosis, respiratory infections, and cognitive decline in seniors.

Prompted by news reports of vitamin D's benefits and a perception that they don't have enough of it, an increasing number of consumers have been asking doctors to test their vitamin D levels. As a result, sales of vitamin D have skyrocketed to $425 million in 2009 from just $40 million in 2001, according to the Nutrition Business Journal.

But is vitamin D worth the hype? A recent report by the Institute of Medicine found that the news media and medical profession overreacted to the cascade of studies in the last decade associating low levels of vitamin D with numerous ailments. The institute's November 2010 report, which examined more than 1,000 studies and other reports, concluded that vitamin D was essential for bone growth and maintenance but that the evidence of its benefits beyond that was inconclusive.

Since most cells in the body have receptors for vitamin D, its potential involvement in other diseases, such as cancer, is a tantalizing area of research but one that requires more in-depth, large-scale studies. "We don't understand the mechanism for how it might prevent these diseases, or how much is needed," says Frank Greer, M.D., a professor of pediatrics at the University of Wisconsin.

Most of us aren't deficient


Much of the evidence for vitamin D comes from population studies, which have suggested a positive relation between high blood levels of the vitamin and a reduced risk of disease. But they haven't proved a cause and effect. Since vitamin D can be created by exposure to sunlight and is usually higher in people who are thinner, it could be that people who have high levels of the nutrient tend to exercise more or have healthier weights.

And there is confusion over what constitutes vitamin D deficiency. The IOM report challenged the notion of a widespread deficiency of the vitamin or of the mineral calcium. So why do people think they're deficient? One explanation is that most testing laboratories have changed their definition of a "normal" blood level. The lower limit used by many was 20 nanograms per milliliter; now anything under 30 ng/ml is considered an insufficient amount.

While some people truly are deficient in vitamin D, the report concluded that the average American is not. Even assuming minimal sun exposure, the panel found that people are probably consuming adequate amounts of both vitamin D and calcium because they take multivitamins and eat food that has been fortified with those nutrients.

The report's recommendations—that children and most adults get 600 international units of vitamin D a day, and people older than 70 get 800 IU—were more than the targets set 14 years ago (200 IU a day for adults ages 19 to 50, 400 IU for those older than 50, and 600 IU for those older than 70). But they fall far short of the daily intake recommended by some experts—up to 3,000 IU a day for people living in areas such as the Northeast.

Failed promises of other supplements


There are good reasons to be cautious before embracing a nutrient's potential until rigorous testing has been done.

JoAnn Manson, M.D., Dr.P.H., a Harvard Medical School professor who is also chief of preventive medicine at Brigham & Women's Hospital in Boston and a member of the IOM committee, points to the failed promise of supplements of vitamins C and E and the nutrient beta carotene, as well as hormone therapy in women. All of them were at one time thought to prevent cancer or heart disease but didn't withstand the scrutiny of clinical trials. Some studies even suggested that they could be harmful at high levels, increasing the risk of lung cancer (among smokers taking beta-carotene pills), and the potential for heart failure, hemorrhagic strokes, and even death for those taking as little as 400 IU of vitamin E a day.

"These all looked beneficial in observational studies," Manson says. "But when subjected to rigorous testing, they were shown not to be of benefit."

Trials for vitamin D are ongoing, including one that Manson is leading involving 20,000 healthy older Americans. The trials will examine whether taking 2,000 IU of vitamin D a day can lower the risk for heart disease, stroke, or certain cancers. "We expect the benefits will outweigh the risks, but we don't know conclusively," she says.

Is vitamin D a special case?


Other experts argue that the IOM's report is overly cautious and that there is no downside to increasing vitamin D levels. "The good news is, they recognized that the recommendations in 1997 were woefully inadequate, and they increased them threefold, which is quite remarkable for any nutrient," says Michael Holick, Ph.D., M.D., a professor of medicine, physiology, and biophysics at the Boston University School of Medicine and the author of "The Vitamin D Solution" (Hudson Street Press, 2010). "But they didn't go far enough." He recommends that his patients try to achieve vitamin D blood levels of 40 to 60 ng/ml, an amount that typically requires a total of 3,000 IU a day.


But Consumer Reports Health doesn't agree with that advice for a number of reasons. The IOM report set the upper limit for vitamin D at 4,000 IU for those 9 and older, after which the risk for harm begins to increase. At very high levels—above 10,000 IU a day—there's a risk of kidney and tissue damage.
(Note: there was not a single instance of problems with 10,000 IU in the IoM report – it was at 20,000 and they chose to add a factor of 2X safety margin)

According to the IOM, a vitamin D blood level above 50 ng/ml should raise concerns about potential adverse effects, which some evidence suggests could include raising the risk for other diseases, such as pancreatic cancer.

And with many proponents of vitamin D arguing for elevating levels into the 40-to-60 ng/ml range for the general population, some experts emphasize the need to be more vigilant.

"People tend to think that if one pill might be good, then maybe a handful would be better," says Tim Byers, M.D., M.P.H., a cancer epidemiologist and associate dean of the Colorado School of Public Health in Denver. "But our experience with this teaches us that caution is needed when taking large doses of supplements. Sometimes we don't discover the harms of supplements until we've accumulated a large enough number of subjects and studies."

For African-Americans, taking vitamin D supplements could even be counterproductive. Last year a study by the Wake Forest University School of Medicine involving 340 African-Americans with type 2 diabetes found that those with the highest vitamin D levels (few of whom were taking calcium or vitamin D supplements) were more likely to have calcified plaque in their major arteries, a predictor of heart attack and stroke.
(see scores of other evidence: Overview of Dark Skin and Vitamin D)

Barry I. Freedman, M.D., the study's lead author and chief of the section on nephrology there, says that this was the opposite of what occurred in white patients, indicating that the accepted "normal" range of vitamin D might differ among races. He points out that African-Americans have markedly lower rates of osteoporosis and have less calcium deposited in their large arteries compared with whites, despite their lower vitamin D levels.

"We need to determine whether we should be targeting the same vitamin D level in blacks as whites, and better understand the cardiovascular effects of supplementing vitamin D in African-Americans," he says.

Should you be tested?


Our medical consultants say that the evidence suggests that screening as part of a routine regular exam is not yet justified. Instead, it should generally be limited to people who have some objective evidence or reason that they might be vitamin D deficient, such as having markedly weak bones, celiac disease, or other ailments that impair the body's ability to absorb the vitamin from food.

It's less clear whether testing makes sense for people who are at slightly increased risk of low levels because they are overweight, don't get much sun exposure, or eat little vitamin-D rich foods. If they choose testing, they should know that the benefits are less certain for them and that insurance will be less likely to cover the cost, which can range from $40 to almost $300.

What you should know about testing

For adequate bone health, your blood level of vitamin D should be at least 20 ng/ml, a level that would protect at least 97.5 percent of the population against adverse skeletal effects, such as fractures, and ensure healthy bones. Inadequate intakes are diagnosed when levels dip well below 20.
(perhaps 20 ng is OK for bone health, but the health of the rest of the body needs 30 to 50 ng)

"Doctors are using what clinical labs define as deficient," notes Patsy Brannon, Ph.D., R.D., a professor of nutritional sciences at Cornell University and a member of the IOM panel. "We have people getting lab values back at 29, being diagnosed as insufficient, and being given extremely high doses for fairly long periods of time. You could easily wind up with blood levels approaching 50 ng/ml."

Adding to the challenge of interpreting your results are these factors:


If you decide to be tested, ask whether it will be done in-house or sent to a reference lab, where the volume of tests can be much higher and the accuracy probably better. "Tests like vitamin D are mostly manual and are prone to shifts and bias, which are only observed if one performs at least more than 50 a day," says Ravinder Singh, Ph.D., co-director of the endocrine lab at the Mayo Clinic.

If the results of your test are abnormal or unexpected, you should be retested. If you are found to be deficient, your doctor will probably recommend an oral dose of 50,000 IU of vitamin D once a week for 8 to 12 weeks. After that, maintenance might require 400 to 800 IU depending on your diet. In general, for every 100 IU of vitamin D you take in, there is an increase of roughly 1 ng/ml in the blood level of vitamin D.

Advice can change as studies are completed. "The intakes are not set in stone," says Clifford Rosen, M.D., of the Maine Medical Center Research Institute in Scarborough and a member of the IOM Committee. "If you want a kind of insurance policy in case we find a positive effect later, supplementation is not harmful at low doses."

Until research confirms the benefit of higher doses, stick with the IOM's recommendation: 600 IU for adults up to age 70 and 800 IU for those older than 70. Look for a vitamin D product with the "USP Verified" mark, which means it meets standards of quality, purity, and potency set by the nonprofit U.S. Pharmacopeia. For better absorption of the vitamin, take it with a meal containing some fat. Good food sources of vitamin D include cod-liver oil, cooked button mushrooms, eggs, fortified milk and soy products, mackerel, sardines, and wild Alaskan or sockeye salmon.

If you get some midday sun exposure during the warmer months and regularly consume vitamin D-rich foods, you probably don't need supplements. People who are middle-aged or otherwise at risk of vitamin D deficiency, including those who are overweight or have darker skin, might need supplements. Even then, the amount in most multivitamins is probably enough.
– – – – – – 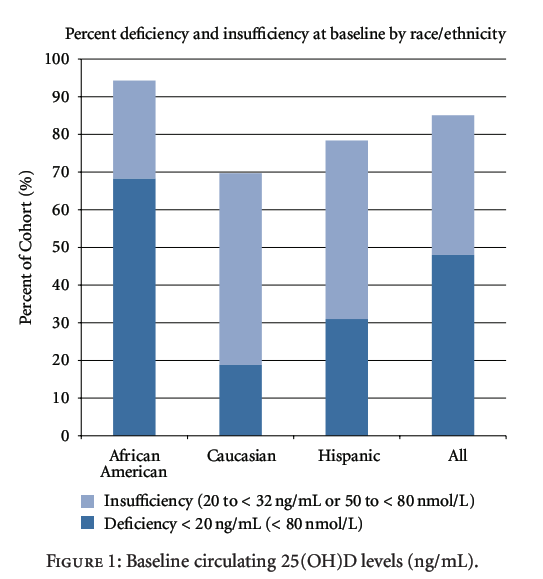 Hardly anyone, of any age, gets enough vitamin D from diet or supplements

Most people are not vitamin D deficient – Consumer Reports May 2011         Printer Friendly PDF this page! Follow this page for updates
This page is in the following categories (# of items in each category)
How much Vitamin D 335