An ecological study of cancer incidence and mortality rates in France with respect to latitude, an index for vitamin D production

France has unexplained large latitudinal variations in cancer incidence and mortality rates. Studies of cancer rate variations in several other countries, as well as in multicountry studies, have explained such variations primarily in terms of gradients in solar ultraviolet-B (UVB) doses and vitamin D production. To investigate this possibility in France, I obtained data on

cancer incidence and mortality rates for 21 continental regions and used this information in regression analyses with respect to latitude.

Although correlations with latitude were similar for males and females, the regression variance for all and all less lung cancer was about twice as high for males than for females.

On the basis of the available dietary factor, micro- and macronutrient data, dietary differences do not significantly affect geographical variation in cancer rates. These results are consistent with solar UVB's reducing the risk of cancer through production of vitamin D. In the context of serum 25-hydroxyvitamin D level-cancer incidence relations,

cancer rates could be reduced significantly in France if everyone obtained an additional 1,000 IU/day of vitamin D. Many other benefits of vitamin D exist as well.
– – – – – – – 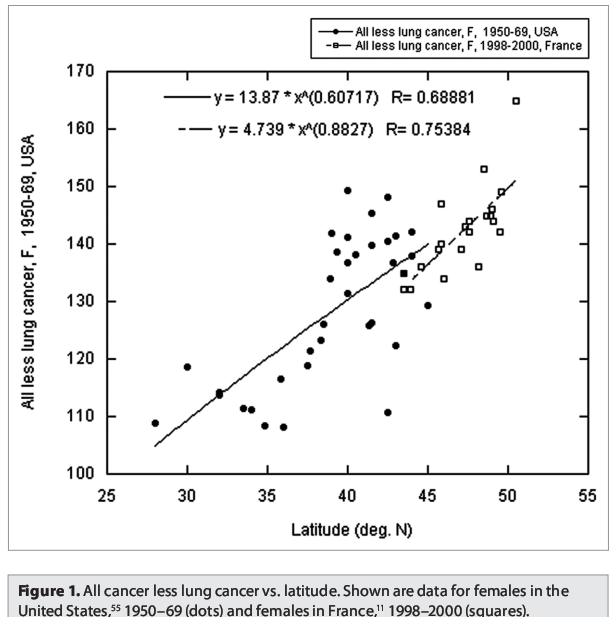 Mortality and Cancer varies with latitude in France too – 2010         Printer Friendly PDF this page! Follow this page for updates
This page is in the following categories (# of items in each category)
Mortality and D 273 Cancer 238 Vitamin D in Europe 214

Air conditioning has not totally canceled the latitude effective in the US ye...