Introduction: There is emerging evidence on the widespread tissue effects of vitamin D.

Aims: To formulate a position statement on the role of vitamin D in postmenopausal women.

Materials and methods: Literature review and consensus of expert opinion.

Results and conclusions: Epidemiological and prospective studies have related vitamin D deficiency with not only osteoporosis but also cardiovascular disease, diabetes, cancer, infections and neurodegenerative disease. However the evidence is robust for skeletal but not nonskeletal outcomes where data from large prospective studies are lacking. The major natural source of vitamin D is cutaneous synthesis through exposure to sunlight with a small amount from the diet in animal-based foods such as fatty fish, eggs and milk. Vitamin D status is determined by measuring serum 25-hydroxyvitamin D [25(OH)D] levels.

Optimal serum 25(OH)D levels are in the region of 30–90ng/mL (75–225nmol/L) though there is no international consensus.
Levels vary according to time of the year (lower in the winter), latitude, altitude, air pollution, skin pigmentation, use of sunscreens and clothing coverage.

Regular sunlight exposure (without sunscreens) for 15min, 3–4 times a week, in the middle of the day in summer generate healthy levels.

The recommended daily allowance is 600IU/day increasing to 800IU/day in those aged 71years and older.

Supplementation can be undertaken with either vitamin D2 (ergocalciferol) or vitamin D3 (cholecalciferol) with monitoring depending on the dose used and the presence of concomitant medical conditions such as renal disease.

These are just estimates by VitaminDWiki

No – 10 minutes per day of sun-UVB is NOT enough

WRONG most of the time

5-10 minutes is enough IF you are near the equator
AND young
AND not obese
AND have light skin
AND it is summer
AND it is the middle of the day
AND you have lots of skin exposed to the sun
AND you are lying down
AND you are not wearing sunscreen.

Vitamin D Recommendations from around the world has the following chart 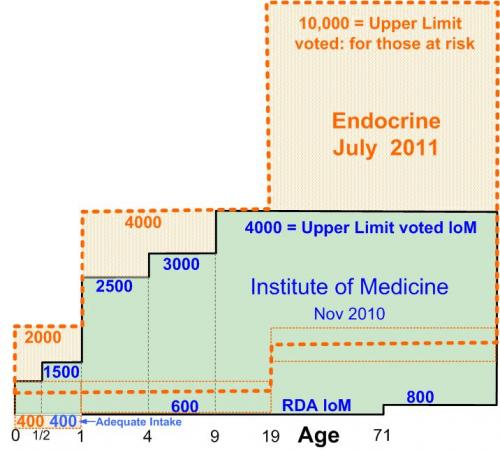 Dose Response Graphs example graph:
Appears that about 10% of people achieved more than 30ng of vitamin D with less than 800 IU of supplements

This does not account for vitamin D from the sun, food, etc,, only supplements

Also, this statement failed to recommend more IU of vitamin D to groups which are known to be at high risk, such as

This group is reluctant to promote vitamin D, and it will reduce their jobs
Quote from Upton Sinclair
"It is difficult to get a man to understand something when his salary is dependent upon his not understanding it”

Menopause group advises too little vitamin D supplementation etc. – Jan 2012         Printer Friendly PDF this page! Follow this page for updates
This page is in the following categories (# of items in each category)
Deficiency of Vitamin D 404 Seniors 367 Women 149