The aim of this study is to confirm our original hypothesis that maternal deficiency of vitamin D is a major factor in development of rickets in her breastfeeding infant and review the literature. In six months from October 2008 to March 2009 out of 136 infants with diagnosis of clinical rickets, seen in Medinah Maternty and Chlidrens Hospital, 40 infants and their mothers were included in this study. Sochioeconomical data were recorded. Blood samples were collected for biochemical and for parathormone and vitamin D (25OHD) levels from both mother and baby. Radiology of wrist was done for each infant. All cases were divided to three age groups. Results from pairs were available. On comparing parathormone (MPTH) in mothers of children (CPTH) with active rickets and healed rickets. MPTH was 94.8 and CPTH 199.9, this was considered significant at P value .0104. As for children with healed rickets and their mother's PTH the mean PTH was 199.8 in active rickets and 60.8 in healed rickets, the P value is 0.002 which is very significant. The 25OHD levels in mother and breastfed infants with active rickets were very low in infants with active rickets and low in their mothers. In the healed group 25OHD was significantly high in infants but not in mothers. The hypothesis that maternal vitamin D deficiency is a major factor in pathogenesis of their infants was further confirmed. Vitamin D supplementation during pregnancy and lactation for the mother and breastfeeding infants is recommended to prevent vitamin D deficiency and rickets and their serious complications. 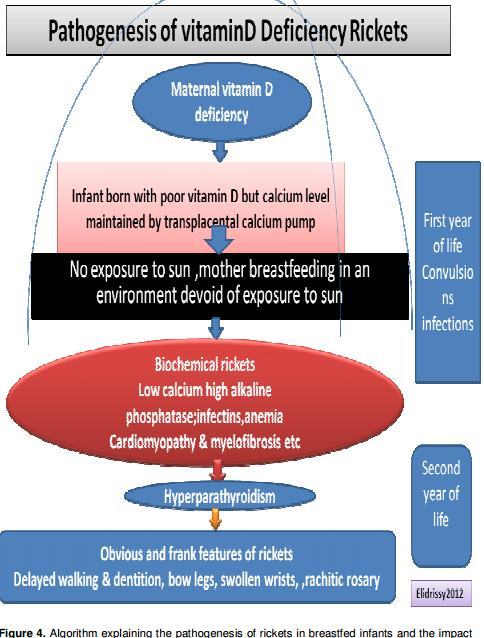 Text indicates that 400 IU may not be enough

Maternal vitamin D deficiency can trigger rickets in breastfed infants – review March 2013         Printer Friendly PDF this page! Follow this page for updates
This page is in the following categories (# of items in each category)
Rickets 123