Vitamin D levels are not related to acute exacerbations of chronic obstructive pulmonary disease (AECOPD) in patients with severe COPD, according to a large prospective cohort study involving 973 North American patients. The findings were published online ahead of the print edition of the American Thoracic Society's American Journal of Respiratory and Critical Care Medicine.

In the study, a secondary analysis of data from a randomized, controlled trial of the effects of azithromycin on the frequency of AECOPD, no relationship was found between baseline Vitamin D levels and time to first AECOPD or between vitamin D levels and AECOPD exacerbation rates.

"Vitamin D insufficiency and deficiency are common in patients with COPD, and patients with severe COPD are at the highest risk for exacerbations, so we hypothesized that low vitamin D levels might increase the risk of AECOPDs," said Ken M. Kunisaki, M.D., of the Minneapolis Veterans Affairs Medical Center. "Our negative results are in contrast with earlier studies in which lower vitamin D levels were associated with higher rates of respiratory infections in adults and more frequent asthma exacerbations in children."

In the current study, mean forced expiratory volume in one second (FEV1) was 1.12L, 40% of predicted. Mean vitamin D level at baseline was 25.7 ± 12.8 ng/mL, with 33.1% of subjects categorized as vitamin D insufficient (?20 ng/mLbut <30 ng/mL), 32.0% as vitamin D deficient (<20 ng/mL) and 8.4% as having severe vitamin D deficiency (<10 ng/mL).AECOPDs were defined as a complex of respiratory symptoms (increased or new-onset) of at least 1 of the following: cough, sputum, wheezing, dyspnea, or chest tightness with a duration of at least 3 days and requiring treatment with an antibiotic or systemic corticosteroid.

In the primary analysis, vitamin D levels had no relationship to time to first AECOPD; for a 10 ng/mL increment in vitamin D level, the estimated hazard ratio was 1.04 (95% confidence interval: 0.97-1.12). In secondary analyses, vitamin D levels were not related to annualized rates of AECOPDs in either Poisson (p=0.82)or negative binomial analyses (p=0.87).

The study had some limitations. Vitamin D levels were only assessed at baseline, and so may have changed during the study period. Seasonal changes in vitamin D levels may also have occurred.

"Contrary to what we expected, baseline vitamin D levels were not related to the risk of subsequent AECOPDs in this large group of COPD patients at high risk of AECOPD," Dr. Kunisaki said. "Vitamin D supplementation is unlikely to have an effect on AECOPD risk in these patients."
- - - - - - - - - 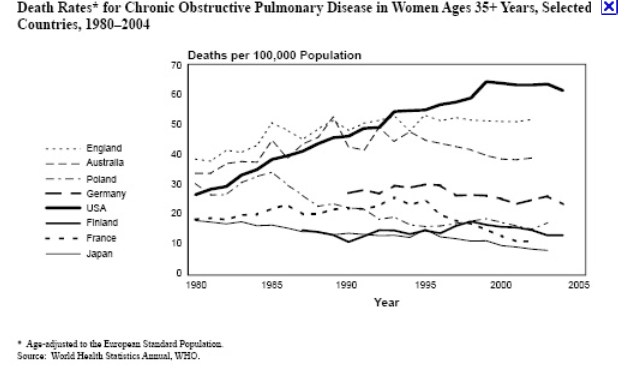 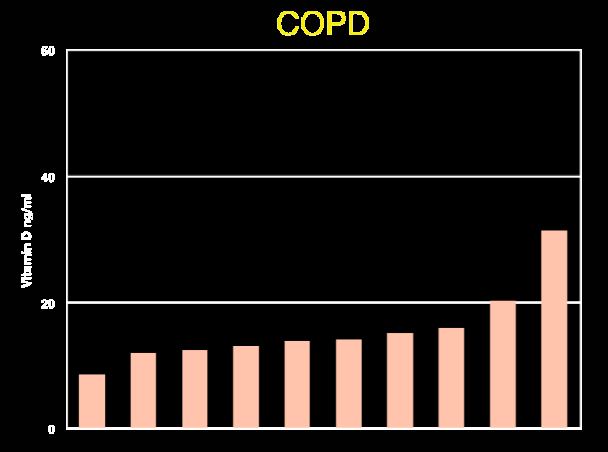 Less COPD if vitamin D more than 30 ng – Nov 2011         Printer Friendly PDF this page! Follow this page for updates
This page is in the following categories (# of items in each category)
Breathing 424

COPD reduce 2X if severely deficient and treated with 3,300 IU daily average ...Distorted Pros and Cons of Vitamin D - March 2013The worse the COPD the lower the levels of vitamin D – Aug 2012