Is Vitamin D Supplementation Responsible for the Allergy Pandemic – May 2012

Purpose of review A link between vitamin D supplementation and allergy was already suspected soon after it became possible to chemically synthesise vitamin D2 by means of ultraviolet radiation. During the past decade, the assumed allergenic effect was confirmed by clinical and epidemiological studies although the most recent discussion has centred more on vitamin D insufficiency. The purpose of this review is to summarise studies published during the past year while attempting to reconcile some apparent inconsistencies.

At least eight studies examined the association of early 25-hydroxy-vitamin D levels and atopic diseases in 2011, whereas no new study addressed the question of vitamin D supplementation in the newborn period. One study tested the whole range of 25-hydroxy-vitamin D levels in cord blood describing a U-shaped association with 2.4-fold odds ratio of low and 4-fold odds ratio of high levels to develop allergen-specific immunoglobulin E.

A supplement published by Nature in November 2011 summarised what allergy researchers currently know about the origins of the allergy epidemic: 'This […] is not a triumphant account of strategies that overcame allergy. Recent exploration of the complexities of the adaptive immune system has turned some assumptions about allergies upside down, and researchers are swimming in unfamiliar waters'.[1] This disillusioning view may be partially explained by the dominating hygiene hypothesis that could never been formulated as a true scientific hypothesis in a sense that it could be tested by a scientific method – either confirmed or refuted. It may be that real life circumstances do not follow formal logic. The situation from numerous observational studies in this area, however, is bizarre, most of them presenting a continuous flow of unconnected findings or arriving at contrary conclusions.

The interaction of the human adaptive immune system of 2 trillion lymphocytes is difficult to understand when it comes to the interaction with 100 trillion bacteria in the human gut or with the 1 quadrillion substances in the human environment. However, some progress appears to have been made in this area; a first interventional study[2] has shown that reduced helminthic load in pregnancy may prime allergy development in the offspring.

Only a small part of allergy research is currently dedicated to iatrogenic causes of the allergy epidemic. Nevertheless, it is a field of high potential in which we are dealing with clearly defined substances like micronutrients, vitamins, folate, antibiotics or paracetamol. A particularly interesting substance is vitamin D, used as a treatment for rickets since the 1920s. The substance has had a varied history until it was finally recommended by an European Union Directive in the 1990s as a baby food ingredient.[3] A link between vitamin D supplements and allergy was suspected as early as 1930 long before the modern vitamin D hypothesis was developed.[4] The rather speculative assumption in the 1990s was consecutively confirmed by clinical[5] and epidemiological studies[6,7] and mechanisms further elucidated by experimental data.[8] Vitamin D supplementation is unlikely to be the sole cause of the allergy pandemic but at least fair scientific evidence suggests that there is a risk for inducing allergy in the newborn.

Unexpectedly, however, vitamin D insufficiency[9,10] is now largely dominating the discussion.[11,12] Given the immunosuppressive function on respiratory infections this discussion is justified,[13] but it remains an unfortunate development with respect to allergy induction, in particular because this discussion is driven mainly by studies on serum levels of vitamin D that should not be confused with vitamin D supplement effects for several reasons.


Moreover, the discussion on the effects of vitamin D is becoming contentious possibly because of the complexity of the field. Studies are not cited correctly, vitamin D metabolites are not discriminated, or heavily biased towards beneficial effects of vitamin D.
Merging Two Old Concepts into a New One: Misdirected Epigenetic Programming

Before further summarising the studies on this topic published in 2011, two earlier concepts need to be introduced – Barker's early development[18] and Rose's smoking paradox[19] as both may help to understand the controversy around the vitamin D hypothesis.

David Barker pioneered the idea that the 20th century epidemic of coronary heart disease in Western countries might have originated in fetal life. Paradoxically, the epidemic coincided with improved standards of living and nutrition, yet in Britain its greatest impact was in the most deprived areas. Barker observed that early in the 20th century, these areas had the highest rates of neonatal mortality and by inference, the highest rates of low birth weight.[18] Based on that observation, Barker postulated that impaired fetal growth might have predisposed the survivors to heart disease in later life.

If we assume that early programming is a relevant factor for allergy as well (for example T-cell activation is already different at birth in allergy prone children),[20] maternal vitamin D levels may have an important function for presetting thresholds of vitamin D signalling and metabolism in the newborn. 25-hydroxy vitamin D crosses the placental barrier and 1,25-dihydroxy vitamin D is being largely synthesized in the fetus.[21] Effects may be simple induction or repression of genes of the cytochrome P450 superfamily that convert vitamin D metabolites,[22] a methylation of the vitamin D receptor itself[23] or by influencing various downstream interleukins.[24] Epigenetic decoupling of vitamin D feedback catabolism seems to play an important role in the placenta,[23] whereas it is becoming an important research question whether low maternal levels are ultimately leading to an upregulated vitamin D response in the newborn.

This may at least be expected from in-utero vitamin D-deficient mice that show a significant reduction in invariant NKT (iNKT) cell numbers that could not be corrected by later intervention with vitamin D.[25] Another example of in-utero priming of an allergic reaction has been shown by Hollingsworth who found multiple gene-associated loci, which were differentially methylated after in-utero supplementation with a methyl-rich diet.[26] These methylation changes were associated with decreased transcriptional activity and increased disease severity. It may be assumed that these are lasting effects by epigenetic cycles[27,28] explaining even more not very well understood phenomena.[27]

Rose's story is somewhat different[19] but equally important in that context. He considered two hypothetical populations in different settings. In the first setting, 50% are smokers, whereas in the second setting, 90% are smokers. If we assume an identical incidence of lung cancer in nonsmokers (two out of 100) and identical relative risks of 10, the proportion of population variation in lung cancer explained is 8.4% in the first, but, only 2.0% in the second setting. Even worse, in a third setting, wherein almost everyone smoked a pack of cigarettes a day, it would be impossible to find the real cause of lung cancer.

It is expected that ubiquitous supplement exposure of newborns – in analogy to the original Rose's paradox – will evoke a different reaction if a child has been raised in a low vitamin D intrauterine environment – in analogy to the original Barker paradox. Similar mechanisms have been described recently by the developmental origins of health and disease (DOHAD) movement that proposes that some disorders, such as type 2 diabetes and cardiovascular disease can result from an imbalance between the environments that are experienced in utero, in early infancy, and later life.[29] The Devereux[9] and Litonjua[10] studies in pregnant women therefore may have simply uncovered the higher sensitivity to the later supplement exposure – Vitamin Dtriggers and arms the immune system (Alleyne 2010). This sensitivity may be lost in later life as adults will adjust their vitamin D/calcium system to their own environment.[30]

The ubiquitous vitamin D exposure of all newborns in the Western world either by extra supplements or by general additive to baby food creates a great challenge for research. Effects will be extremely difficult to find in epidemiological studies – some studies may show effects with the dose of vitamin D.[6] Others with different pharmacological preparations of vitamin D[31] or gene variants related to vitamin D metabolism[32] or even show inverse associations[9] – this is what happened over the last decade in research on vitamin D and allergy.[13]

The final part of this review summarises human studies published in the last year relevant to vitamin D supplementation and the allergy pandemic (for effects of vitamin D in manifest diseases like asthma please refer to the accompanying article in this volume by Hollams). Due to space restraints, genetic studies are also not being reviewed here.

Liu et al. [34] did not find an association of 25-hydroxy-vitamin D status with food sensitization. The study included 649 children who were enrolled at birth although vitamin D insufficiency was defined by cord blood levels less than 11 ng/ml, and food sensitization as specific IgE at least 0.35 kU/l to any of eight common food allergens. Only when examined jointly with SNPs in the IL4 gene was an association seen in which vitamin D insufficiency increased the risk of food sensitization among children carrying CC/CT genotypes[Odds ratio (OR) = 1.8, 95% confidence limit = 1.2–2.8].

The study of Chi et al. [37] provided many functional details from an inner-city birth cohort of 520 newborns who had at least one atopic parent. Umbilical cord plasma concentration of 25-hydroxy-vitamin D and the cytokine responses of cord blood mononuclear cells were compared under stimulation of phytohaemagglutinin, lipopolysaccharide and peptidoglycan. Most cytokine responses were not correlated with 25-hydroxyvitamin D concentration except a weakly positive association of IFNg release after lipopolysaccharide and a negative association with the proportions of CD25þ subset cells to total CD4þ T cells. As the suppressive activity of CD4þ25þ cells was not altered a clear picture did not emerge.

The study in New Zealand by Camargo et al. [38] solved a conundrum introduced by previous studies that did not distinguish between wheezing illness and asthma. In this new study, cord blood from 922 newborns was tested for 25-hydroxy-vitamin D and parents were asked if their child had a history of respiratory infection. As expected 25-hydroxyvitamin D had an inverse association with risk of wheezing by 3 months, 15 months, 3 years, and 5 years of age whereas no association with atopy or incident asthma was found.

In another study of the same group,[40] cord blood 25-hydroxy-vitamin D was measured in 219 children as well as specific IgE levels to six aeroallergens measured at age 1, 2, 3, and 5. Relative to the reference group both low (<50 nmol/l, P = 0.006) and high (?100nmol/l, P = 0.04) levels were associated with increased total immunoglobulin (Ig)E. Also allergen-specific IgE levels (OR = 2.4, P = 0.03 and OR = 4.0, P = 0.01, respectively) were increased; however, no association with allergic rhinitis or asthma was found. This is interesting because such a U-shaped relationship has also been found also in our own[41] but also other studies.[42]
Conclusion

To solve these vexing questions, we probably need a shift in research priorities[43] away from observational studies and study parameters of limited use. The plethora of positive associations of serum 25-hydroxy-vitamin D and cardiovascular disease have only recently been decided by a controlled trial.[44] We probably do not need any further observational studies in allergy research but randomized clinical trials of vitamin D supplements, starting in pregnancy and extending over the newborn period with final outcomes measured at later ages (Fig. 1). There are also numerous biological readouts that could accompany those trials to identify biological pathways using DNA methylation, gene expression pattern or proteomics data from relevant cell subsets. Such trials could ultimately show everything about vitamin D[45] to get the most benefit for the health of our children. 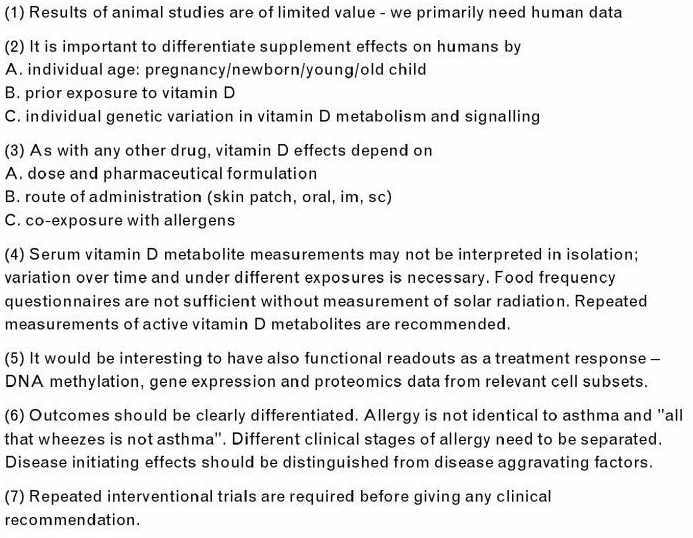 Papers of particular interest, published within the annual period of review, have been highlighted as:
* of special interest
** of outstanding interest

Is Vitamin D Supplementation Responsible for the Allergy Pandemic – May 2012         Printer Friendly PDF this page! Follow this page for updates
This page is in the following categories (# of items in each category)
Pregnancy 826 Autoimmune 184