Higher Vitamin D in US seniors if older, female, not smoke, but LOWER for each in China – Dec 2019 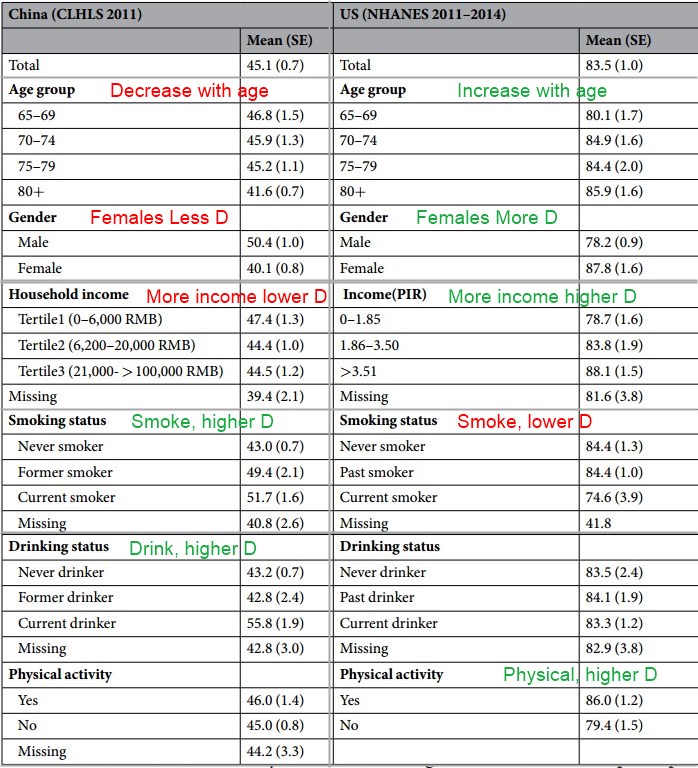 Unedited Table 2 is at the bottom of this page

Vitamin D deficiency is a common health concern worldwide. We aim to compare the prevalence of vitamin D deficiency among older adults (65+) in China and the United States (US). We used data from the 2011 wave of Chinese Longitudinal Healthy Longevity Survey (CLHLS) in China (n = 2180), and 2011-2014 National Health and Nutrition Examination Survey (NHANES) in the US (n = 2283). Serum 25-hydroxyvitamin D [25(OH)D] was measured and a level of under 30/50 nmol/L was defined as vitamin D severe deficiency/deficiency. Risk factors of vitamin D deficiency were examined by multivariate regression models. We found that the mean 25(OH)D concentration was lower in China than in the US (45.1 vs. 83.5 nmol/L), with Chinese elderly lower than American elderly for every age group. 70.3% in China and 17.4% in the US were considered as vitamin D deficiency (30.6% and 3.4% were considered as severe deficiency). Older age, females, ethnic minorities, higher household income, self-rated "very bad" health, and never drinkers, were statistically significant in predicting lower serum 25(OH)D levels in China. In the US, males, ethnic minorities, lower income, self-rated "very bad" health, physically inactive, overweight, and obese were related to lower serum 25(OH)D levels. Our findings suggest that different interventional strategies are needed to improve vitamin D deficiency and its associated negative health outcomes in China and the US.

Higher Vitamin D in US seniors if older, female, not smoke, but LOWER for each in China – Dec 2019         Printer Friendly PDF this page! Follow this page for updates
This page is in the following categories (# of items in each category)
Deficiency of Vitamin D 404 Seniors 367 Orient 61