High vitamin D levels in Romanian children – wonder why – May 2015

Vitamin D Status: A Different Story in the Very Young versus the Very Old Romanian Patients. 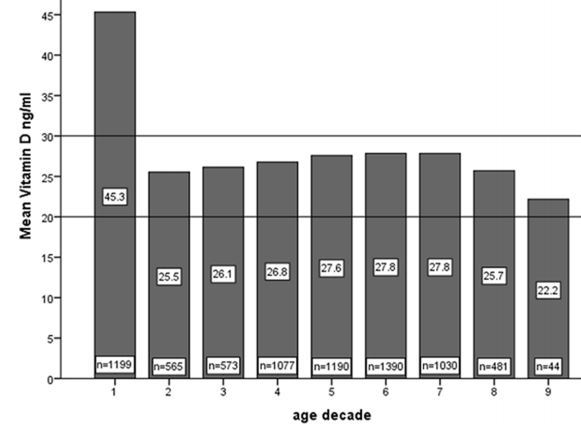 CONCLUSION:
In Romania, suboptimal vitamin D levels are common (59%), especially in older age, wintertime and in women. Vitamin D supplementation would be most warranted from January to April in the Romanian population. 25-hydroxyvitamin D levels > 100 ng/ml were relatively prevalent in children 0-1 year old (17.3%). This was attributed to supplementation errors and the fact that high-risk individuals were more likely to visit for medical check-up. Nonetheless, it stresses the need to increase awareness of the importance of preventing Vitamin D supplementation administration errors in the young.

Answer may be in the PDF: half of the patients were under the care of Endocrinologists - who may have prescribed lots of vitamin D

High vitamin D levels in Romanian children – wonder why – May 2015         Printer Friendly PDF this page! Follow this page for updates
This page is in the following categories (# of items in each category)
Vitamin D in Europe 210 Infant-Child 663