“What we’ve shown is a clear association with diabetes and cognitive aging in terms of the slope and the rate of decline on these cognitive tests,” said Dr. Kristine Yaffe, a professor of psychiatry and neurology at the University of California, San Francisco. “That’s very powerful.”

Previous studies have shown that Type 2 diabetes correlates with a higher risk of Alzheimer’s disease and dementia later in life.

The researchers looked at 3,069 people, many of them in their 70s. When the study began, 23 percent of the subjects had diabetes.

But nine years later, the gap in cognitive test scores had widened significantly between those with and without diabetes.
– – – – – – – – – 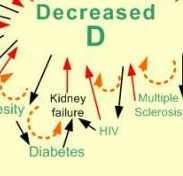 Diabetes reduces vitamin D levels which reduces cognition – June 2012         Printer Friendly PDF this page! Follow this page for updates
This page is in the following categories (# of items in each category)
Deficiency of Vitamin D 392 Diabetes 479 Cognitive 302

The Startling Link Between Sugar and Alzheimer&#039;s