Several articles on this page

Got the suggestion from: The Complete Book of Bone Health - Diane Schneider - 2011

Osteoporosis and type 2 diabetes mellitus (T2DM) are now prevalent in aging and westernized societies, and adversely affect the health of the elderly people by causing fractures and vascular complications, respectively. Recent experimental and clinical studies show that both disorders are etiologically related to each other through the actions of osteocalcin and adiponectin. Meta-analyses of multiple clinical studies show that hip fracture risk of T2DM patients is increased to 1.4 to 1.7-folds, although BMD of the patients is not diminished. Vertebral fracture risk of T2DM patients is also increased, and BMD is not useful for assessing its risk. These findings suggest that bone fragility in T2DM depends on bone quality deterioration rather than bone mass reduction. Thus, surrogate markers are needed to replace the insensitivity of BMD in assessing fracture risks of T2DM patients. Markers related to advanced glycation end products as well as insulin-like growth factor-I may be such candidates, because these substances were experimentally shown to modulate bone quality in DM. In practice, it is important for physicians to assess fracture risk in T2DM patients by evaluating prior VFs and fracture histories using spine X-ray and interview, respectively, until the usefulness of surrogate markers is established. 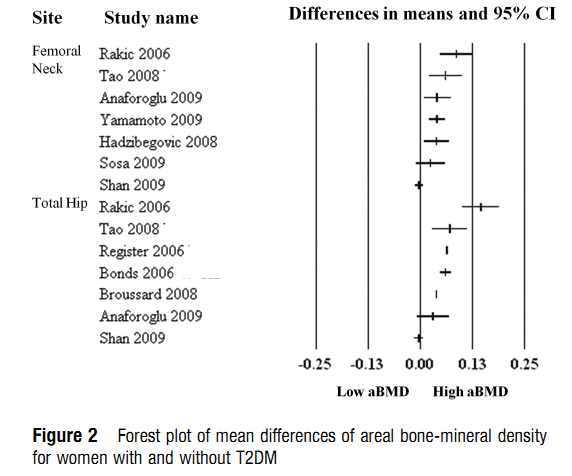 Results: We found a total of 13 studies that met the inclusion criteria for this review. The majority of the studies used dual X-ray absorptiometry (DXA) and showed either higher or similar areal bone mineral density (aBMD) for older adults with T2DM relative to healthy controls. Studies using more advanced imaging suggested that there may be differences in bone geometry between older adults with and without T2DM.

Osteoporosis and risk of fracture in patients with diabetes: an update.

Diabetes mellitus (DM) and osteoporotic fractures are two of the most important causes of mortality and morbidity in older subjects. Recent data report a close association between fragility fracture risk and DM of both type 1 (DM1) and type 2 (DM2). However, DM1 is associated with reduced bone mineral density (BMD), whereas patients with DM2 generally have normal or increased BMD. This apparent paradox may be explained by the fact that, at a given level of BMD, diabetic patients present lower bone quality with respect to non-diabetics, as shown by several studies reporting that diabetes may affect bone tissue by means of various mechanisms, including hyperinsulinemia, deposition of advanced glycosylation endproducts (AGEs) in collagen, reduced serum levels of IGF-1, hypercalciuria, renal failure, microangiopathy and inflammation. In addition, the propensity to fall and several comorbidities may further explain the higher fracture incidence in DM patients with respect to the general population. It is reasonable to expect that close metabolic control of diabetes may improve bone status, although its effect on reduction of fracture risk has not yet been demonstrated. However, metformin has a direct effect on bone tissue by reducing AGE accumulation, whereas insulin acts directly on osteoclast activity, and thiazolidinediones (TZD) may have a negative effect by switching mesenchymal progenitor cells to adipose rather than bone tissue. New prospects include the incretins, a class of antidiabetic drugs which may play a role linking nutrition and bone metabolism. Better knowledge on how diabetes and its treatments influence bone tissue may lie at the basis of effective prevention of bone fracture in diabetic patients. Thus, close glycemic control, adequate intake of calcium and vitamin D, screening for low BMD, and prevention and treatment of diabetic complications are key elements in the management of osteoporosis in both DM1 and DM2. Attention should be paid to treating diabetes with TZD in women with DM2, particularly if elderly. Lastly, patients with osteoporosis and diabetes should be offered the same pharmacological treatments as non-diabetics, although specific trials on the effects of anti-osteoporotic drugs in the diabetic population are lacking.

Diabetes increases probability of bone fracture         Printer Friendly PDF this page! Follow this page for updates
This page is in the following categories (# of items in each category)
Bone - Health 284 Diabetes 479