SIR—Unintentional falls are a common occurrence among older adults, affecting ~30% of persons aged 65 years and older annually [1]. One of the most serious fall outcomes is hip fracture, an injury that often results in long-term functional impairment, nursing home admission and increased mortality [2]. More than 90% of hip fractures are caused by falls [3], usually by falling onto the hip [4]. In 2006 there were ~293,000 hospital admissions for hip fracture [5]. Osteoporosis, a metabolic disease characterised by low bone mineral density (BMD) and bone structure deterioration, greatly increases the chances that a person who falls will sustain a hip fracture [6]. The National Osteoporosis Foundation estimates that more than 10 million people over age 50 in the United States have osteoporosis and another 34 million have low BMD and are at risk for the disease [7].

Extending an earlier and less comprehensive analysis [8], this study used hospital discharge data to analyse the national trends in hip fracture rates from 1990 to 2006 for people aged 65 years and older by both sex and 10-year age groups.

This study used data from the National Hospital Discharge Survey (NHDS) [5], a national probability survey of inpatient discharges from nonfederal, short-stay hospitals in the United States. Conducted by the National Center for Health Statistics (NCHS), the NHDS collects data annually from a sample of ~270,000 inpatient records obtained from a national sample of ~500 hospitals. Only hospitals with an average length of stay of fewer than 30 days for all patients, general hospitals or children’s general hospitals are included in the survey. Federal, military and Department of Veterans Affairs hospitals, as well as hospital units of institutions (such as prison hospitals), and hospitals with fewer than six beds staffed for patient use, are excluded.

Because of the complex multistage design of the NHDS, the survey data is weighted in order to produce national estimates. The estimation procedure produces essentially unbiased national estimates and has three basic components: inflation by reciprocals of the probabilities of sample selection, adjustment for nonresponse and population weighting ratio adjustments [9].

Hip fracture hospitalisations were defined as cases with a first-listed diagnosis coded 820, according to the International Classification of Diseases, Ninth Revision, Clinical Modification (ICD-9-CM) [10]. The estimated number of hip fractures for men and women aged 65 and older, rates per 10,000 (age-adjusted to the 2000 US population) and standard errors were derived by the NCHS using SUDAAN, which takes into account the complex sampling design. These data are available at www.cdc.gov/nchs/hdi.htm. Trend analyses were conducted with Joinpoint software. The Joinpoint regression programme tests whether a multi-segmented line fits the data better than a straight line (Joinpoint Regression Program, version 3.3, National Cancer Institute). The models incorporated both the estimated annual hospitalisation rates as well as the standard error of the estimated rates. The tests of significance used a Monte Carlo permutation method. A P-value ?0.05 was considered statistically significant. 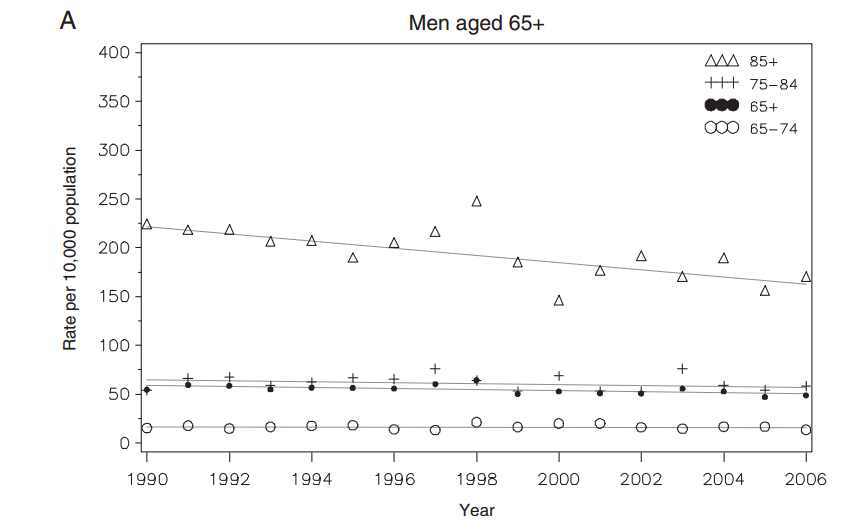 This study found that the age-adjusted hip fracture hospitalisation rates for both men and women in the United States declined significantly from 1990 to 2006. These findings are consistent with our earlier study [8]. Similar trends have been observed in other countries. Kannus et al. [11] reported that national age-adjusted hip fracture rates in Finland for people aged 50 and older peaked in 1997 and declined 20% for women and 6% for men from 1997 to 2004. We found a similar pattern but only among women aged 85 and older. Smaller studies in Sweden [12], Norway [13], Denmark [14] and Canada [15] have also reported declines in hip fracture rates.

We considered a number of possible explanations. Although BMD screening and osteoporosis treatment can reduce hip fractures [16, 17], low screening rates among Medicare beneficiaries [18] and patients’ underuse of bisphosphonates [19, 20] suggest that other factors are contributing to the declining hip fracture rates. Improvements in functional abilities among older adults [21] could be helping to reduce falls and subsequent hip fractures. Although exercise that improves balance and lower body strength is effective in reducing falls [22, 23], such exercise programmes are not readily available in the United States. Other possible explanations include a cohort effect of a healthier ageing population, improved nutrition, decreased use of psychoactive drugs to decrease fall risk and the protective effect of increased average body weight and body mass index [24]. Finally, it is likely that some of the observed decrease is due to unknown protective factors. Additional research is needed to identify factors contributing to declining hip fracture rates, both in the United States and in other countries, in order to maintain this trend.

A limitation of this study is that NHDS collects data from a sample of inpatient records acquired from a national sample of hospitals, not from a patient registry. Because persons with multiple discharges during the year may be sampled more than once, estimates are for discharges, not persons. Hip fracture diagnoses are confirmed by X-ray so it is unlikely that this injury would have been incorrectly coded. However, there are no studies validating the coverage and accuracy of hip fracture data in the NHDS. In addition, because federal, military and Department of Veterans Affairs hospitals, hospital units of institutions and hospitals with fewer than six patient beds are excluded, these hip fracture rates may be somewhat underestimated.

The US population is ageing rapidly. There are now 35 million people aged 65 and older and by 2030 this number will exceed 71 million. People over age 85 are the fastest growing segment of the older population and have the highest hip fracture rate. Over time, the absolute number of hip fractures will increase. Primary and secondary prevention efforts remain important strategies for reducing falls and resulting hip fractures. For high-risk older men and women, hip fracture prevention involves increased osteoporosis screening and treatment. For the general older adult population, prevention must include education about osteoporosis risk factors, the value of adequate dietary intake of calcium and vitamin D and the importance of weight bearing exercise; access to accessible and affordable BMD screening programmes; and dissemination and implementation of effective community-based fall prevention programmes [23].

Printer Friendly PDF this page! Follow this page for updates
This page is in the following categories (# of items in each category)
Falls and Fractures 212
Edit Comments Files 2