Note: It was widely reported on the internet in Oct 2012 that colds not stopped by vitamin D

At the bottom of this page is a list of some of the titles reporting on this study - without reading it.''

Objective To determine the effect of vitamin D supplementation on incidence and severity of URTIs in healthy adults.

Results The mean baseline 25-OHD level of participants was 29 (SD, 9) ng/mL. Vitamin D supplementation resulted in an increase in serum 25-OHD levels that was maintained at greater than 48 ng/mL throughout the study.

There were 593 URTI episodes in the vitamin D group and 611 in the placebo group, with

These findings remained unchanged when the analysis was repeated by season and by baseline 25-OHD levels.

Conclusion In this trial, monthly administration of 100 000 IU of vitamin D did not reduce the incidence or severity of URTIs in healthy adults.

Both groups started with an adequate amount of vitamin D: 30 ng/ml 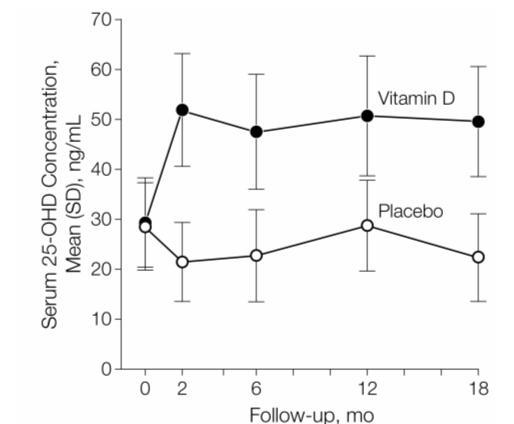 Note! 80% of Australia probably has < 30 ng/ml
Vitamin D would probably have helped prevent colds/flu in the 80% of Australia which have low levels of vitamin D
Suspect that this study just took students and staff who were healthy, were white (95%), fit, only 5% smoked, and did not have diabetes (2%)
thus ignoring the Australian's who were at high risk of being vitamin D deficient, due to:
: dark skin, overweight, elderly, pregnant, recovering from surgery, digestive problems, etc.

(After trying 7 times, have been unable to download the PDF even once) 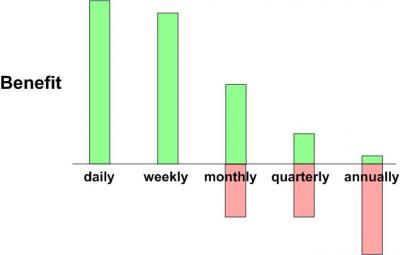 Half-life of vitamin D varies has the following chart 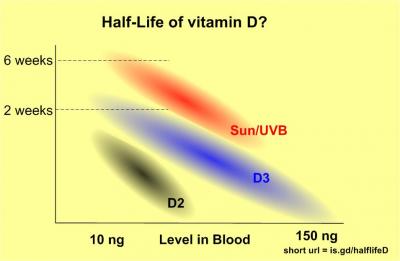 Reduce probability of getting the Flu