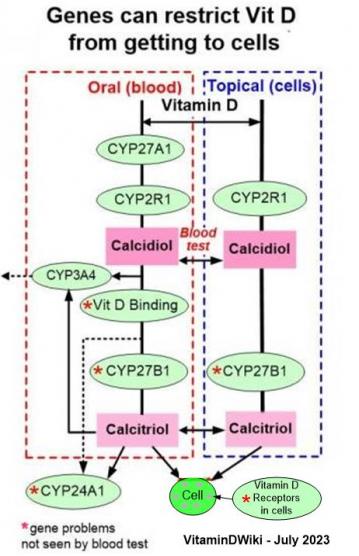 PDF attached was created Nov 8, 2017 by VitaminDWiki – the PDF download function was not working at the publisher’s site
&nbspDownload the PDF from VitaminDWiki

CYP24A1, encoding the vitamin D-24-hydroxylase, is of major clinical and physiologic importance, serving to regulate the catabolism of 1,25-(OH)2D, the physiologically active vitamin D metabolite. In addition to facilitating catabolism of 1,25-(OH)2D, CYP24A1 also enhances the turnover and elimination of 25-OHD, the abundant precursor metabolite and storage form of the vitamin. CYP24A1 can be stimulated hormonally by 1,25-(OH)2D and by FGF23, whereas CYP27B1, encoding the vitamin D-1α-hydroxylase, is stimulated hormonally by parathyroid hormone (PTH) and downregulated by FGF23. Thus CYP24A1 and CYP27B1, together, provide for alternate and regulated fates of 25-OHD, and control the availability of the active metabolite, 1,25-(OH)2D, depending upon physiologic needs. These two enzymes, are therefore central to the homeostatic control of vitamin D metabolism, and as a result affect calcium metabolism in critical ways.
Disruption of CYP24A1 in mice results in elevated circulating 1,25-(OH)2D, substantiating the importance of the enzyme in the maintenance of vitamin D metabolism. The consequential skeletal phenotype in these mice further demonstrates the biologic sequelae of the disruption of the vitamin D pathway, and illustrates a specific developmental pathology mediated largely by oversupply of 1,25-(OH)2D.
More recent evidence has identified loss of function mutations in CYP24A1 in association with

Initial reports described certain variant mutations in CYP24A1 as an unrecognized cause of "Idiopathic Infantile Hypercalcemia," and more recently older children and adults have been identified with a similar phenotype.

Over 25 likely disease-causing variants are described. Homozygous and compound heterozygote mutations account for the overwhelming majority of cases, however the heterozygous loss-of-function mutations of CYP24A1 do not appear to consistently result in symptomatic hypercalcemia. Considerations ripe for exploration include the potential role for such mutations in the tolerance to challenges to the calcium homeostatic system, such as changes in dietary calcium intake, vitamin D supplementation, sunlight exposure or pregnancy.