Since the 1990s body impedance has been used to estimate human body fat
As of 2019 there are > 100 weight scales on Amazon can estimate body fat
They range in cost from about $30 to $90
The outputs are typically one of the following: visual, wifi, and Bluetooth
Estimate, not measure: Fairly repeatable, but accuracies are about 30%
Estimation varies with age, male/female, hydration, etc. etc.
Note - only one of the Amazon devices measure upper-body impedance (with a device you hold in your hands)
Doubt that the scales costing <$30 actually work
some commenters noticed that the reading did not change when they wore socks, stood on Al foil, etc,

Observations by the founder of VitaminDWiki

As an undergraduate, I estimated fat thickness with 950MHz radio waves
As an instrumentation engineer, I measured lots of quantities - including phase angle
I foresee the possibility that Vitamin D can be estimated by a bathroom scale purchased for $100 on Amazon
My guess is that it will be able to estimate vitamin D levels within 10 nanograms (see parameters below)

Phase Angle: A Possible Biomarker to Quantify Inflammation in Subjects with Obesity and 25(OH)D Deficiency

Obesity is associated to chronic low-grade metabolic inflammation and hypovitaminosis D. Among extra-skeletal effects, an important role in inflammation has been described for vitamin D (25(OH)D). Phase angle (PhA) is a bioelectrical impedance analysis (BIA) parameter that represents an indicator of cellular health in chronic inflammatory states. However, it is still unknown whether a low 25(OH)D levels might correlate with PhA in obesity. Considering the lack of evidence correlating the 25(OH)D levels with PhA in obesity, the aim of this study was to investigate their possible relationship in a group of patients with obesity stratified according to body mass index (BMI) categories. Four hundred and fifty-five adult subjects (219 males and 236 females; 36 ± 11 years) were enrolled. Body composition, including PhA, was assessed using a BIA phase-sensitive system. Serum levels of 25(OH)D was determined by a direct competitive chemiluminescence immunoassay. Most of the participants were affected by grade III obesity (24%) and had 25(OH)D deficiency (67%). Subjects with 25(OH)D deficiency had highest BMI (p < 0.001). Stratifying the sample population according to the BMI classes, 25(OH)D levels decreased significantly along with the increase in BMI (p < 0.001), with the lowest 25(OH)D levels in the class III obesity. In addition, stratifying the sample population according to 25(OH)D categories, BMI and fat mass (FM) decreased, while PhA increased significantly along with the 25(OH)D categories (p < 0.001). The 25(OH)D levels showed significant positive associations with PhA (r = -0.59, p < 0.001), and this association remained significant also after adjusting for BMI and FM (r = 0.60, p < 0.001). The lowest values of PhA were significantly associated with the severity of obesity (OR 0.3, p < 0.001) and of 25(OH)D deficiency (OR 0.2, p < 0.001). To compare the relative predictive power of body composition parameters associated with the 25(OH)D levels, we performed a multiple linear regression analysis. The most sensitive and specific cut-off for 25(OH)D levels to predict the PhA above the median was >14 ng/mL (p < 0.001). In conclusion, we provided preliminary insights into a novel link between 25(OH)D levels and PhA in the setting of obesity. This association uncovered a new potential usefulness of PhA as expression of cell membrane integrity and predictor of inflammation in low 25(OH)D status that might help in identifying high-risk patients with obesity who could benefit from careful 25(OH)D supplementation.
&nbspDownload the PDF from VitaminDWiki 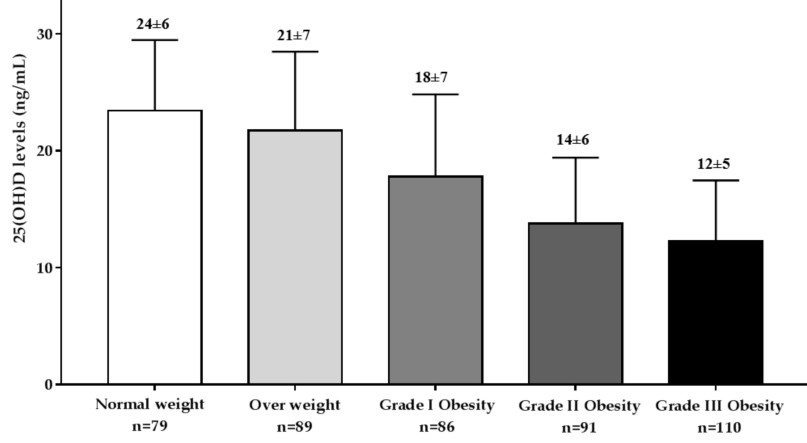 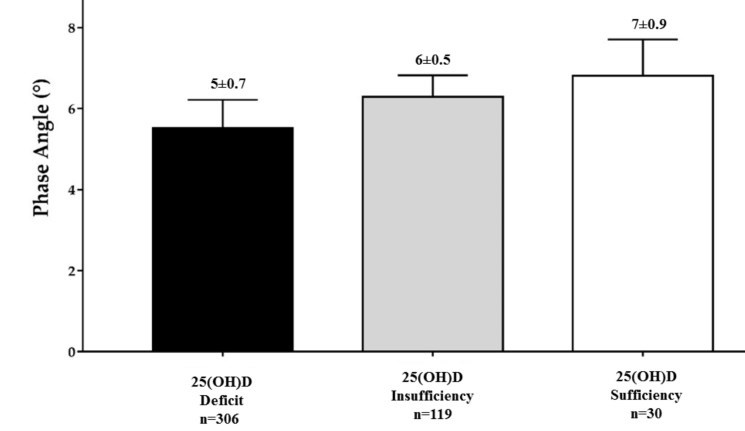 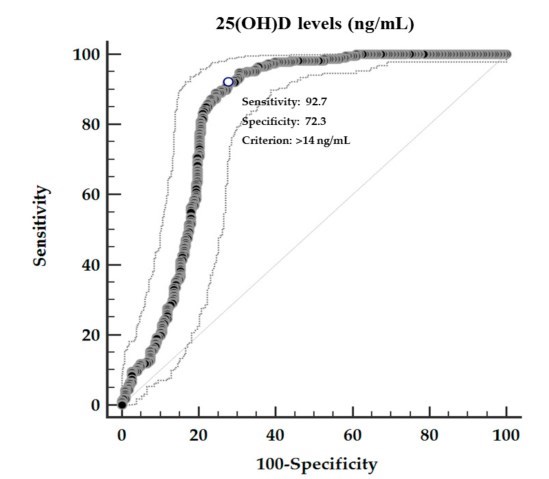 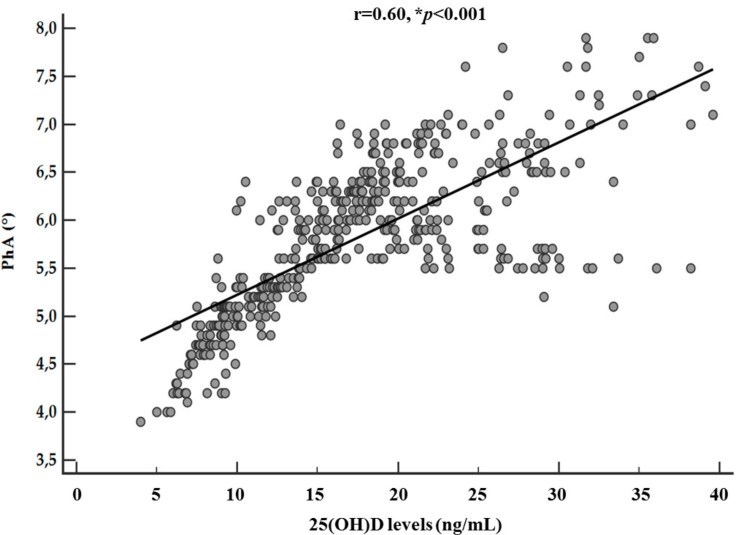 Phase angle, by itself, would be a very poor estimate of Vitamin D status 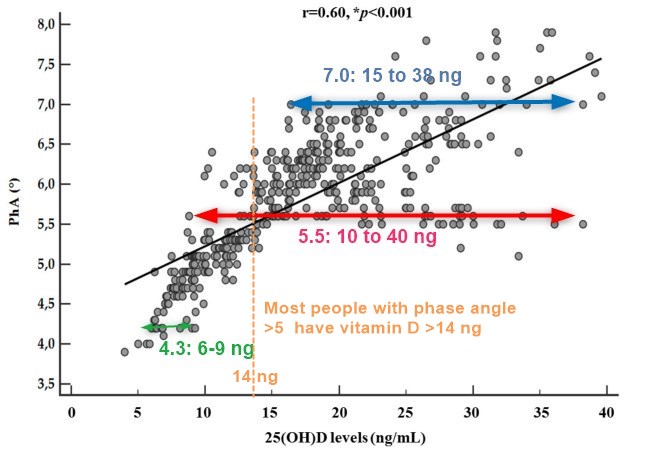 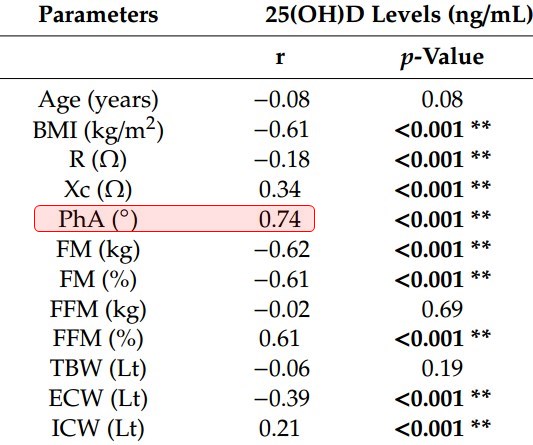 A few of the Body Impedance studies


Phase angle chart from the web 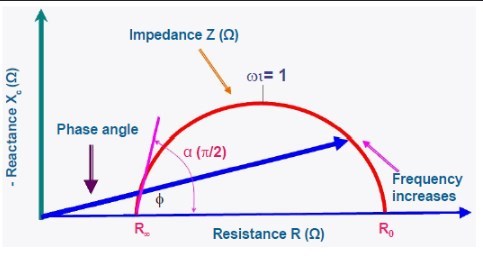 Body represented as a network of capacitors and resistors 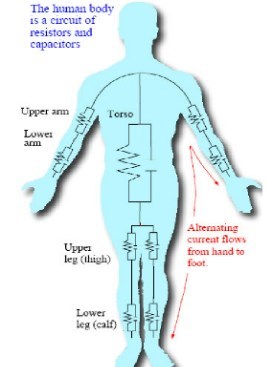 Body impedance can estimate body fat, and perhaps Vitamin D – Sept 2019         Printer Friendly PDF this page! Follow this page for updates
This page is in the following categories (# of items in each category)
Tests for Vitamin D 149