Childhood asthma and vitamin D deficiency in Turkey: is there cause and effect relationship between them?

Methods: This cross-sectional study was carried out on 170 children consisted of 85 who were asthmatic and 85 who were not, aged 2 to 14?years in Tekirdag, Turkey, from September 2009 to May 2010. Children?s basal serum D vitamin levels were determined, and their eating habits, vitamin D intake, exposure to sunlight and use of health services during the previous year were investigated. The severity of asthma and levels of asthma control were assessed according to the Global Initiative for Asthma guidelines.

Results: The difference between mean vitamin D levels in the asthmatic group (mean +/- SD) 16.6 +/- 8.5?ng/mL and the healthy control group (mean +/- SD) 28.2 +/- 19.5?ng/mL was found to be statistically significant (p?<?0.001). Children in the asthma group had less exposure to sunlight and ate a diet less rich in vitamin D (p?<?0.001). A significant difference was observed between the groups regarding the frequency of respiratory tract infections leading to emergency unit admissions and number of hospitalizations (p?<?0.001). It was also shown that a decrease in vitamin D level increased the severity of asthma (p?<?0.001) and decreased the frequency of controlled asthma (p?=?0.010).

Conclusion: This study has demonstrated the correlation between plasma 25 (OH) D levels and childhood asthma. Evidently, this relationship being influenced by multiple factors other than vitamin D, further studies should be conducted to explore the interrelation between all such factors.

Severity of Asthma vs Vitamin D 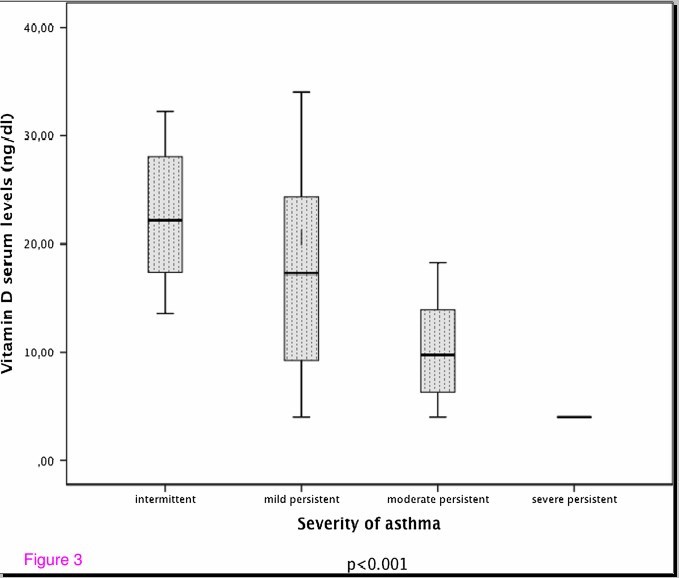 
Provisional PDF is attached at the bottom of this page

Asthma strongly related to vitamin D deficiency in Turkey – Dec 2013         Printer Friendly PDF this page! Follow this page for updates
This page is in the following categories (# of items in each category)
Breathing 424 Middle East 148