Oral supplementation
To ensure almost all patients receive sufficient vitamin D, a daily dose of 125 mg (5000 IU) is required for older people, aged 65 and above, while for younger patients, below the age of 65, a rate above 50 mg (2000 IU) was sufficient. The results applied whether Vitamin D was taken daily or as a bolus oral supplementation. Adults classed as deficient were those with levels of 25-hydroxyvitamin D less than 75 nmol/L.

The researchers further concluded that several regimens, such as loading with a high dose (12500 mg) of vitamin D3 and then giving 1250 mg monthly, provide enough vitamin D3 for most patients to achieve and maintain 25(OH)D levels at or above 75 nmol/L.

According to the research review, a promising loading regimen is to provide calcidiol (25(OH)D) itself.

Since information on repletion with vitamin D2 has been published recently, the researchers decided to focus on the use of vitamin D3 from dietary supplements, prescriptions for large oral doses, and bolus dosing or injections.

Most published dosing regimens failed to achieve 75 nmol/L in almost all subjects, whether young adults (below 65 years) or older adults (above 65 years).
The authors, Susan Whiting, College of Pharmacy and Nutrition, University of Saskatchewan, Canada, and Mona Calvo, US Food and Drug Administration, noted many differences among studies, including baseline levels, endpoints, study duration, and compliance.

Adverse effects
All the studies reviewed reported that subjects were free of adverse effects, indicating that the vitamin D3 protocols were safe during the observed dosing periods.
Meanwhile, the researchers noted that: “Vitamin D insufficiency and deficiency is at epidemic proportions worldwide. In temperate countries more than half of the population is at risk and worldwide, even in tropical countries, vitamin D deficiency is a very serious concern due to changes in living and working conditions.”

Vitamin D has been shown convincingly to have many functions beyond its role in calcium and bone health, they added. In addition to maintaining normal blood levels of calcium and phosphorus, Vitamin D aids in the absorption of calcium, helping to form and maintain strong bones. Recently, research also suggests vitamin D may provide protection from osteoporosis, hypertension, cancer, and several autoimmune diseases.

PDF is attached at bottom of page


We conducted an examination of recent studies to determine whether older adults (>/=65 years) need higher levels of supplementary vitamin D than young adults when attempting to replete vitamin D status in deficient subjects, i.e. those with levels of 25-hydroxyvitamin D less than 75 nmol/L. As data on repletion with vitamin D(2) have recently been published, we restricted our discussion to the use of vitamin D(3) from dietary supplements, prescriptions for large oral doses, and bolus dosing or injections. Most published dosing regimens failed to achieve 75 nmol/L in most all subjects, whether young adults (<65 years) or older adults (>/=65 years). Whether as daily or bolus oral supplementation, elderly subjects appeared to need more vitamin D3 compared with younger adults, however, baseline levels, endpoints, study duration, compliance, and other factors were different among studies.

To ensure most subjects are replete in vitamin D, a daily dose of more than 50 mug (2000 IU) in younger and 125 mug (5000 IU) is required. Other strategies including bolus and loading doses are described. No study reported adverse effects of using oral intakes about the current upper level of 50 mug (2000 IU).
PMID: 20440693 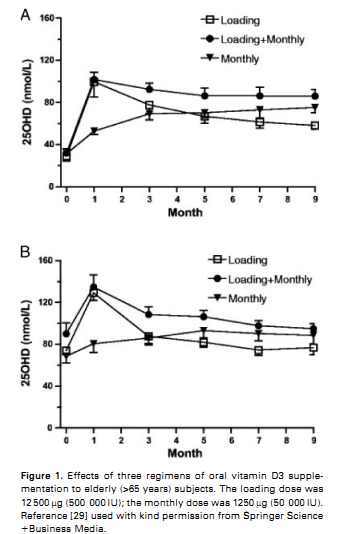 Patients older than 65 needed 5,000 IU vitamin D daily – May 2010         Printer Friendly PDF this page! Follow this page for updates
This page is in the following categories (# of items in each category)