Large geographical variations in dental health and tooth loss among U.S. adolescents and young adults have been reported since the mid-1800s.

Studies in the 1920s and 1930s noted that vitamin D and ultraviolet-B (UVB) irradiance reduced caries formation, the proposed mechanism being improved calcium absorption and metabolism.

This paper reviews the history of studies of dental caries with respect to vitamin D, geographical location and available solar UVB doses.

In addition, data on mean dental health rank by state for U.S. servicemen from three periods, 1918, 1934 and 1943, were used in regression analyses with respect to summertime solar UVB doses and an index for mottled enamel, a proxy for natural fluoridation of drinking water, for 1935.

There was a significant inverse correlation for dental health rank with respect to solar UVB from doses of 4.0 to 6.5 kJ/m2 with little change thereafter. Adding data for mottled enamel rates for the states with UVB doses <6.6 kJ/m2 improved the adjusted R2 from 0.45 to 0.52.

The mechanism whereby UVB reduces risk of dental caries is likely through production of vitamin D, followed by induction of cathelicidin and defensins, which have antimicrobial properties.

Serum 25-hydroxyvitamin D concentrations at or above 30-40 ng/ml should significantly reduce the formation of dental caries.

It is unfortunate that the UVB and vitamin D findings were not given more consideration in the 1950s as a way to reduce the risk of dental caries when water fluoridation was being proposed. 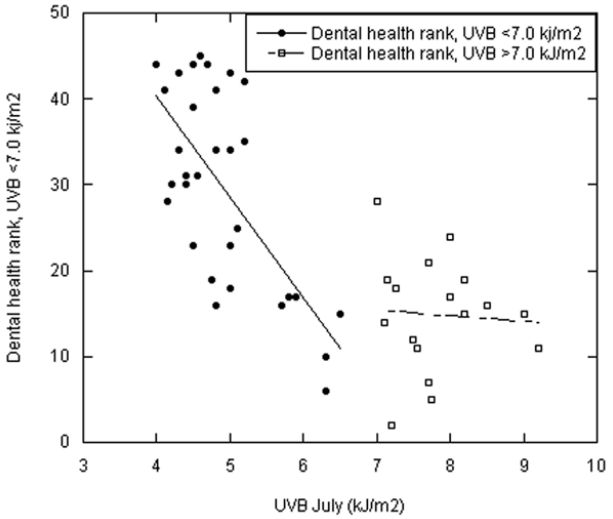 Note: the units in this chart are NOT the same as the UV index

PDF of paper is attached at the bottom of this page

Portions of paper extracted here for ease of translation

These results indicate that from the mid-1800s through the 1980s, solar UVB was inversely correlated with dental caries and tooth loss among adolescents and young men. Tooth loss and dental caries rates between low- and high-UVB-dose states in the mid-1800s and 1933 differed by factors of three. In both periods, little to no understanding existed of the role of UVB or vitamin D in reducing risk of dental caries.

Although the original mechanism proposed for UVB and vitamin D related to calcium metabolism,7 the effect is at least as likely to involve vitamin D and its induction of the antimicrobials cathelicidin and defensins as already noted to be important in periodontis.28 In recent years several papers have discussed how cathelicidin and defensins reduce the risk of dental caries through attacking oral bacteria linked to dental caries.29-35 However, these papers apparently did not discuss the involvement of vitamin D in the process. These polypeptides reduce the risk of several other types of bacterial infections, such as tuberculosis,36 pneumonia,37,38 and severe sepsis.39-41 In 1928, Mellanby7 stated "It is interesting to note that even in sections of teeth in which caries appears to be completely arrested the dentinal tubules may contain micro-organisms. These, however, are apparently inactive."

The serum 25(OH)D 'level' necessary for dental caries reduction does not appear to have been worked out in detail, but it might be inferred from studies of other diseases. Serum 25(OH) D level-cancer incidence relations for breast and colorectal cancer start to flatten around 30-40 ng/mL.44 This value is in accord with a recent observational study on incidence of influenza, which found 38 ng/mL to be the lower end of the optimal range.45 Vitamin D confers many health benefits, including reduced risk of cancer and infectious diseases, as mentioned earlier, as well, it is suggested, of cardiovascular disease and type 2 diabetes mel-litus,46 autoimmune diseases, falls, fragility fractures and many other diseases47 and may improve physical fitness48 and age-adjusted brain function.49 It was estimated that if all Americans could raise their serum 25(OH)D levels to more than 40 ng/mL, all-cause mortality rates could be predicted to decrease by about 15%.50 Similar effects have been estimated for other countries including Canada51 and Nordic countries.52 A recent review both underscored the global importance of vitamin D and proposed changes to vitamin D nutritional policies.53 Thus, serum levels above 30—40 ng/mL may significantly reduce the risk of dental caries, but more research is required to determine the serum 25(OH)D level-caries risk relationship.

Casual solar UVB irradiance in summer can raise serum 25(OH)D levels by 10—15 ng/mL, on average, in those aged 45 years living in England.54 Higher increases are likely for young people living in the United States. Vitamin D production from solar UVB depends on many factors, including age, skin pigmentation, body mass index, surface area exposed, time of day and geographic location but the easiest way to raise serum 25(OH) D levels is through vitamin D3 supplementation. For most people, increases of 10—15 ng/mL would require intakes of 1,000— 2,000 IU/day.55 However, there is considerable person-to-person variability in serum 25(OH)D with respect to oral intake,56 so It is interesting that studies have found little difference in den-testing 25(OH)D levels is recommended for those wishing to tal caries rates between African American and white American achieve specific levels. children.57 Those of African descent have more calcium in their bones than white people.58 They are also likely to have more calcium in their teeth. These data may reflect genetic factors or, in immigrants, higher sun exposure in early life.

The finding of maximal dental health with UVB doses of about 6.5 kJ/m2, is interesting though it is also possible, though unlikely, that fluoride levels in drinking water are lower in the sunnier states, primarily in the southwest (See Fig. 2.).

Since the studies reviewed and the analyses presented are ecological studies and their are due to the usual limitations of such studies. One limitation here is lack of information on dietary factors such as sugar consumption rates, which are important risk factors for dental caries. This analysis assumed that dietary factors were the same for all regions. This assumption is more likely to be satisfied in a single-country study than in a multi-country study, but it still leads to some uncertainty. Another limitation is that the dental index developed by Dunning5 was not expressed as a quantitative measure of dental caries. Thus, the relation shown in Figure 1 does not translate directly into a dose-response relation. Another limitation is that summertime solar UVB doses were used as the index of vitamin D production whilst vitamin D production and serum 25(OH)D levels are important during the entire year. Wintertime deficiency of vitamin D lasts several months in the higher-latitude States59 but is much shorter in States at lower latitudes whilst skin pigmentation also plays a role in vitamin D production but could not be adjusted for.

Fluoridation of municipal drinking water is currently widespread in the United States. It was introduced in Grand Rapids, Michigan in 1945.60,61
Comparisons of dental caries in 1945 and 1949 in Grand Rapids, Muskegon (with low water fluoride content) and in Aurora, Illinois, with natural fluoridation (at 1.2 ppm) showed that by age 15 years, those in Aurora had one-third the number of dental caries as those in the two Michigan cities whilst for under 7 years old, the dental caries rates were nearly the same for Grand Rapids as for Aurora. Based on this experiment, fluoridation was widely adopted and spread to most states by the 1980s. However, that study was conducted in the Northeast, where solar UVB doses are much lower than in the Southwest. By the end of 1992, 10,567 public water systems serving 135 million persons in 8,573 US communities had instituted water fluoridation.62 While widely accepted as a primary reason for decreases in dental caries,63 there is reason to doubt this claim. For example, dental caries have continued to decline in two European regions after water fluoridation was discontinued.64,65 Dental caries are considered primarily due to consumption of refined sugar and a low frequency of tooth brushing in Europe.4 In addition, adverse effects of excessive water fluoridation can be severe, including 'moderate dental fluorosis, stage I skeletal fluorosis (arthritis with joint pain and stiffness), decreased thyroid function and detrimental effects on the brain, especially in conjunction with aluminum.'66,67 Many papers on the adverse health effects are published in the journal Fluoride (www.fluorideresearch.org). Furthermore, The US Environmental Protection Agency recently announced proposed rules to limit fluoride level in drinking water to 0.7 milligrams of fluoride per liter of water due to risk of fluorosis for higher levels.68

It is unfortunate that water fluoridation, rather than promotion of sunlight and vitamin D fortification of food and the use of supplements, was adopted as the public health approach to reducing dental caries in the United States and elsewhere, especially since better vitamin D status has many additional benefits.47,50 However, fluoridation of drinking water to 1 ppm entails an ~12.5% (95% CI, 7.0% — 21.5%) risk of dental fluorosis, a fluoride-induced mottling of the enamel.69 Thus topical application of fluoride, such as through the use of fluoridated toothpaste, seems to provide a useful alternative to drinking water fluoridation.70

UVB and Vitamin D might decrease dental caries better than fluoride – July 2011         Printer Friendly PDF this page! Follow this page for updates
This page is in the following categories (# of items in each category)