Background: Low 25-hydroxyvitamin D levels are a global health problem with northern countries such as Canada at particular risk. A number of sociodemographic factors have been reported to be associated with low vitamin D levels but prior studies have been limited by the ability of the researchers to gather this data directly from clinical trial participants. The purpose of this study was to use a novel methodology of inferring sociodemographic variables to evaluate the correlates of vitamin D levels in individuals dwelling in the City of Calgary, Alberta, Canada.

Methods: We utilized data on vitamin D test results from Calgary Laboratory Services between January 1 2010 and August 31 2011. In addition to vitamin D level, we recorded age, sex, and vitamin D testing month as individual-level variables. We inferred sociodemographic variables by associating results with census dissemination areas and using Census Canada data to determine immigration status, education, median household income and first nations status as clustered variables. Associations between vitamin D status and the individual- and dissemination area-specific variables were examined using the population-averaged regression model by a generalized estimating equations approach to account for the clustering in the data.

Conclusions: Vitamin D status was associated with a number of sociodemographic variables.
Knowledge of these variables may improve targeted education and public health initiatives. 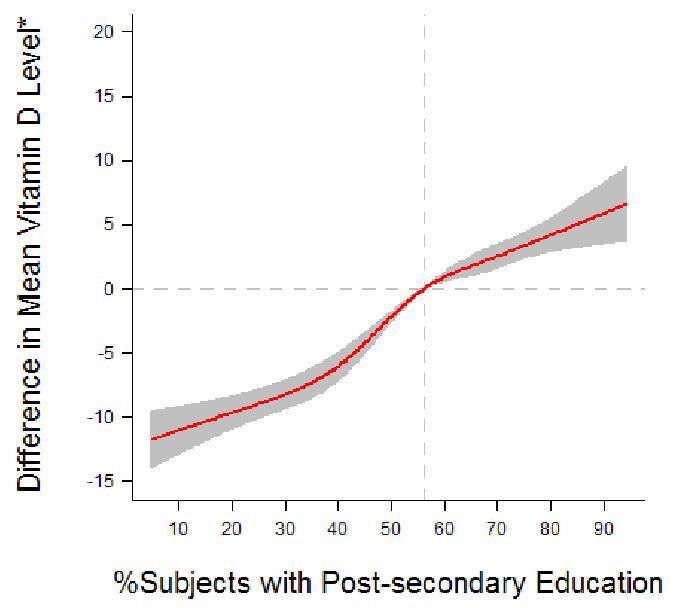 The more people born outside of Canada in the census track, the lower the vitamin D levels

Note: born outside of Canada = darker skin or concealing clothes 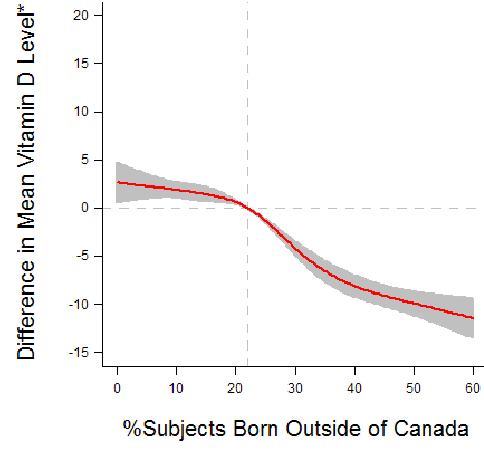 Lower vitamin D if born outside of Canada or lower education - April 2013         Printer Friendly PDF this page! Follow this page for updates
This page is in the following categories (# of items in each category)
Skin - Dark 451 Deficiency of Vitamin D 414 Vitamin D in Canada 49