Dietary and plasma magnesium and risk of coronary heart disease among women.

METHODS AND RESULTS: We prospectively examined the association between dietary and plasma magnesium and risk of CHD among women in the Nurses' Health Study. The association for magnesium intake was examined among 86 323 women free of disease in 1980. Information on magnesium intake and lifestyle factors was ascertained every 2 to 4 years through questionnaires.
Through 2008, 3614 cases of CHD (2511 nonfatal/1103 fatal) were documented.
For plasma magnesium, we conducted a nested case-control analysis, with 458 cases of incident CHD (400 nonfatal/58 fatal) matched to controls (1:1) on age, smoking, fasting status, and date of blood sampling.

CONCLUSIONS: Dietary and plasma magnesium were not associated with total CHD incidence in this population of women. Dietary magnesium intake was inversely associated with fatal CHD, which may be mediated in part by hypertension.

virtually all data points are within the dashed lines 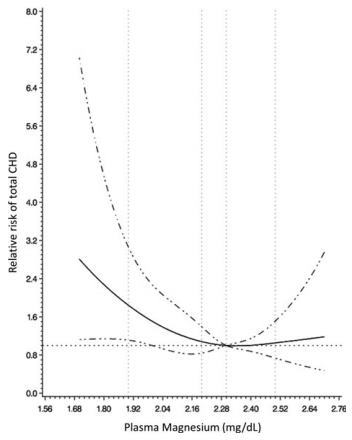 Magnesium and Vitamin D are synergistic, that is, increasing one helps the other.

Death from Coronary Heart Disease related to low Magnesium intake – March 2013         Printer Friendly PDF this page! Follow this page for updates
This page is in the following categories (# of items in each category)
Cardiovascular 439 Vitamin D and Magnesium 271