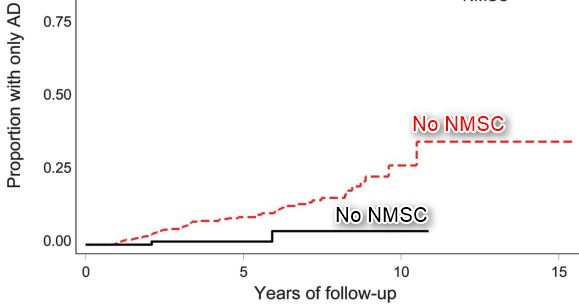 Objective: To explore the association of nonmelanoma skin cancer (NMSC) and Alzheimer disease
(AD) in the Einstein Aging Study, an epidemiologic study of aging in New York City.

Methods: Community-residing volunteers aged 70 years or older were assessed annually,
followed by multidisciplinary diagnostic consensus. Cancer status and type was obtained by
self-report. Cox proportional hazards models were used to test associations between NMSC
and subsequent risk of developing a neurocognitive disorder. To deduce a biologically specific
association between AD and NMSC, we considered 3 nested outcomes groups: only AD (probable
or possible AD as the sole diagnosis), any AD (probable AD or possible AD, as well as mixed AD/
vascular dementia), and all-cause dementia.

Results: We followed 1,102 adults with a mean age of 79 years at enrollment. Prevalent NMSC
was associated with reduced risk of only AD (hazard ratio = 0.21; 95% confidence interval =
0.051–0.87; p = 0.031) among subjects after adjustment for demographics, hypertension, diabetes,
and coronary heart disease. APOE e4 genotypes were available in 769 individuals. The
association was similar in magnitude, but nonsignificant, when the number of APOE e4 alleles was
included in the model. No significant association was found between NMSC and subsequent
development of any AD or all-cause dementia.

Conclusions: This population-based longitudinal study shows that individuals older than 70 years
with NMSC have a significantly reduced risk of developing AD compared with individuals without
NMSC. We deduce Alzheimer-specific neuroprotection, because the effect is attenuated or eliminated
when considering less-specific diagnoses such as AD with another diagnosis (any AD) or
all-cause dementia.

Alzheimer disease 5X less likely with nonmelanoma skin cancer (lots of vitamin D) – May 2013         Printer Friendly PDF this page! Follow this page for updates
This page is in the following categories (# of items in each category)
Cancer - Skin 113 Cognitive 324