Introduction: It has been suggested that vitamin D is effective to prevent mortality. However, there is no consistent conclusion that the effects of vitamin D supplementation on all-cause mortality are associated with duration of treatment. We conducted a meta-analysis regarding this issue in an effort to provide a more robust answer.

Methods: A comprehensive search in a number of databases, including MEDLINE, Embase and The Cochrane Central Register of Controlled Trials, was conducted for collecting randomized controlled trials (RCTs) on vitamin D supplementation preventing mortality. Two investigators independently screened the literature according to the inclusive and exclusive criteria and the relative data were extracted. Data analysis was performed by using Review Manager 5.0 software.

Results: Data from forty-two RCT s were included. Vitamin D therapy significantly decreased all-cause mortality with a duration of follow-up longer than 3 years with a RR (95% CI) of 0.94 (0.90–0.98). No benefit was seen in a shorter follow-up periods with a RR (95% CI) of 1.04 (0.97–1.12). Results remain robust after sensitivity analysis.
The following subgroups of long-term follow-up had significantly fewer deaths:

In addition, the combination of vitamin D and calcium significantly reduced mortality and vitamin D alone also had a trend to decrease mortality in a longer time follow up.

Conclusions: The data suggest that supplementation of vitamin D is effective in preventing overall mortality in a long-term treatment, whereas it is not significantly effective in a treatment duration shorter than 3 years. Future studies are needed to identify the efficacy of vitamin D on specific mortality, such as cancer and cardiovascular disease mortality in a long-term treatment duration. 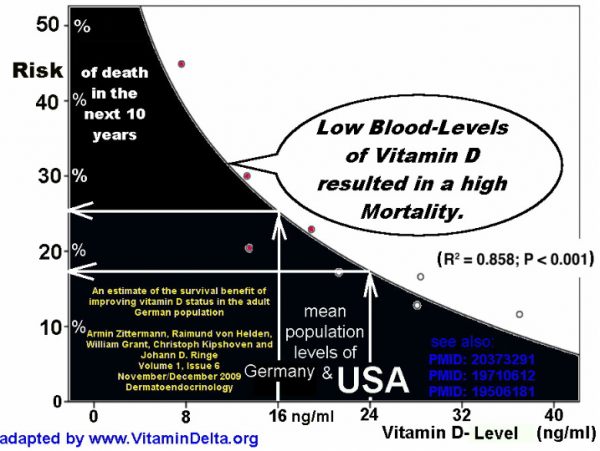