Medical News Today, 16 May 2011
Vitamin D supplements may help patients with chronic obstructive pulmonary disease (COPD) get more from their pulmonary rehabilitation programs, according to a study conducted by researchers from Belgium.

The study results will be presented at the ATS 2011 International Conference in Denver.

"Our study shows that high doses of vitamin D supplementation on top of a standard rehabilitation program improve the outcome in terms of exercise capacity and respiratory muscle strength," said Miek Hornikx, physiotherapist and doctoral student in the department of pneumology at the Katholieke Universiteit Leuven in Leuven, Belgium.

"COPD can be considered as a respiratory disease with important non-respiratory consequences, such as osteoporosis, cardiovascular disease and muscle weakness," she said. "These consequences eventually will be negatively influenced by physical inactivity which, along with exercise intolerance, is a common feature among patients with COPD and is proven to be related to mortality.

"Low levels of vitamin D in the blood have been related with muscle weakness, a major target for respiratory rehabilitation and increased risk of falls," she added "Since vitamin D is often depleted in patients with COPD, we wanted to see if vitamin D supplementation would have a beneficial effect on rehabilitation among these patients, perhaps by increasing muscle strength."

All patients participated in a pulmonary rehabilitation program for three months. At the beginning of the study and again at the completion of the rehabilitation program, peripheral and respiratory muscle strength, exercise capacity and vitamin D levels were measured. Patients were also asked to complete a quality of life survey both before and after rehabilitation.

At the end of the study, researchers found that patients treated with vitamin D had a significant improvement in exercise capacity and respiratory muscle strength compared to those in the placebo group.

Interestingly, despite significant improvements in exercise capacity in patients treated with vitamin D, those patients did not report a significant increase in health-related quality of life.

"This could be due to the fact that we had a relatively small number of patients included in this study, as well as to the relatively brief duration of the study," Ms. Hornikx said. Future studies should focus on the specific mechanisms by which vitamin D affects patients with COPD, she added.

MATERIAL AND METHODS: This study is a post-hoc subgroup analysis of a larger randomized trial comparing a monthly dose of 100.000 IU of vitamin D with placebo to reduce exacerbations. 50 Subjects who followed a rehabilitation program during the trial are included in this analysis. We report changes from baseline in muscle strength and exercise performance between both study arms after 3 months of rehabilitation. 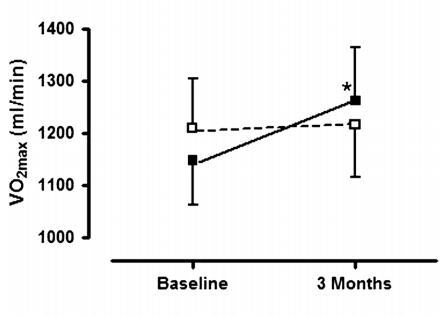 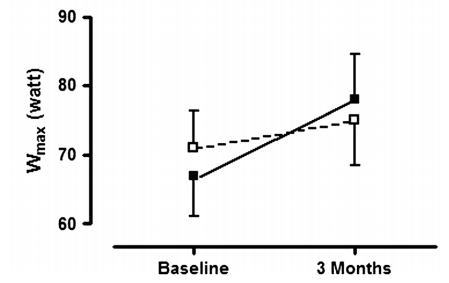 The present study is the first placebo controlled intervention study exploring the effect of supplementation with high doses of vitamin D in a 3 month rehabilitation program in patients with COPD. We found that, compared to training alone, patients receiving a monthly dose of 100.000 IU of vitamin D had a larger improvement on inspiratory muscle strength and peak exercise tolerance. There was a similar trend towards higher quadriceps strength, six minutes walking distance and dyspnea scores, but these effects did not reach statistical significance.

Although the reported effects are rather limited, the current data support the hypothesis that vitamin D supplementation may enhance training effects in disabled patients with muscle weakness and reduced exercise capacity. There are two reasons which may explain why a larger and general benefit could not be found. Most importantly, our data are post-hoc subgroup analyses of a larger randomized controlled trial and therefore not designed nor sufficiently powered to demonstrate clinically significant benefits. Secondly, our training program in the total study group yielded important effects on quality of life and symptoms,

but resulted in somewhat smaller effects than expected on physiological outcomes. As the latter outcomes would be preferentially affected by vitamin D because of common pathways in the muscle [8], the window for improvement under vitamin D was a priori small. The absence of clinically relevant training benefits in quadriceps strength and functional exercise capacity in the total subgroup may reflect the individual variability in training response, especially observed in very disabled COPD. Nevertheless, largest effects were preferentially obtained in the vitamin D supplemented group, whereas the placebo group seemed more resistant to physiological improvements.

Currently, it is still unclear which serum vitamin D levels are needed for an optimal muscle function [7,14,32]. Different intervention studies indicate that vitamin D supplementation may only improve muscle strength when baseline levels are deficient but surprisingly, few studies have explored this question in a context of training [33]. Bunout et al. reported that a daily intake of 400 IU of vitamin D with 800 mg of calcium plus biweekly strength, balance and aerobic exercises in an elderly population did not enhance muscle mass or function compared to either exercise or vitamin D alone [34]. A more recent randomized trial evaluated whether a daily consumption of fortified milk (800 IU of vitamin D and 1000 mg of calcium) enhanced the effects of resistance training in a community dwelling elderly population, but again no significant effect could be found [35]. Different authors therefore suggested that the supplementation dosage of vitamin D in these trials was probably insufficient to obtain potential benefits [14,33]. Our data support this idea as the high dose of vitamin D (corresponding to a daily intake of 3300 IU) increased median 25-OHD levels up-to 51 [44-62] ng/ml in the intervention arm with superior clinical effects compared to placebo. We also evaluated whether larger benefits were present in the subgroup of patients being vitamin D deficient at baseline. No significant relationship could be found but we should acknowledge that these subgroups were probably too small to appreciate any difference.

The effects of vitamin D on the skeletal muscle are either direct on contractility via blood calcium levels, but most are indirectly mediated through the vitamin D receptor (VDR) which is abundantly expressed in the skeletal muscle [36]. Vitamin D deficiency is shown to reduce actin and troponin content, to impair calcium uptake in the sarcoplasmatic reticulum, to down-regulate protein synthesis and to increase apoptosis [8,37], processes which are all described in skeletal muscles of patients with COPD [38-40]. Typically, severe vitamin D deficiency results in a type II fiber atrophy with interfibrillar spaces infiltrated with fat, fibrocytes and glycogen [35]. As skeletal muscles of patients with COPD are characterized by fiber type shifts towards a type II profile, vitamin D deficiency may have a superimposed deleterious effect [37,41]. Since patients with COPD are often vitamin D deficient and frequently suffer from skeletal muscle weakness, they compose an interesting target population for combined intervention studies with vitamin D supplements and training [42]. Currently, a randomized trial specifically designed to study these questions in COPD is ongoing (clinicaltrials.gov. NCT01416701). Our data generate aspiration that a significant and clinical benefit may be revealed.

Overall, the present post-hoc analysis supports the idea that in patients with COPD high dose supplementation with vitamin D can be beneficial when combined with exercise training. Our data should be confirmed by other studies sufficiently powered to evaluate clinical and sustained benefits in patients with COPD or specific subgroups. Only then recommendations on the appropriate use and dosage of vitamin D supplements in a clinical context of training can be made.

Note: You should not have large mono-therapies of anything, even vitamin D.
When taking more than about 3,000 IU of vitamin D you should balance your cofactors
Briefly this means:
Reduce total Calcium to 500 mg,
Increase your total Magnesium to 500 mg
Take Vitamin K2 - about 100 mcg
There are many suppliers which have all of the cofactors in a single product - capsule, liquid, and fizzy

Total cost for the vitamin D and cofactors is usually less than 20 cents per day.