The world epidemic of sleep disorders is linked to vitamin D deficiency.

An observation of sleep improvement with vitamin D supplementation led to a 2 year uncontrolled trial of vitamin D supplementation in 1500 patients with neurologic complaints who also had evidence of abnormal sleep.
Most patients had improvement in neurologic symptoms and sleep but only through maintaining a narrow range of 25(OH) vitamin D3 blood levels of 60-80ng/ml.
Comparisons of brain regions associated with sleep-wake regulation and vitamin D target neurons in the diencephalon and several brainstem nuclei suggest direct central effects of vitamin D on sleep. We propose the hypothesis that sleep disorders have become epidemic because of widespread vitamin D deficiency. The therapeutic effects together with the anatomic-functional correspondence warrant further investigation and consideration of vitamin D in the etiology and therapy of sleep disorders. 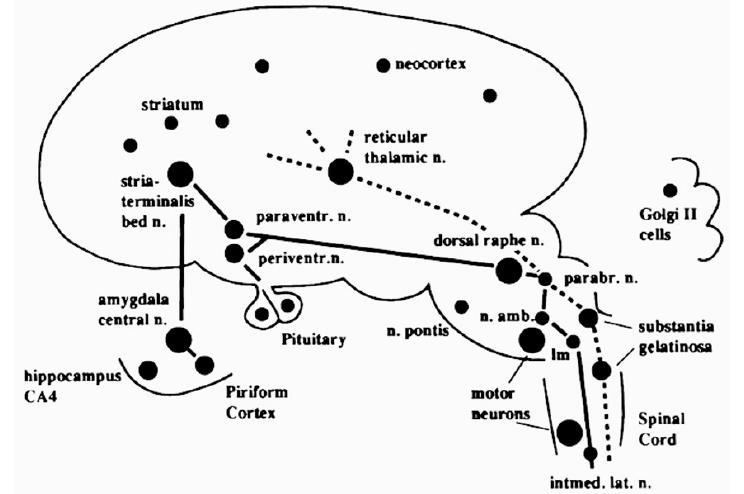 Major sites of nuclear concentration of 3H-1,25(OH)2 vitamin D3 in neurons of brain and spinal cord of rats and mice, indicating neuroendocrine-autonomic (solid
line), sensory (dotted line) systems, ventral motor areas, and dispersed cortical target neurons. Size of the black dots corresponds to intensity of nuclear uptake and retention
after injection of the radiolabeled hormone. Schematic prepared after results from autoradiograms (from Ref. [34]).

This past November 13th, Dr Walter E. Stumpf passed away, leaving a legacy of decades of ground-breaking work in medicine.
Walter, born in Oelsnitz, Germany, studied medicine at the Universities of Leipzig and Berlin (Dr med, 1952), served residencies at the Charité Hospital in
Berlin (1957) and the University of Marburg (1958-62) and then completed his Ph.D in Pharmacology at the University of Chicago (1967).
Starting in 1970, Dr Stumpf spent the next 25 years as Professor of Cell Biology and Pharmacology at the University of North Carolina, Chappell Hill, Medical
School, making substantial contributions in the fields of steroid hormones and tissue-specific localization of drugs; the latter of which he developed a pioneering
method for studying, a method he called “receptor microscopic autoradiography.”
This interest and development led to the discovery of novel target tissues of the hormone 1α25-dihdroxyvitamin-D, the active form of vitamin D. Prior to these
discoveries, it was unanimously believed that vitamin D was only involved in calciotropic actions. Today, thanks to the work of Professor Stumpf, we know that
active vitamin D is an important hormone for tissues all over the body. Indeed, without his ground-breaking work, research in vitamin D would still be in the dust.
We are indebted to Walter Stumpf, for his lifetime of innovation, bravery, and pursuit of wisdom.

Printer Friendly PDF this page! Follow this page for updates
This page is in the following categories (# of items in each category)
Sleep 65 Optimum 74
Edit Comments Files 2