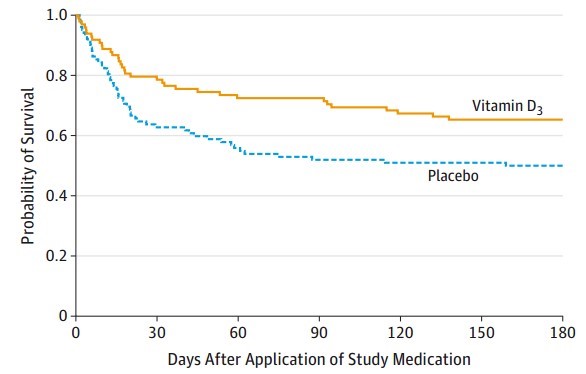 Trauma and surgery contains the following

Trauma and Surgery category has 265 articles 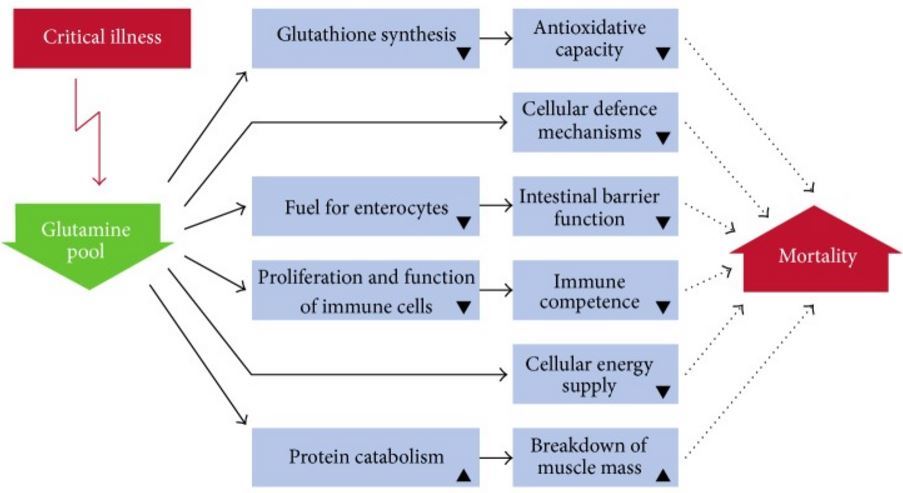 My wife: 73 years old - (she had been taking lots of Vitamin D and Omega-3 - which may be important)
Tripped and hit the back of her head on the concrete floor
Mild concussion - Felt uncertain/unease for 6 days
Took teaspoon of L-Glutamine 6 days later and felt better in a few hours
Took 2nd teaspoon of L-Glutamine later that day
After taking 3rd teaspoon - she felt completely back to normal
Dr. Matthews recommended that she continue with Glutamine for 2 weeks
As a result of chart above, my wife will take it more often than 2 times per day for the 2 weeks
Update Dec 2017
Several of her friends suffering from concussion have also benefited from L-Glutamine - even 2 years after the concussion

Background: It has been estimated that over 400,000 patients die each year from medical errors in the United States. The purpose of this study was to investigate the impact of vitamin D (a steroid hormone and immune modulator) and glutamine supplementation, evidence- based medicine, and close staff supervision on hospital mortality rate in trauma patients. We hypothesized that vitamin D and glutamine supplementation, evidence-based medicine, and close staff supervision has an appreciable or measureable effect in reducing the hospital mortality rate in critically injured patients admitted to surgical intensive care units and to surgical floors.

Study Design: We performed a retrospective study of 6,258 trauma patients listed in the trauma registry who were admitted to the Trauma Service at Grady Memorial Hospital, a Level I trauma center, between January 1, 2000 and December 31, 2011. The analysis compared two groups: standard care treatment group (Control Group)) versus the evidence-based medicine treatment group (Evidence -Based Medicine Group). Trauma patients admitted from 2000-2006 (Control Group, n=3,285) were treated with standard (usual) care. Trauma patients admitted from 2007-2011 (Evidence-Based Medicine Group, n=2,973) were managed with standard care plus vitamin D and glutamine supplementation, evidence - based medicine, and close staff supervision. The primary outcome was mortality rate of the Control Group versus the Evidence-Based Medicine Group.

Conclusion: Our study suggested that, implementation of evidence-based medicine methodology significantly reduces the mortality rate among the trauma patients treated in the Evidence-Based Medicine Group. Further studies are warranted.

In a 1999 report, “To Err Is Human & Building a Safer Health System” the Institute of Medicine (IOM) reported that medical errors are responsible for 98,000 of hospital deaths each year [1]. IOM estimated that medical errors cost the United States about $37.6 billion each year1. Thus, medical errors resulted in a significant loss of life, increased morbidity, and placed a high financial burden on medical centers throughout the United States.
In 2003, the ACGME limited residents’ work hours (80 hours per week) in an effort to reduce medical errors [2,3]. However, no study to date has shown any statistical difference in the reduction of preventable medical errors and mortality rates since resident duty hours went into effect [4]. Although sleep deprivation is a contributing factor, a lack of clinical knowledge and clinical judgement and vitamin D deficiency are the main culprits.
Vitamin D levels less than 18 ng/mL are associated with an increase of all-cause mortality rate of 30%. Vitamin D is a pleotropic steroid hormone that controls 3,000 out of xxxx human genes including the immune response and the inflammatory response systems. Vitamin D levels greater than 50 ng/mL upregulate the CD4 count (T-Cell). Thus, vitamin D deficiency can result in quantitative and qualitative CD4 (T-cell) deficiencies. T-cells need vitamin D for proper immune function. Glutamine works synergistically with vitamin D as the fuel for the immune response system.
The top three causes of medical malpractice lawsuits over the past 2 decades are as follows: 1) medication errors 2) missed diagnosis and 3) a delay in diagnosis [5]. These errors have been attributed to a lack of understanding of pharmacology (drug contraindications, dosages, side effects, and drug interactions) and basic pathophysiology, which are cognitive errors most likely secondary to gaps in clinical knowledge [6]. Consequently, any medical educational reform efforts to reduce medical errors should focus, in part, on strengthening these cognitive aspects of training (pharmacology, pathophysiology, and evidence-based medicine). IOM estimated that 1.5 million patients suffer from mistakes involving medications that are given each year [7].
“Assessing blame for medical errors” rather than addressing “system errors” as the root cause of preventable medical errors is the primary impediment to improving patient safety in many teaching hospitals. Hospital administrators must take a more active role in patient safety if we want to improve patient outcome. Using the “system errors” approach, we decreased our mortality rate by 46.3%.

A retrospective study of all trauma patients admitted to Morehouse School of Medicine Trauma Services from 20002008 was performed using information contained in the Trauma Registry from the Institutional Review Board. Approval was obtained from Morehouse School of Medicine.
Basic demographic data obtained included: age, gender, type of trauma (blunt or penetrating), injury severity score (ISS), and positive alcohol and drug screen levels, (Table 1). Trauma patients were characterized into two groups: standard group (2000-2006) and exposed group (2007-2008). The exposed group of trauma patients was treated using evidence-based medicine (Table 2), vitamin D and glutamine supplementation, on and close staff supervision. The top ten cause of medical, malpractice lawsuits were used to shape the focus, af our didactic teaching curriculum and monthly surgical exams.
The primary outcome compared was in- hospital mortality rate (Figure 1). Discharge to home or to a rehabilitation facility was considered a good outcome. Statistics were analyzed using Self- Propelled Semi-Submersible statistical software version (SPSS Inc. Chicago, Illinois), Fisher exact test, unpaired t-test was used to compare similarities and differences between the groups, and a P value of less than 0.05 was considered significant.

Demographic information was obtained from the Trauma Registry on 4,618 patients over a 9 year period (2000-2008). The patients were divided into 2 groups (standard -vs- exposed) for comparison according to mortality rates (Table 3). Mean age and sex distribution was similar among the two groups. Approximately one-third of the trauma patients in both groups had injury severity scores (ISS)>15. The percentage of penetrating -vs- blunt trauma was also similar in both groups.
The mortality rate for the standard group was 9.3% -vs- 5.0% for the exposed group, a 46.3% reduction in mortality rate (p-value <0.0001 and odds ratio of 1.94) (Figures 2,3). There was a significant difference between the two groups for overall survival. Our study suggests that a lack of evidence- based medicine, vitamin D and glutamine supplementation, and close staff supervision are independent risk factors for mortality.

Initiatives to reduce the number of preventable deaths from medical errors have received widespread awareness, both in medical literature and in the lay press. Five years after the IOM report, Leepe and Borwick published a grim account on the lack of progress that the medical community has made in enhancing patient safety [8,9]. The mortality rates from medical errors have not changed over the last ten years since the Institute of Medicine Report. Thus, our efforts to educate and train residents in error reduction has fallen short.

Despite this pessimistic view, a few reports of improvement have been published over the last several years. Our investigators demonstrated in this report that the majority of medical errors may be due to flaws in cognitive thinking and technical errors. Being proactive and taking ownership of patient safety results in significant reduction in medical errors and patient mortality rate [10]. By incorporating policies and addressing patient safety in medical care education, a hospital may decrease its mortality rate by 20 to 70%5. We conclude that this study shows that mortality rates and medical errors can be reduced appreciably using evidence-based medicine, didactic teaching and monthly surgical exams, and close staff supervision.

In our study, residents were given immediate, nonthreatening feedback from Morbidity and Mortality Conference, Morning Report, and the Trauma Outcome Registry Committee (TORC) about medical errors and preventable deaths [11,12]. Residents received monthly written exams on surgical diagnosis, treatment, pathophysiology and pharmacology. A teaching file on all medical errors was created to teach residents how to avoid the many pitfalls in medicine [13-16]. We were able to reduce our overall trauma mortality rate from 9.3% to 5%, a 46.3% reduction in mortality rate over a two year period using this multidimensional approach.

Despite the growing body of evidence that links most medical errors with flaws in cognitive thinking, graduate medical education programs continue to pay insufficient attention to the importance of pharmacology (medicine errors) and pathophysiology (missed diagnosis and delay in treatment). However, the real culprit may be the lack of cognitive medical knowledge and vitamin D deficiency.
The safety record of the health care system is a far cry from the enviable record of the similarly complex aviation industry [17-19]. The equivalent of 390 jumbo jets full of people die each year due to preventable medical errors, making this the 5th leading cause of death in the United States, states Dr. Samantha Collier, Vice President of Medical Affairs at Health Grades. The IOM says that the health care system is at least a decade behind the aviation industry in safeguarding consumer lives and health.

In a December 2002 the Kaiser Family Foundation survey, indicated only 5% of physicians identified medical errors as a top health care concern. We will not become safe until we choose to become safe. Despite technological advances, preventing medical errors will always depend on the vigilance of health care professionals.

Vitamin D deficiency has been shown to be associated with over 100 different chronic diseases [20-24]. Vitamin D is one of the strongest anti-inflammatory and antimicrobial agents known.

Printer Friendly PDF this page! Follow this page for updates
This page is in the following categories (# of items in each category)
Mortality and D 201 Trauma and surgery 265 Cost savings with Vitamin D 137 Intervention 613 Cognitive 282
Edit Comments Files 6