Context: Vitamin D is a potent secosteroid hormone that provides many skeletal and extraskeletal health benefits. Musculoskeletal injury prevention and recovery are potentially affected by sufficient circulating levels of the storage form of vitamin D: 25-hydroxyvitamin D3, or 25(OH)D. Vitamin D deficiency can exist among young, active, and healthy people, which may put them at increased risk for injury and prolonged recovery.

Evidence Aquisition: PubMed was searched using vitamin D and skeletal muscle, vitamin D and athletic performance, and vitamin D review articles. Studies from the 1930s to 2012 were used for the review.

Conclusions: Vitamin D deficiency is common in athletes. For athletes presenting with stress fractures, musculoskele-tal pain, and frequent illness, one should have a heightened awareness of the additional likely diagnosis of vitamin D deficiency. Correction of this deficiency is completed by standardized and supervised oral supplementation protocols producing significant musculoskeletal sports health benefits.

Vitamin D is a necessary nutrient that must be obtained from the diet when sufficient quantities cannot be synthesized. Vitamin D3 is primarily produced following incidental skin exposure to ultraviolet B irradiation, with very little derived from dietary sources (Figure 1).40 Cutaneous production can be absent or dramatically reduced due to skin coloration and sunblock use.2,40 Melanin in the skin of Africans or African Americans blocks nearly 99% of vitamin D production, with similar decreases in cutaneous synthesis achieved following application of SPF 15 sunblock.2,40 Indoor activities, pollution, time of day, increasing age, latitude, and seasonal changes all affect cutaneous vitamin D production.40 As mentioned, very little vitamin D is obtained from dietary sources, including D2 (ergocalciferol, plant) and D3 (cholecalciferol, human) forms. Of note, vitamin D3 is more potent than D2 and should be used for supplementation.3-68 Unfortunately, the average American diet supplies very little of the 4000 to 5000 IU of vitamin D3 used per day, even diets with significant amounts of wild-caught fatty fish.18,36,40,54 The accepted definition of vitamin D sufficiency is 25-hydroxyvitamin D3, (25(OH)D) above 30 ng/mL21-33-43-44 Based on this definition, vitamin D deficiency affects all age groups and demographics. Fifty to seventy percent of children and adolescents are vitamin D deficient.21,46 Over 75% of whites and 90% of African Americans and Latinos are vitamin D deficient, with increasing age increasing the likelihood of deficiency.10,27,76
In addition, deficiency rates have doubled from 1994 to 2004 with multiple factors responsible, including

Figure 1. Production of active vitamin D3. The storage form of vitamin D, calcidiol, or 25(OH)D (black box) is made following liver hydroxylation of vitamin D3 following dietary ingestion or skin synthesis from ultraviolet B exposure (peak skin production follows a 5- to 10-minute exposure of summertime sun between 10 am and 3 pm [produces about 10 000 IU of vitamin D3]). Active vitamin D produced either locally or through the kidney endocrine pathway has its biological effect by altering gene expression through a specific vitamin D response element.

There is no known threshold for optimal sports health benefits of vitamin D; however, peak neuromuscular performance is associated with 25(OH)D levels of 50 ng/mL (Figure 2), well above those considered sufficient.11,34,43 In athletics, the only demographic group that can normally achieve 25(OH) D levels in this range is lifeguards, following a full summer of sun exposure (average 64.4 ng/mL).14,29,43 At present, there is no comprehensive cross-athletic comparison of vitamin D levels; however, the incidence of vitamin D deficiency in elite indoor athletes is up to 94% of basketball players and 83% of gymnasts.52,74 One would assume that participation in outdoor sports provides an advantage for vitamin D production. However, recent reports including testing of New York Giants (football players) during spring practice showed that 81% were vitamin D deficient.64 In this National Football League study, 25(OH)D in white players averaged 30.3 ng/mL, and African Americans averaged 20.4 ng/mL.64 Additionally, a study of elite female soccer players showed that they had an average intake of vitamin D of 163 IU per day. However, results showed that average 25(OH)D levels in the same athletes were 30 ng/mL, possibly owing to the effects of sun exposure.26 Seasonal variations are expected, and current recommendations are for testing athletes in early autumn.24 One example of a seasonal difference in 25(OH)D was in female gymnasts and runners. Sixty-seven percent of participants had levels below 15 ng/mL in winter, with mean levels of 25 ng/mL in summer.50 A study out of Israel looking at athletes between 10 and 30 years old found that 73% had 25(OH)D levels < 30 ng/mL. This study also revealed a significant difference in vitamin D levels in indoor athletes compared with outdoor athletes, with 80% vs 48% being insufficient.19 At present, there is no study to evaluate the relationship of 25(OH)D level and athletic performance enhancement. 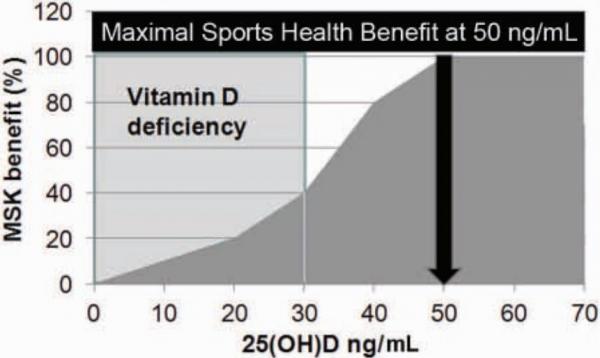 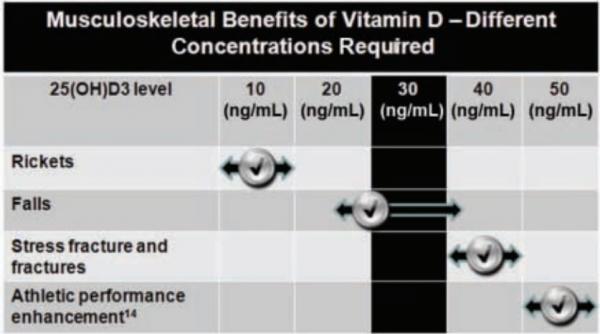 The concept of performance enhancement with ultraviolet irradiation is not new. It was previously used in Russian and German athletes in the 1930s and 1940s.14 Numerous effects have been reported with

following even a single dose of ultraviolet exposure.14,17,28,36,57,61,65 Application of this technology is difficult because of current opinion on appropriate sun exposure and skin coloration differences. African Americans require 10 times-longer ultraviolet B exposure to generate similar 25(OH)D levels compared with fair-skinned athletes.40 There is also evidence emerging showing the relationship of appropriate vitamin D levels and injury prevention and recovery.64 To highlight the previous football study, players with musculoskeletal injury had 25(OH)D levels substantially lower (average 19.9 ng/mL) than noninjured peers.64

Vitamin D is critical to many biological processes in the musculoskeletal system, with a strong correlation noted between vitamin D sufficiency and optimal muscle function.6,16,15,23,31,41 In vitamin D-deficient states, like rickets (Figure 3), generalized musculoskeletal pain is noted with profound myopathy, including muscle weakness, hypotonia, and resultant gait abnormalities.16,77 Physiologically, these deficient states produce muscle fiber atrophy, slow peak muscle contraction, prolonged time to muscle relaxation, and increased risk of chronic musculoskeletal pain.* It is important to note that type II, fast-twitch muscle fibers are particularly sensitive to the effects of vitamin D deficiency.58,77 Type II muscle fibers are extremely important in many of the burst activities necessary for peak athletic performance and fall avoidance.6 With vitamin D deficiency, atrophy of type II fibers is noted with fatty infiltration and fibrosis.58,77
Clinically, lower levels of 25(OH)D directly correlate with fatty degeneration of rotator cuff muscles on magnetic resonance imaging.56 It is not known whether vitamin D supplementation can reverse the process of rotator cuff muscle fatty degeneration, but supplementation can reverse the atrophy seen in type II fibers.77 Additionally, reversal of type II fiber atrophy is thought to be responsible for the 20% lower risk of falling with appropriate vitamin D supplementation.9,20 Supplementation with doses < 600 IU per day are ineffective in fall risk reduction, with the minimal level of 25(OH)D required for benefit being 24 ng/mL (Figure 3).9,20
Increasing vitamin D levels provides multiple musculoskeletal benefits.
Increases in

Benefits of supplementation are not limited to muscle alone. It is well known that vitamin D plays an important role in bone health and fracture prevention. In a meta-analysis of randomized controlled trials in older persons, higher dose vitamin D (700 800 IU per day) reduced the relative risk of hip fracture by 26% and nonvertebral fractures by 23% compared with calcium and placebo.13 Optimal fracture prevention occurred at 25(OH) D levels of 40 ng/mL, with identical levels important for stress fracture prevention (Figure 3).12,47,62,69 In a randomized control study evaluating vitamin D and calcium in female military recruits, the subjects received 2000 mg of calcium and 800 IU of vitamin D or placebo, and those receiving the supplements had a 20% reduction in fracture injury.47
Finally, recent studies have shown that vitamin D has immunomodulatory effects, with increased vitamin D levels reducing inflammation.74 Also, proinflammatory cytokines such as TNF-alpha and interleukin-6 are increased with lower levels of serum 25(OH)D, especially after intense periods of exercise.73 This period of increased inflammation has been theorized as one of the potential causes of "overtraining" or "overreaching" syndrome.49 Theoretically, if athletes increased their levels of vitamin D by supplementation, inflammation would be reduced, and training could be resumed more quickly.
Increased levels of vitamin D are correlated with numerous musculoskeletal and immune system benefits, including reductions in the reported incidence of colds and flu.49
•References 22, 31, 37, 42, 45, 58-60, 77. References 6, 8, 9, 45, 53, 63, 66, 70, 72.
(r = -0.40, P = 0.05) in division I collegiate athletes.30 Athletes, especially those injured or those with frequent infections, should have Vitamin D status in the spring was correlated with frequency of illness vitamin D levels measured and deficiencies corrected.30 Additionally, identification and treatment of vitamin D deficiency are important because of the expanding role of vitamin D in reducing the risk and impact of diabetes, multiple sclerosis, certain cancers, cardiovascular diseases and hypertension, cerebrovascular diseases, infectious diseases, asthma, depression, and other autoimmune and chronic inflammatory disorders.22,41

Vitamin D supplementation has already been widely accepted for musculoskeletal health benefits and disease prevention. 25(OH)D levels below 5 ng/mL are associated with a high prevalence of rickets.5,7 Initial milk supplementation programs began in the 1930s to prevent rickets, with an

There are no recommended screening guidelines for vitamin D deficiency. Vitamin D deficiency is diagnosed with a simple 25(OH)D blood test. There appears to be no clinical utility in measuring D2 and D3 levels separate from total 25(OH)D levels.12,21,33 Musculoskeletal benefits may be derived from diagnosis and correction of a deficient state. There is no apparent benefit from 25(OH)D levels above 50 ng/mL.11,34,43 Testing and supplementation protocols should be under the direct supervision of a health care professional, especially since there is variation in response.
If an athlete is vitamin D deficient, 25(OH)D < 30 ng/ mL, supplementation protocols require 50 000 IU of vitamin D3 per week for 8 weeks.40 A steady state level of 25(OH)D is achieved after about 90 days of supplementation.36 Once supplementation is completed, retesting is recommended at 3 months. If 25(OH)D remains below 30 ng/mL, repeating the supplementation protocol for another 8 weeks, and retesting is recommended.40 Once sufficiency is documented, continued supplementation as directed by the National Academy of Science should be used.55
National Academy of Sciences recommendation for upper intake levels of vitamin D and calcium
Figure 4. National Academy of Sciences upper limits. "Upper intake levels represent the upper safe boundary and should not be misunderstood as amounts people need or should strive to consume." Adapted from http:// www8.nationalacademies.org/onpinews/newsitem. aspx?RecordID=13050.
The National Academy of Science has commented on upper levels (4000 IU of vitamin D3 for adolescents and adults) of intake for vitamin D and calcium (Figure 4).55 With sufficient 25(OH)D levels, it is unnecessary to exceed intake 4000 to 5000 IU vitamin D3 per day.18,36,40,54 Sun exposure does have an advantage over vitamin D supplementation because cutaneous synthesis has a negative feedback loop preventing vitamin D accumulation and toxicity (Figure 1).2,39 Cutaneous synthesis is difficult to achieve with current opinion on appropriate sun exposure.2 Dietary supplementation therefore may be necessary. Extended oral dosing studies have been completed, and 10 000 IU per day is defined as the tolerable upper-intake level without toxicity reported.32,36,35 Even with a 5-month supplementation protocol of 10 000 IU per day, no adverse events were reported without toxicity at 25(OH)D levels below 200 ng/mL.32,35 Taking 10000 IU per day is not recommended with incremental increases in 25(OH)D by 70 ng/ml; well over the amount of 50ng/ml needed for optimal sports health benefits (Figure 2).36 Another alternative and easily accomplished approach to maintain long-term vitamin D sufficiency is by taking 50 000 IU of vitamin D once or twice a month.42

SORT: Strength of Recommendation Taxonomy  A = consistent, good-quality patient-oriented evidence
Athletes with vitamin D levels < 30 ng/mL should be given supplementation = A
Vitamin D3 (not D2) should be used for supplementation in deficient athletes = A

References in PDF attached at the bottom of this page

(Cached) Printer Friendly PDF this page! Follow this page for updates
This page is in the following categories (# of items in each category)
Sports and Vitamin D 230 Meta-analysis of Vitamin D 465 Optimum 74
Edit Comments Files 1