Background and Objectives: Recent studies have supported a role for both newer and more established vitamin D compounds in improving proteinuria, although systematic evaluation is lacking. Furthermore, concerns remain regarding the influence of vitamin D on the progression of renal function. We analyzed the efficacy and safety of vitamin D in non-dialysis patients and compared the use of newer versus established vitamin D compounds by performing a meta-analysis of randomized controlled trials.

Results: Eighteen studies were eligible for final inclusion; of these, six explored the effects of vitamin D on proteinuria, twelve studied the effects of supplementation on renal function, and fifteen discussed the incidence of hypercalcemia. Compared to the placebo or no interference, both the newer and established vitamin D sterols reduced proteinuria to a similar extent (RR, 2.00; 95% CI, 1.42 to 2.81). No decrease in the glomerular filter rate was observed (SMD, −0.10; 95%CI, −0.24 to 0.03), and the risk for dialysis initiation was 1.48 (95% CI, 0.54 to 4.03) with vitamin D treatment. Additionally, there was an increased risk of hypercalcemia for patients treated with either newer or established vitamin D compounds as compared with the controls (RR, 4.78; 95% CI, 2.20 to 10.37). The head-to-head studies showed no differences in the effects of either newer or established compounds on proteinuria or the risk of hypercalcemia. No serious adverse events were associated with the administration of vitamin D.

Conclusions: Vitamin D therapy appears to decrease proteinuria and have no negative influence on renal function in non-dialysis patients.
But the occurrence of hypercalcemia should be evaluated when vitamin D is provided.
No superiority for newer versus established vitamin D analogue is found. 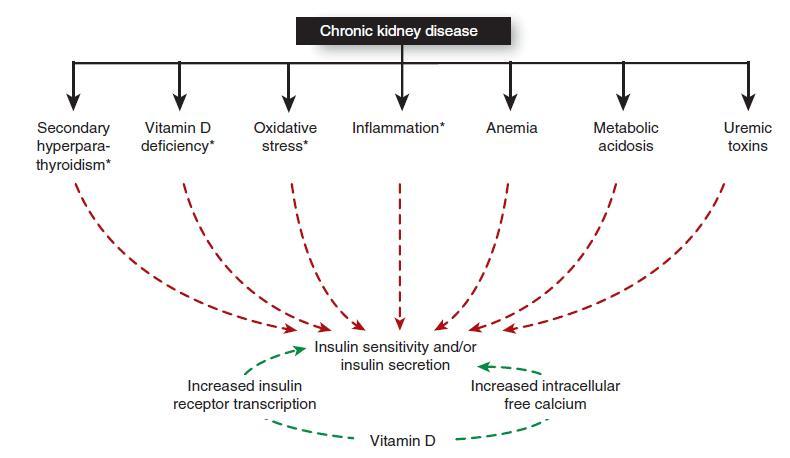