Bone matrix is predominantly made up of collagen, and in vitro and in animal models studies have shown that silicon is linked to glycosaminoglycans and plays an important role in the formation of cross-links between collagen and proteoglycans, determining the beneficial effects on strength, composition, and mechanical properties of bone. However, there are still no precise indications regarding a possible role of silicon on bone health in humans. Given this background, the aim of this narrative review was to consider the effectiveness of silicon dietary intake and silicon dietary supplementation (alone or with other micronutrients), in order to suggest a daily dosage of Si supplementation, on bone mineral density in humans. This review included eight eligible studies: four regarding dietary intake and four considering supplementation with silicon alone or with other nutrients. Despite the number of studies considered being low, the number of subjects studied is high (10012) and the results are interesting.
Although to date the available scientific evidences are not considered valid enough to allow to establish an adequate level of Silicon intake, based on extrapolations from the data obtained with studies on animal and human models, it has been suggested that an adequate intake in order to promote beneficial effects for bone could be considered to be around 25 mg silicon/day.
As for silicon dietary supplements, it has been shown that the combined treatment with orthosilicic acid (6 mg), calcium, and vitamin D has a potentially beneficial effect on femoral BMD compared to only use of calcium and vitamin D. 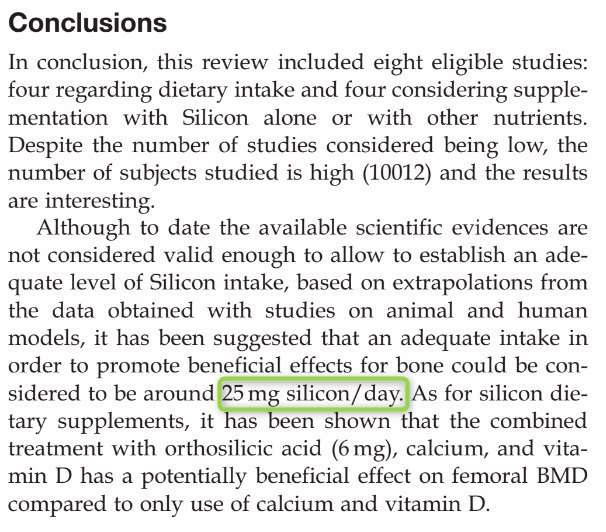 This study presents findings on the biological action of an integrated supplement containing the following components involved in osteogenesis and mineralization: vitamin D and silicon in the bioavailable and soluble form. A hypothesis that these components potentiate one another’s action and make calcium absorption by the body more efficient was tested. Biological tests of the effect of vitamin D and silicon chelates on bone fracture healing and bone turnover were conducted using ICR mice and albino Wistar rats. Radiographic and biochemical studies show that the supplement simultaneously containing silicon chelates and vitamin D stimulates bone tissue regeneration upon mechanical defects and accelerates differentiation of osteogenic cells, regeneration of spongy and compact bones, and restoration of bone structure due to activation of osteoblast performance. Bone structure restoration was accompanied by less damage to skeletal bones, apparently due to better absorption of calcium from food. The studied supplement has a similar effect when used to manage physiologically induced decalcification, thus holding potential for the treatment of osteomalacia during pregnancy or occupational diseases (e.g., for managing bone decalcification in astronauts).
&nbspDownload the PDF from VitaminDWiki

Note: Osteoporosis causes bones to become fragile and prone to fracture
Osteoarthritis is a disease where damage occurs to the joints at the end of the bones

VitaminDWiki pages with SILICON in title (4 as of May 2022)

Note: The founder of VitaminDWki has been adding Siicon n the form of extremely low cost hosetail for many year
Some Other Bones

Title change made May 2022 caused the visitor count to reset.
There have actually been 1912 visitors to this page since it was originally made

Silicon, Vitamin D and Bone Health - multiple studies         Printer Friendly Follow this page for updates
This page is in the following categories (# of items in each category)
Bone - Health 263 Supplement 70