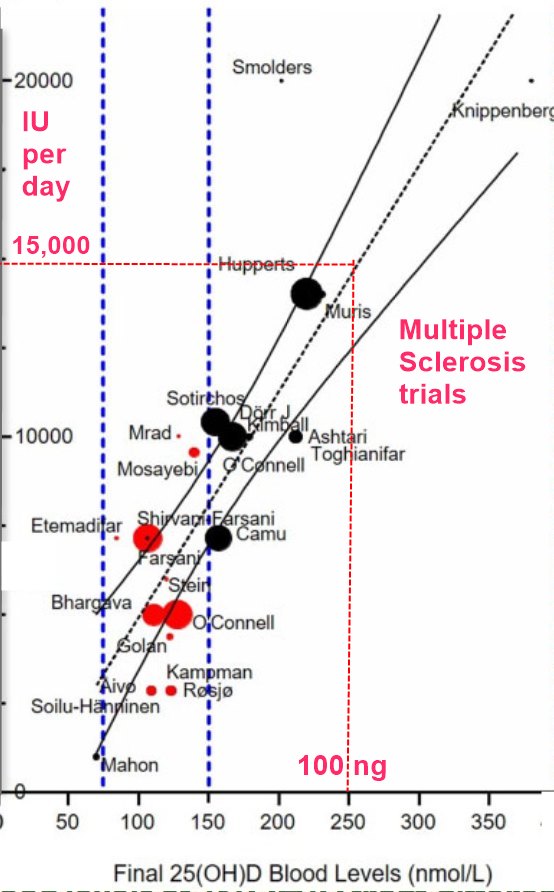 Vitamin D deficiency has been associated with the risk of multiple sclerosis, disease activity and progression. Results from in vitro experiments, animal models and analysis of human samples from randomized controlled trials provide comprehensive data illustrating the pleiotropic actions of Vitamin D on the immune system. They globally result in immunomodulation by decreasing differentiation of effector T and B cells while promoting regulatory subsets. Vitamin D also modulates innate immune cells such as macrophages, monocytes and dendritic cells, and acts at the level of the blood-brain barrier reducing immune cell trafficking. Vitamin D exerts additional activity within the central nervous system reducing microglial and astrocytic activation. The immunomodulatory role of Vitamin D detected in animal models of multiple sclerosis has suggested its potential therapeutic use for treating multiple sclerosis. In this review, we focus on recent published data describing the biological effects of Vitamin D in animal models of multiple sclerosis on immune cells, blood-brain barrier function, activation of glial cells and its potential neuroprotective effects. Based on the current knowledge, we also discuss optimization of therapeutic interventions with Vitamin D in patients with multiple sclerosis, as well as new technologies allowing in-depth analysis of immune cell regulations by vitamin D.

Despite all previous data about the potential immunological regulation and neuroprotective effects of VitD in multiple sclerosis models and multiple sclerosis patients, controversial results have been obtained from clinical trials evaluating VitD supplementation in multiple sclerosis patients. Kimball et al. evaluated tolerance and safety of escalating doses of active VitD ranging from 28 000 to 280 000 IU/week in an open-label study including 12 RRMS patients over a total of 28 weeks.172 Despite final mean serum concentrations of 25(OH)D of 386 ± 157 nmol/l, they did not observe any severe adverse events (SAEs) on this very small cohort. Since then, several SAEs (e.g. severe gastric symptoms, pseudobrain tumour and seizures, tonic-clonic seizures, severe hypercalcemia) were observed at extremely high doses (100 000 IU/day for 1-36 months), suggesting that excessive supplementation with VitD can be dangerous despite a plateau concentration close to 400 nmol/l and that treatment duration might play a role in VitD toxicity.268 Moreover, little is known about the immunological effects of very high levels of circulating VitD. In animal models, the higher VitD dose, the higher immunomodulatory effect is generally observed,
although excessive VitD treatment achieving serum levels over 250 nmol/L resulted in pro-inflammatory effects through lymphocyte activation and demyelination and myeloid infiltration into the brain, in addition to perturbations of phosphocalcic homeostasis.269

Since the original study by Mahon et al. in 2003, we identified more than 20 published case-control studies and double-blind RCTs aiming at evaluating the potential clinical and radiological benefits of VitD supplementation in multiple sclerosis patients.47,81-94,171,173,270-276 Some of these were recently reviewed and showed limited improvement in multiple sclerosis clinical and/or MRI features including fatigue, expanded disability status scale, relapses, T2-lesions, non-evidence of disease activity (NEDA-3) and in retinal nerve fibre layer thickness.21,277 These trials also evaluated safety of VitD supplementation at more physiological dosages (<15 000 IU/day) and did not observe a significant increase of AEs or SAEs in VitD-treated groups compared with placebo groups (CHOLINE,275 SOLAR171). Importantly, phosphocalcic homeostasis seemed respected at this level of supplementation, as no cases of calciuria and hypercalcemia were observed (SOLAR).

The safety range of VitD levels has been defined by an expert consensus in 2010 as of 30-100 ng/ml (equivalent to 75-250 nmol/l), considering that in healthy subjects who have spent prolonged periods in a sunny environment, measured 25(OH)D concentrations rarely exceed 100 ng/ml.278 In populations with light skin frequently exposed to the sunlight, the upper limit of circulating VitD levels is located between 75 and 150 nmol/l, providing an optimal range to reach after VitD supplementation, as defined by experts of bone and calcium homeostasis in order to prevent osteoporosis and fractures.279 However, so far, there are no recommendations for multiple sclerosis patients on potential VitD supplementation to achieve optimal levels for immune modulation and clinical effect.
In order to define VitD dosing to achieve optimal VitD therapeutic range after supplementation, we analysed 24 therapeutic trials accounting for 742 treated patients and providing their final VitD levels. When plotting the time of exposure with the daily dose of VitD supplementation of the treated group, we observed that protocols were very heterogeneous with treatment duration ranging from 2 to 24 months and dosages ranging from 1000 to 20 000 UI/day (Fig. 5A). However, we observed a strong correlation between the daily dose and the final circulating VitD levels of treated patients (Spearman r = 0.803, P < 0.0001, Fig. 5B), indicating that a daily dose of VitD between 3000 and 11 000 IU for 3-24 months achieves final blood VitD levels within the 75-150 nmol/l recommended range (red dots, Fig. 5A and

. Even at the higher doses used in the SOLAR study171 where patients received 14 000 Ul/day for 12 months, VitD levels above 200 nmol/l were obtained without occurrence of SAEs after 1 year. This potentially increases the safety of higher VitD supplementation reaching up to 250 nmol/l for short periods. However, the exact concentrations of VitD in multiple sclerosis needed to properly restore immune homeostasis over the long term remains to be determined as well as the optimal risk/benefit balance for VitD supplementation. Given the weak clinical and radiological effects of VitD treatment in short-term RCTs involving multiple sclerosis patients, further analysis of the in vivo immunological efficacy ofVitD are warranted to refine the objectives of chronic VitD supplementation in multiple sclerosis patients.
&nbspDownload the PDF from VitaminDWiki

>50,000 MSers successfully treated by ~90,000 IU daily in combination with other things