Relationship between vitamin D status and the vaginal microbiome during pregnancy 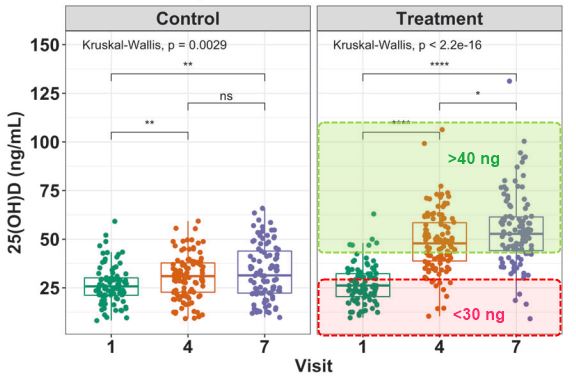 Note: it is not clear if the boxes should include the conrtols 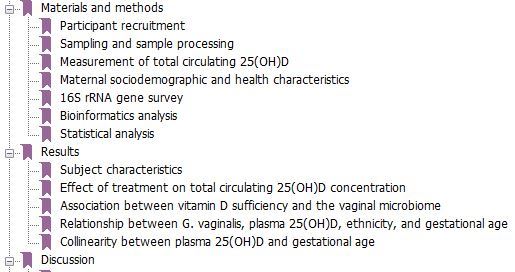 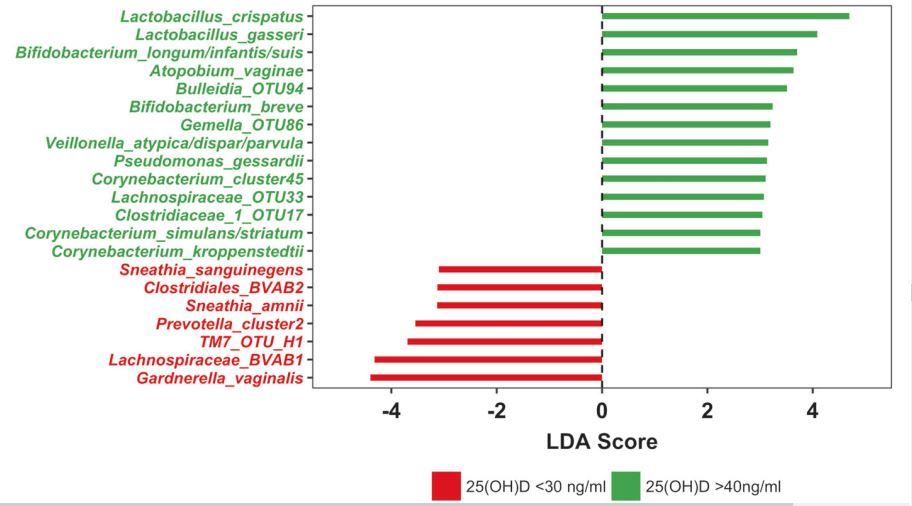 Result Gestational age and ethnicity were significantly associated with the microbiome. Megasphaera correlated negatively (p = 0.0187) with 25(OH)D among women of African ancestry. Among controls, women of European ancestry exhibited a positive correlation between plasma 25(OH)D and L. crispatus abundance.

The composition of the vaginal microflora can significantly impact both reproductive and neonatal health. Vaginal lactobacilli, through the production of lactic acid, create a vaginal environment characterized by a low pH, and this, in combination with bacteriocins and possibly other components, inhibits the colonization and growth of potentially pathogenic microorganisms and reduces the phylogenetic diversity of the vaginal microbiome. In a state of dysbiosis termed bacterial vaginosis (BV), the lactobacilli are depleted and replaced with a polymicrobial, anaerobic microflora that includes Gardnerella vaginalis, Atopobium vaginae, Sneathia, Prevotella spp, Megasphaera, and others. Although BV is frequently asymptomatic, this dysbiotic state is significantly associated with other clinical complications including pelvic inflammatory disease, infertility, and spontaneous abortion. When BV occurs during pregnancy, it is associated with a more than twofold increased risk for preterm birth. This is important because preterm birth accounts for as much as 70% of neonatal mortality, 75% of neonatal morbidity, and nearly 50% of long-term neurologic sequelae. A significant portion of moderate and late preterm births and the majority of very preterm births (<32 weeks) may be attributable to infection and subsequent inflammation and recent microbiome analyses reveal an association between term birth and abundance of healthy lactobacilli and an association between preterm birth and BV-associated bacterial taxa [1, 2].
Numerous studies support the important role for sufficient serum or plasma concentrations of 25-hydroxyvitamin D (25 (OH)D) during pregnancy in preventing negative outcomes [3-10]. Although some studies failed to detect an association, possibly because vitamin D deficiency is low among certain populations, many others and a recent meta-analysis suggest that vitamin D deficiency increases the rate of preterm birth, particularly early preterm birth [3]. It plays roles in maintenance of maternal and fetal calcium homeostasis, which is linked to skeletal integrity, in general fetal growth and development, and in the regulation of immune function [11, 12]. There also appears to be a relationship between vitamin D and BV status during pregnancy. Multiple reports describe higher rates of BV among women with insufficient 25(OH)D concentrations (often defined as <15 ng/mL or <37.5 nmol/L) [13-15]. However, studies in non-pregnant women have yielded conflicting results. One randomized controlled trial that investigated the effectiveness of vitamin D supplementation in conjunction with metronidazole in eliminating BV in non-pregnant women did not detect a positive effect of vitamin D [16] while another study found that vitamin D supplementation was effective in eliminating BV [17].
Race/ethnicity has significant population-level impacts on vitamin D status, BV status, and pregnancy outcomes. Vitamin D deficiency is more prevalent among people with limited sun exposure and among people with dark skin. Children of African ancestry are more likely than those of European ancestry to experience hypocalcemic seizures and to develop rickets [18]. Women of African ancestry are also twice as likely to receive a clinical diagnosis of BV, and analyses of the vaginal microbiota reveal that they are more likely to be colonized by certain BV-associated bacteria [19]. Furthermore, African American women (though not African-born women) are nearly twice as likely to give birth preterm (<37 weeks’ gestation) and more than twice as likely to give birth early preterm (<34 weeks) [20, 21] and vitamin D deficiency has been linked to preterm birth and small-for-gestational-age infants born to women of African ancestry [22, 23]. There is an urgent need to understand and address these important health disparities and an important first step in understanding whether or not the three parameters, vitamin D status, vaginal microbiome, and preterm birth, are linked. As a component of a prospective vitamin D supplementation trial in pregnant women funded by the W. F. F. Kellogg Foundation, referred to as the Kellogg Study, we analyzed a cohort of 230 healthy women and investigated the relationship between plasma 25(OH)D concentrations, the vaginal microbiome, and preterm birth.

Massive improvement in vaginal microbiome during pregnancy with Vitamin D – March 2019         Printer Friendly PDF this page! Follow this page for updates
This page is in the following categories (# of items in each category)
Pregnancy 813 Intervention 725