The Effects of Vitamin D Supplementation on Biomarkers of Inflammation and Oxidative Stress in Diabetic Patients: A Systematic Review and Meta-Analysis of Randomized Controlled Trials.

Vitamin D appears to both prevent and treat diabetes

Number of articles in both categories of Diabetes and:

Diabetes category starts with the following

Autoimmune category listing has 162 items along with related searches

Pages listed in BOTH of the categories Diabetes and Meta-analysis

Many studies have found that vitamin D treats diabetes, especially when it can get past poor guts

Pages listed in BOTH of the categories Diabetes and Intervention

PDF is available free at Sci-Hub

In this systematic review and meta-analysis of randomized controlled trials (RCTs), the effects of vitamin D supplementation on biomarkers of inflammation and oxidative stress in diabetic patients are summarized. The following databases were searched up to December 2017: MEDLINE, EMBASE, Web of Science, and Cochrane Central Register of Controlled Trials. The quality of the relevant extracted data was assessed according to the Cochrane risk of bias tool. Data were pooled using the inverse variance method and expressed as mean difference with 95% Confidence Intervals (95% CI). Heterogeneity between studies was assessed by the Cochran Q statistic and I-squared tests (I2).

Overall, 33 studies were included in the meta-analyses. Vitamin D supplementation were found to significantly reduce

in diabetic patients. In addition, vitamin D supplementation were found to increase

Overall, this meta-analysis shows that in diabetic patients, taking vitamin D had significant effects on hs-CRP and MDA levels, and significantly increased NO, TAC and GSH levels.
T2DM

NO increased in diabetics ( a good thing) 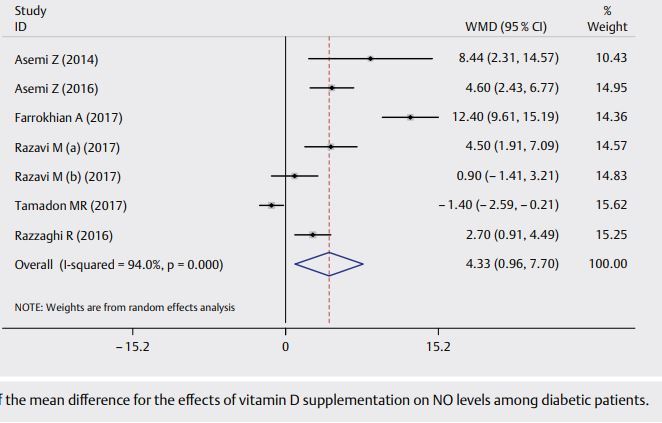 Printer Friendly PDF this page! Follow this page for updates
This page is in the following categories (# of items in each category)
Diabetes 447 Meta-analysis of Vitamin D 463 Top news 809
Edit Comments Files 2