Latitude continues to be significantly associated with the prevalence of multiple sclerosis: an updated meta-analysis. 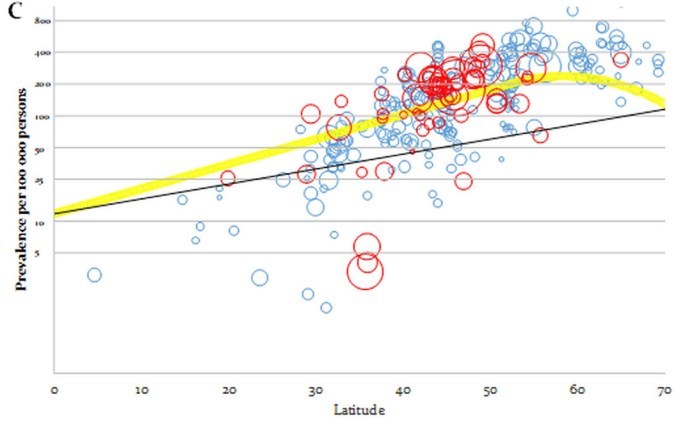 points in blue are the prevalence points from the original study,
while those in red are those from the present study.
size of bubbles is proportionate to the inverse of the sample variance. (Bigger = Better? = less variance)

Estimated change in prevalence per 100 000 persons per degree latitude
at 5-unit increments of latitude, estimated at 2018%%% (# is proportional to the slope of the curve, not the prevalence) 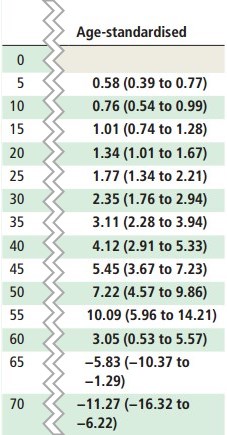 METHODS:
Studies published up to December 2018 were located via Embase, Web of Knowledge and PubMed, using standardised search terms; data were extracted from peer-reviewed studies and these studies added to those from our previous analysis. Where age-specific data were available, prevalence estimates were age-/sex-standardised to the 2009 European population. Prevalence estimates were adjusted for study prevalence year and ascertainment methods. The latitudinal association with MS prevalence was assessed by meta-regression.

RESULTS:
A total of 94 studies met inclusion criteria, yielding 230 new prevalence points and 880 altogether with those from the prior study. There was a significant positive gradient in time-corrected MS prevalence with increasing latitude (5.27/100 000 per degree latitude), attenuating slightly to 4.34/100 000 on age-standardisation, these associations persisting on adjustment for ascertainment method. Of note, the age-standardised gradient was consistently significantly enhanced from our previous study, regardless of whether it was as-measured, time-corrected or adjusted for ascertainment methods. Certain areas, such as the Scandinavian and Atlantic Coast/Central Europe regions, showed changes in MS prevalence gradient over time, but other regional gradients were similar.

Multiple Sclerosis incidence is still associated with latitude – Nov 2019         Printer Friendly PDF this page! Follow this page for updates
This page is in the following categories (# of items in each category)
Multiple Sclerosis 379 Vitamin D Far from equator 117