Two of the many charts in the PDF 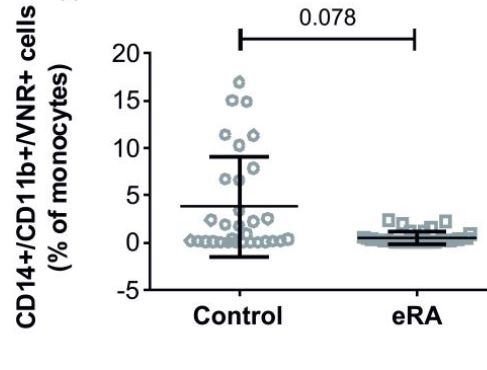 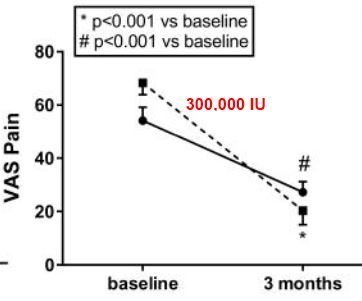 The aim of this study was to evaluate differences in T helper cell sub-types and osteoclast (OCs) precursors in peripheral blood between patients affected by early rheumatoid arthritis (eRA) and healthy controls. The effect of administration of cholecalcipherol on clinical and laboratory parameters was subsequently evaluated, by a parallel, randomized double blind, placebo controlled trial.
Thirty nine eRA patients and 31 age-matched controls were enrolled and compared for levels of 25OH vitamin D, T helper cell sub-types, OCs precursors including both classical and non-classical and pro-inflammatory cytokines at baseline. Eligible patients were female ≥18 years of age with a diagnosis of RA, as defined by the American College of Rheumatology 2010 criteria for <6 months prior to inclusion in the study. Patients with auto-immune or inflammatory diseases other than RA were excluded. Patients treated with glucocorticoids (GCs), disease modifying activity drugs and biologic agents within the past 6 months were also excluded. In the second phase of the study, eRA patients were randomly assigned to standard treatment with methotrexate (MTX) and GCs with (21) or without (18) cholecalcipherol (300,000 IU) and followed for 3 months; the randomization was done by computer generated tables to allocate treatments. Three patients didn't come back to the follow up visit for personal reasons. None of the patients experienced adverse events. The main outcome measures were T cells phenotypes, OCs precursors and inflammatory cytokines. Secondary outcome measure were clinical parameters. In eRA, 25OH vitamin D levels were significantly lower. CD4+/IFNγ+,CD4+/IL4+, CD4+/IL17A+ and CD4+IL17A+IFNγ+, cells were increased in eRA as well as non-classical OCs precursors, whereas T regulatory cells were not altered. TNFα, TGFβ1, RANKL, IL-23 and IL-6 were increased in eRA. Non-classical OCs, IL-23 and IL-6 correlated with disease severity and activity. Standard treatment with MTX and GC ameliorated clinical symptoms and reduced IL-23, whereas it did not affect CD4+ cells sub-sets nor OCs precursors.
After 3 months, the combined use of cholecalcipherol significantly ameliorated the effect of treatment on global health. In eRA, a significant imbalance in T CD4+ sub-types accompanied by increased levels of non-classical OCs precursors and pro-inflammatory cytokines was observed. A single dose of cholecalcipherol (300,000 IU) combined with standard treatment significantly ameliorates patients general health.

Early Rheumatoid Arthritis helped by 300,000 IU of vitamin D – RCT June 2017         Printer Friendly Follow this page for updates
This page is in the following categories (# of items in each category)
Rheumatoid Arthritis 95 Loading dose for Vitamin D 184