Background: Greater understanding of differences in baseline impairment and disease pro-gression in patients with Alzheimer's disease (AD) and Parkinson's disease dementia (PDD) may improve the interpretation of drug effects and the design of future studies.

Results: Patients with AD or PDD had similar levels of impairment on the ADAS-cog and NPI-10. Scores on the ADCS-ADL scale (standardized difference = 0.47) and the ADAS-cog memory domain (total, 0.33; items, 0.10-0.58) were higher in AD; PDD patients were more impaired in the language (0.23) and praxis (0.34) domains. AD patients receiving placebo showed greater deterioration on the ADAS-cog (0.14) and improvement on the NPI-10 (0.11) compared with patients with PDD.

Conclusión: Differing patterns of impairment occur in AD and PDD.

Alzheimer's disease (AD] is a chronic, neurodegenerative disorder, a principie manifes-tation of which is loss of cholinergic transmission in the central nervous system [1]. Clinically, AD presents as progressive impairment in cognition, behavior and the patient's ability to perform activities of daily living (ADL).
A number of clinical trials have demonstrated that treatment with a cholinesterase in-hibitor, such as rivastigmine, is associated with symptomatic improvements in cognition, behavior and the ability to perform ADL in patients with mild-to-moderate AD [2-4]. Rivastigmine is approved (in both oral and transdermal formulations] for the symptomatic treatment of mild-to-moderate AD in the USA and a number of other countries worldwide, and rivastigmine patch for severe AD in the USA.
Cholinergic system deficits are also pronounced in Parkinson's disease (PD) [5] and are believed to be associated with impaired cognitive function, leading to development of dementia in many patients with PD (Parkinson's disease dementia, PDD], especially as PD-related pathology begins to involve neocortical areas [6, 7]. Epidemiological studies have estimated that between 24 and 31% of patients with PD meet criteria for dementia [8]. Rivastigmine has demonstrated efficacy in mild-to-moderate PDD [9] and is approved for this indication in several countries, including the USA.
The Alzheimer's Disease Assessment Scale (ADAS) was developed to evaluate the severity and progression of both cognitive and non-cognitive dysfunction in patients with AD [10]. Validation of the cognitive subscale of the ADAS (ADAS-cog] has confirmed that the ADAS-cog can reliably assess increasing severity of dementia in patients with AD [11], and thus is now widely considered the gold standard measure of cognitive function in clinical drug trials of patients with mild-to-moderate AD. More recently, the use of the ADAS-cog in patients with PDD has also been validated [12]. The ADAS-cog assesses patients on 11 items, which evaluate three primary symptom domains: language, memory and praxis [13, 14].
Previous clinical studies of rivastigmine in AD and PDD provide a wealth of data pertaining to the use of rivastigmine in these patient populations [2-4, 9, 15, 16]. More specifically, these databases contain large amounts of baseline and post-baseline ADAS-cog data, including individual item and symptom domain scores. In addition to cognitive assessments, clinical trials of rivastigmine in AD and PDD have also assessed efficacy on a number of other scales, including the Alzheimer's Disease Cooperative Study-Activities of Daily Living (ADCS-ADL] scale [2, 9, 17], the 10-item Neuropsychiatric Inventory (NPI-10) [2, 9, 18] and the Alzheimer's Disease Cooperative Study-Clinical Global Impression of Change (ADCS-CGIC) [2-4, 9, 15, 16, 19]. Due to the large numbers of patients included in these databases, comparative analysis of the severity of baseline impairment on these measures across these trial populations may further elucidate disease-specific differences in patterns of impairment in these patients.
In a previous study, significantly different cognitive profiles were reported between care-fully matched subjects with PDD and AD (n = 488 in each group] [20]. These groups differed significantly on all measures, except for the ADAS-cog item naming objects/fingers. Based on standardized Z-scores, the groups were shown to differ most in the categories attention and calculation taken from the Mini-Mental State Examination (MMSE; serial 7s subtraction task], followed by the ADAS-cog items orientation, praxis and following commands [20].
The aim of this retrospective, post hoc analysis was to use available clinical data [2-4, 9, 15, 16] to investigate whether there are differences in the range of impairments observed at baseline and the rates of change in these domains over time in AD and PDD patients. Baseline scores on the total ADAS-cog, total ADCS-ADL, total NPI-10, the ADAS-cog's symptom domains (language, memory and praxis], and the 11 individual ADAS-cog items were compared between the AD and PDD patient populations. Besides investigating baseline impairment, calculating the change from baseline to the study endpoint in the placebo groups provided longitudinal data on disease progression over time in untreated patients with AD or PDD. Deterioration in cognition (ADAS-cog], behavior (NPI-10], ADL (ADCS-ADL) and global function (ADCS-CGIC] was compared between patients with AD or PDD randomized to receive placebo in these controlled clinical studies. Data were provided by a much larger set of AD patients than have been considered in previous analyses. 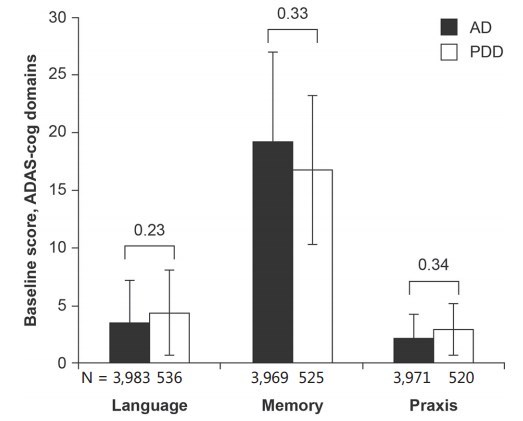 Fig. 1. Baseline scores on the ADAS-cog symptom domains of language, memory and praxis for the AD (IDEAL and ADENA) and PDD (EXPRESS) patient populations (randomized population). Values represent calculated stan-dardized differences comparing the AD and PDD patient popula-tions. Error bars represent the SD from the mean. Standardized dif-ferences were calculated using an ANCOVA model with study as a factor and corresponding base-line score as a covariate (where appropriate). Higher scores re-flect a greater impairment.

Comparison of Baseline ADAS-cog, ADCS-ADL and NPI-10 Data between the AD and PDD Patient Populations 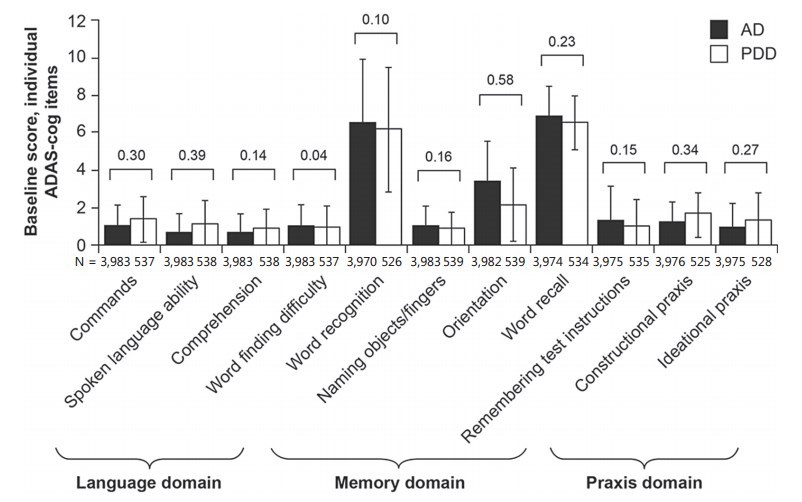 Fig. 2. Baseline scores on the individual ADAS-cog items that comprise the symptom domains of language, memory and praxis for the AD (IDEAL and ADENA) and PDD (EXPRESS) patient populations (randomized population). Values represent the calculated standardized differences comparing the AD and PDD patient populations. Error bars represent the SD from the mean. Standardized differences were calculated using an ANCOVA model with study as a factor and corresponding baseline score as a covariate (where appropriate). Higher scores reflect a greater impairment. 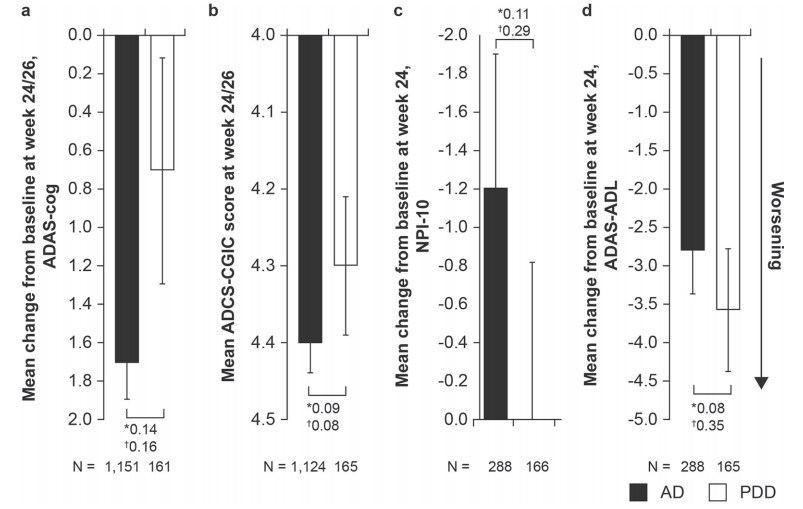 Despite cognitive deficits in both AD and PDD being related to cholinergic deficiency, mounting evidence suggests that these dementias are clinically and biologically distinct entities. PDD is commonly associated with a-synuclein (Lewy body) pathology, while AD is associated with neuritic plaques and neurofibrillary tangles in the basal forebrain [7, 24]. Although there is a clear overlap in the clinical presentation of both diseases, there are also distinct differences. PD is typically classified as a movement disorder; however, there are also non-motor features, including cognitive impairment [25]. Research has suggested that brain cholinergic deficiencies may be greater in PDD than in mild AD [26]. Patients with PDD predominantly show deficits in attention, executive function and visual spatial function [27, 28]. Memory impairment, which is dominant in AD, is less prominent in PDD [29]. The predominant language abnormality in PDD is impairment of verbal fluency, which is more marked in PDD compared with AD [7, 30]. Naming difficulties and impaired comprehension are also observed in PDD, although to a lesser extent than in patients with AD [7, 31]. Neuropsychiatric symptoms are common in both AD and PDD [28, 32]. Visual hallucinations, although present in both AD and PDD, tend to arise more commonly in PDD than in AD [33].
In the current analysis, we compared baseline impairment in patients with AD and PDD on a range of outcome measures, namely the ADAS-cog, ADCS-ADL and NPI-10. These data suggest that patients with AD demonstrate greater impairment in memory than patients with PDD, while patients with PDD tended to show greater impairment in language (except word-finding difficulty) and praxis. Overall, the greatest difference between patients with AD and PDD was observed on the orientation (memory) item. This observation is consistent with a previous analysis published by Bronnick et al. [20]. Given the impact of PD on motor function, the observed greater impairment of praxis in PDD compared with AD was not unexpected. Bronnick et al. [20] also reported greater impairment of praxis in patients with PDD. However, they also noted that this might be difficult to interpret given the impact of motor disability on a patient's ability to perform tasks, a point important to consider when interpreting the results of the current analysis.
Previous analyses have reported significant differences between patients with AD and PDD on the commands, constructional praxis, ideational praxis, word recall, word recognition and orientation items of the ADAS-cog, and the serial 7s subtraction task from the MMSE [20]. Based on the Z-scores, the groups differed most on attention and calculation (assessed using the MMSE), followed by orientation [20]. A direct logistic regression analysis showed that these variables reliably distinguished patients with AD and PDD with an overall success rate of 74.7% [20].
In these studies, patients with AD were found to score higher on the ADCS-ADL scale at baseline than patients with PDD, suggesting that patients with PDD are more impaired in their ability to perform ADL. This is not unexpected, as PD is a complex movement disorder, in which symptoms such as rigidity, bradykinesia and tremor can compound cognitive deficits to further restrict a patient's ability to perform tasks. Behavioral disturbances, as assessed using the NPI-10, appeared to manifest at similar levels in the two patient populations. However, stable doses of psychotropic medications were permitted at baseline in IDEAL and EXPRESS, and limited use of select medications in the ADENA program that may have masked behavioral disturbances in these patients.
Deterioration in global function, cognition, ADL and behavior was calculated for patients with AD and PDD randomized to receive placebo in these studies, allowing a comparison of disease progression over time in untreated AD and PDD patient populations. Overall, patients with AD showed greater deterioration in cognition (particularly memory) and fewer behav-ioral symptoms compared with patients with PDD, but similar levels of decline in ADL and global function were seen for both patient groups. This trend (for cognition and ADL) is consistent with previous studies of rivastigmine in these patient populations [28]. Further analyses taking into account the baseline MMSE score supported these findings, with the exception of the ADCS-ADL scale, where patients with PDD showed a greater mean change from baseline to the study endpoint than patients with AD. This suggests disease severity has a greater impact on deterioration of the ability to perform ADL in patients with PDD compared with AD. These data suggest that despite there being a common cholinergic basis to these diseases, they are distinctly different in aspects of their clinical features and progression.
Cognitive decline may be slower in PDD although this could be influenced by the range of cognitive domains assessed in these studies, since the ADAS-cog was originally developed to monitor progression in AD. As such, the scales employed may not fully quantify specific cognitive and functional impairments in the PDD patient population.
This was a retrospective, hypothesis-forming, exploratory analysis of baseline and follow-up data collected during the IDEAL study, ADENA program and EXPRESS. Data on AD and PDD patients were derived from three independent trial databases, which were not prospectively powered to detect differences in baseline characteristics or longitudinal differences between the patient populations. As a result, the data should be interpreted with caution. Larger studies enrolling both AD and PDD patients would be required to fully investígate and compare the range of impairments observed in these populations.
The findings of the current analyses demonstrate differing patterns of impairment between patients with AD and PDD, despite both illnesses involving cholinergic deficiencies. The results support previous suggestions that the dementia associated with PD is not simply AD comorbid to PD. Greater understanding of the clinical features and the progression of these disease states will be valuable in improving the accuracy of diagnosis and appropriate management of these conditions.

The development of the manuscript was supported by Novartis Pharmaceuticals Corporation, East Hanover, N.J., USA. Novartis have developed and manufacture rivastigmine and sponsored the large, multicenter, randomized, double-blind trials that led to the approval of rivastigmine for mild-to-moderate dementia of the Alzheimer's type and dementia associated with PD in the USA. Medical writing and editorial assistance in the preparation of this article were provided by Katy Cooke of Fishawack Communications Ltd, Oxford, UK.

Comparison of Alzheimer's Disease and Parkinson's Disease – Sept 2013         Printer Friendly PDF this page! Follow this page for updates
This page is in the following categories (# of items in each category)
Parkinson 93 Cognitive 324