Obesity is associated with vitamin D deficiency, and both are areas of active public health concern. We explored the causality and direction of the relationship between body mass index (BMI) and 25-hydroxyvitamin D [25(OH)D] using genetic markers as instrumental variables (IVs) in bi-directional Mendelian randomization (MR) analysis.

We used information from 21 adult cohorts (up to 42,024 participants) with 12 BMI-related SNPs (combined in an allelic score) to produce an instrument for BMI and four SNPs associated with 25(OH)D (combined in two allelic scores, separately for genes encoding its synthesis or metabolism) as an instrument for vitamin D. Regression estimates for the IVs (allele scores) were generated within-study and pooled by meta-analysis to generate summary effects.

On the basis of a bi-directional genetic approach that limits confounding, our study suggests that a higher BMI leads to lower 25(OH)D, while any effects of lower 25(OH)D increasing BMI are likely to be small. Population level interventions to reduce BMI are expected to decrease the prevalence of vitamin D deficiency. 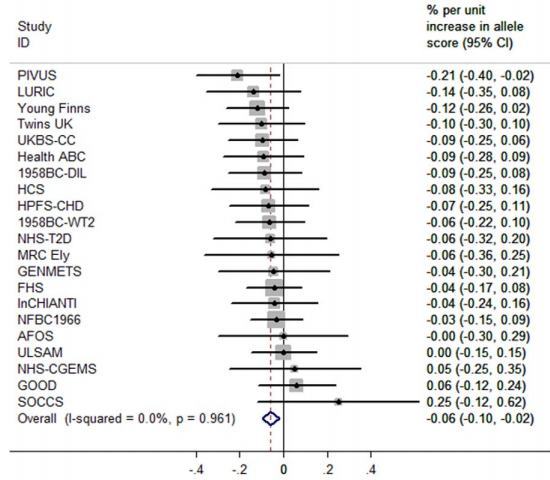 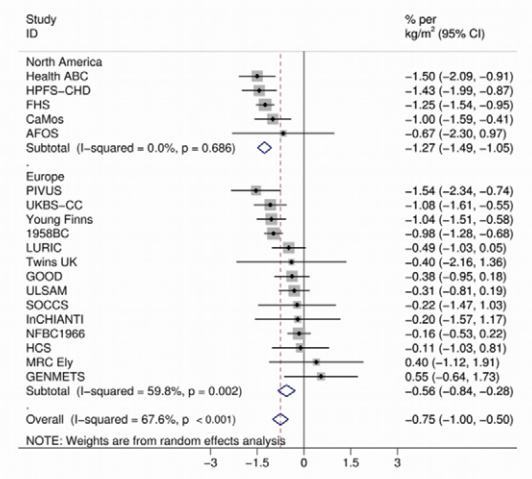 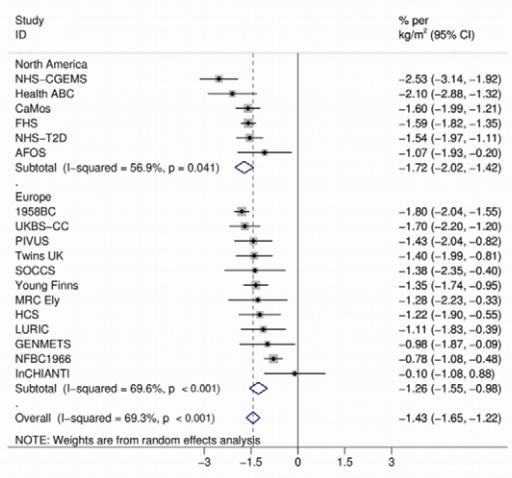 Obesity—having an unhealthy amount of body fat—is increasing worldwide. In the US, for example, a third of the adult population is now obese. Obesity is defined as having a body mass index (BMI, an indicator of body fat calculated by dividing a person's weight in kilograms by their height in meters squared) of more than 30.0 kg/m2. Although there is a genetic contribution to obesity, people generally become obese by consuming food and drink that contains more energy than they need for their daily activities. Thus, obesity can be prevented by having a healthy diet and exercising regularly. Compared to people with a healthy weight, obese individuals have an increased risk of developing diabetes, heart disease and stroke, and tend to die younger. They also have a higher risk of vitamin D deficiency, another increasingly common public health concern. Vitamin D, which is essential for healthy bones as well as other functions, is made in the skin after exposure to sunlight but can also be obtained through the diet and through supplements.

Observational studies cannot prove that obesity causes vitamin D deficiency because obese individuals may share other characteristics that reduce their circulating 25-hydroxy vitamin D [25(OH)D] levels (referred to as confounding). Moreover, observational studies cannot indicate whether the larger vitamin D storage capacity of obese individuals (vitamin D is stored in fatty tissues) lowers their 25(OH)D levels or whether 25(OH)D levels influence fat accumulation (reverse causation). If obesity causes vitamin D deficiency, monitoring and treating vitamin D deficiency might alleviate some of the adverse health effects of obesity. Conversely, if low vitamin D levels cause obesity, encouraging people to take vitamin D supplements might help to control the obesity epidemic. Here, the researchers use bi-directional “Mendelian randomization” to examine the direction and causality of the relationship between BMI and 25(OH)D. In Mendelian randomization, causality is inferred from associations between genetic variants that mimic the influence of a modifiable environmental exposure and the outcome of interest. Because gene variants do not change over time and are inherited randomly, they are not prone to confounding and are free from reverse causation. Thus, if a lower vitamin D status leads to obesity, genetic variants associated with lower 25(OH)D concentrations should be associated with higher BMI, and if obesity leads to a lower vitamin D status, then genetic variants associated with higher BMI should be associated with lower 25(OH)D concentrations.

The researchers created a “BMI allele score” based on 12 BMI-related gene variants and two “25(OH)D allele scores,” which are based on gene variants that affect either 25(OH)D synthesis or breakdown. Using information on up to 42,024 participants from 21 studies, the researchers showed that the BMI allele score was associated with both BMI and with 25(OH)D levels among the study participants. Based on this information, they calculated that each 10% increase in BMI will lead to a 4.2% decrease in 25(OH)D concentrations.

By contrast, although both 25(OH)D allele scores were strongly associated with 25(OH)D levels, neither score was associated with BMI. This lack of an association between 25(OH)D allele scores and obesity was confirmed using data from more than 100,000 individuals involved in 46 studies that has been collected by the GIANT (Genetic Investigation of Anthropometric Traits) consortium.

These findings suggest that population-level interventions to reduce obesity should lead to a reduction in the prevalence of vitamin D deficiency and highlight the importance of monitoring and treating vitamin D deficiency as a means of alleviating the adverse influences of obesity on health.