CYP2R1 is the principal hepatic 25-hydroxylase responsible for the hydroxylation of parent vitamin D to 25-hydroxyvitamin D 25(OH)D. Serum concentrations of 25(OH)D reflect vitamin D status, because 25(OH)D is the major circulating metabolite of vitamin D. The 1α-hydroxylation of 25(OH)D in the kidney by CYP27B1 generates the fully active vitamin D metabolite, 1,25-dihydroxyvitamin D (1,25(OH)2D). The human CYP2R1 gene, located at 11p15.2, has five exons, coding for an enzyme with 501 amino acids. In Cyp2r1-/- knockout mice, serum 25(OH)D levels were reduced by more than 50% compared wild-type mice. Genetic polymorphisms of CYP2R1 account for some of the individual variability of circulating 25(OH)D values in the population. We review the evidence that inactivating mutations in CYP2R1 can lead to a novel form of vitamin D-deficiency rickets resulting from impaired 25-hydroxylation of vitamin D.

We sequenced the promoter, exons and intron-exon flanking regions of the CYP2R1 gene in members of 12 Nigerian families with rickets in more than one family member. We found missense mutations (L99P and K242N) in affected members of 2 of 12 families. The L99P mutation had previously been reported as a homozygous defect in an unrelated child of Nigerian origin with rickets. In silico analyses predicted impaired CYP2R1 folding or reduced interaction with substrate vitamin D by L99P and K242N mutations, respectively. In vitro studies of the mutant CYP2R1 proteins in HEK293 cells confirmed normal expression levels but completely absent or markedly reduced 25-hydroxylase activity by the L99P and K242N mutations, respectively. Heterozygous subjects had more moderate biochemical and clinical features of vitamin D deficiency than homozygous subjects.

After an oral bolus dose of 50,000 IU of vitamin D2 or vitamin D3, heterozygous subjects had lower increases in serum 25(OH)D than control subjects, and homozygous subjects had minimal increases, supporting a semidominant inheritance of these mutations. No CYP2R1 mutations were found in 27 Nigerian children with sporadic rickets, a cohort of 50 unrelated Nigerian subjects, or in 628 unrelated subjects in the 1000 Genomes Project.

We conclude that mutations in CYP2R1 are responsible for an atypical form of vitamin D-deficiency rickets, which has been classified as vitamin D dependent rickets type 1B (VDDR1B, MIM 600081).

Many genes are NOT noticed by Vitamin D measurements 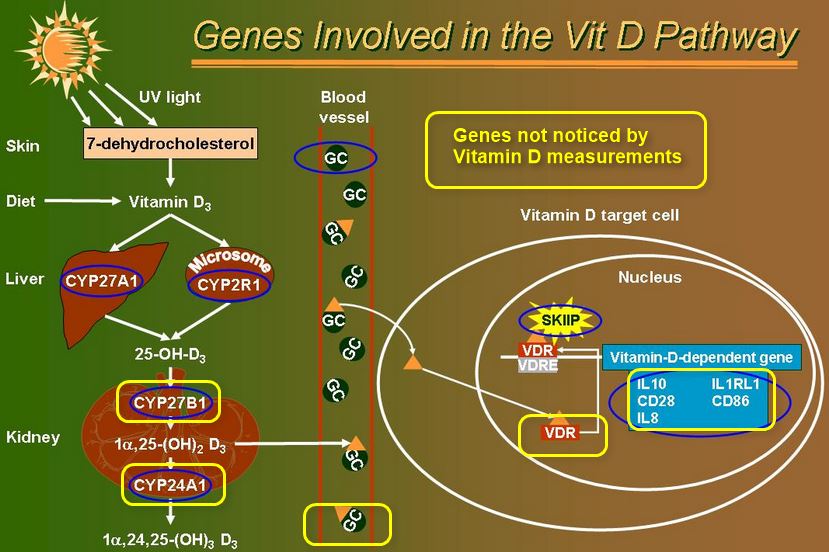