Hospitalisation for children with rickets in England: a historical perspective

We have analysed rates of hospital admissions for rickets in England, across five decades, in children younger than 15 years. We analysed data for all England using routinely collected hospital episode statistics for 1968—2011 (no national data for 1986—90). We also analysed data for the former Oxford NHS Region (population about 2·5 million) between 1963 and 2011 using the Oxford record linkage study (ORLS),3 which includes data for all day cases and inpatients. Data in the ORLS from 1963 and in England from 1999 were linked for each individual to distinguish episodes of care (individuals can have more than one episode of care, episode-based analyses) and individuals receiving care (irrespective of the number of episodes, individual-based analyses). Analyses were done by selecting records with International Classification of Diseases (ICD) codes for active rickets (ICD7 code 283, ICD8 265·0, ICD9 268·0, and ICD10 E55·0). Rates were directly standardised using 5-year age groups and the European standard population. 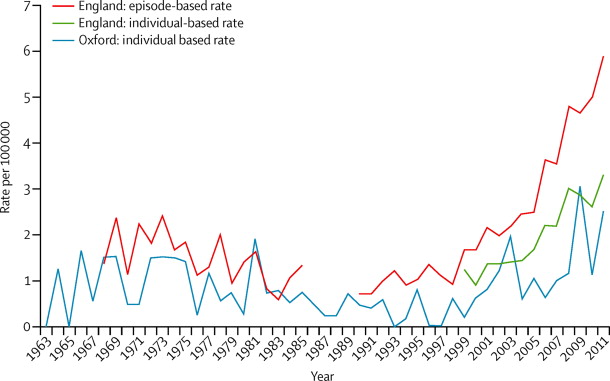 Rickets in children younger than 15 years: age-standardised rates per 100 000 younger than 15 years in England and in Oxford
Red: Episode-based rates (hospital discharges) for England, 1968–2011. Between 1968 and 1985, the data were a one in 10 sample of all NHS hospital discharges (excluding day cases), then termed the Hospital In-Patient Enquiry, and we scaled to 100% by multiplying each number of annual admissions for rickets by 10. There were no national data for 1986–90. Between 1990 and 2011, the Hospital Episode Statistics included day cases (patients admitted to hospital who did not stay overnight) and inpatients.
Green: individual-based rates for England, from 1999.
Blue: individual-based rates for Oxford, from the Oxford record linkage study.3

The increase in rates might be a reflection of increased incidence or severity of rickets, or changes in admission thresholds, diagnostic, or coding practices.
However, with other reports of a recent increase in rickets,2, 5 the previous hypothesis was that a rise in hospitalisation rates might occur.
The coding of rickets is straightforward, given the diagnosis; and the same exact term, active rickets, was used in the ICD in all decades studied.
Between 1968 and 1985, Hospital In-Patient Enquiry and ORLS were collected independently of each other; each shows the same profile suggesting face validity at least at that time.
Hospitalisation rates for rickets in England are now the highest in five decades.
Currently, rickets is not confined to non-white people, though it is more common in non-white than white individuals.
There is a case for a national confidential audit of rickets.

We declare that we have no conflicts of interest.

Rate of rickets is usually < 0.1% of births, unless dark skin or breastfed
Rate of rickets has greatly increased with the drop in vitamin D levels during the past 40 years
400 IU can prevent/treat most rickets Turkey gave vitamin D to EVERY child and eliminated Rickets
A low serum level of vitamin D does not indicate rickets
Sometimes rickets is also associated with a poor vitamin D receptor
Giving enough Vitamin D to the mother PREVENTS Rickets
Rate of rickets in some countries varies from 10% to 70% (typically poor health overall)
Rickets has been more than doubling in many countries
Rickets is strongly associated with severe breathing problems (weak ribs)
Bowed legs is not the primary indication of rickets (3 other indications of rickets are seen more often)
Vitamin D and Rickets consensus took 80 years

Rickets in England – huge recent increase – Feb 2014         Printer Friendly PDF this page! Follow this page for updates
This page is in the following categories (# of items in each category)