Introduction: Children and adolescents with a chronic illness have potential risk factors for vitamin D deficiency. An optimal vitamin D status might have multiple health effects. This study evaluated vitamin D status and its association with age, gender, and season in a large cohort of chronically ill Finnish patients at a tertiary pediatric outpatient clinic. A cross-sectional register-based study was carried out, involving altogether 1351 children (51% boys, age range 0.2–18 years), who visited the outpatient clinic during 2007–2010 and had their vitamin D status (S-25-OHD) determined. A post-doc analysis was conducted to identify predisposing and preventing factors for vitamin D deficiency.

Results: Almost half (47%) of the S-25-OHD values were consistent with subnormal vitamin D status (S-25-OHD <50 nmol/L) while only 12% were >80 nmol/L. Age and season were the most important determinants for S-25-OHD concentration. Mean S-25-OHD concentration differed between age groups (Kruskal-Wallis; p<0.001), adolescents being at highest risk for vitamin D insufficiency. Young age and vitamin D supplementation were preventive factors for deficiency, while non-Finnish ethnic background was a predisposing factor. S-25-OHD showed significant seasonal variation in children older than 6 years. In the whole cohort, S-25-OHD was on average 13 nmol/L higher in summer than in winter, and the prevalence of vitamin D deficiency ( = S-25-OHD <37.5 nmol/l) varied from 11% in summer to 29% in winter.

Conclusions:The finding that almost half of the studied Finnish children with a chronic illness had suboptimal vitamin D status is alarming. Inferior vitamin D status was noted in adolescents compared with younger children, suggesting that imbalance between intake and requirement evolves with age. Although less common during summer, subnormal vitamin D status was still observed in 28% of those evaluated in summer. Clinicians should identify individuals at risk and actively recommend vitamin D supplementation. 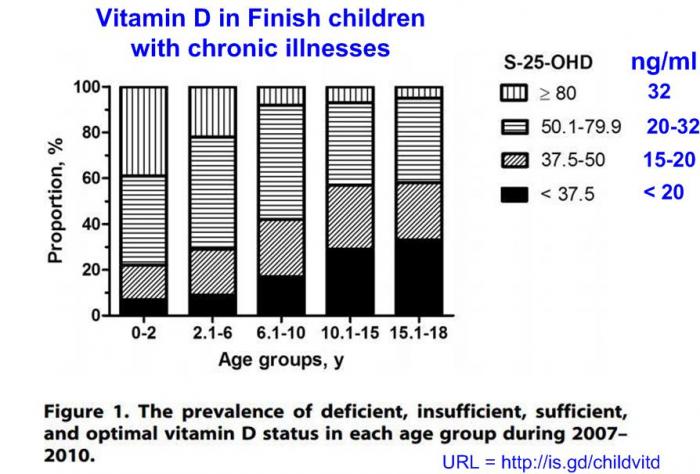 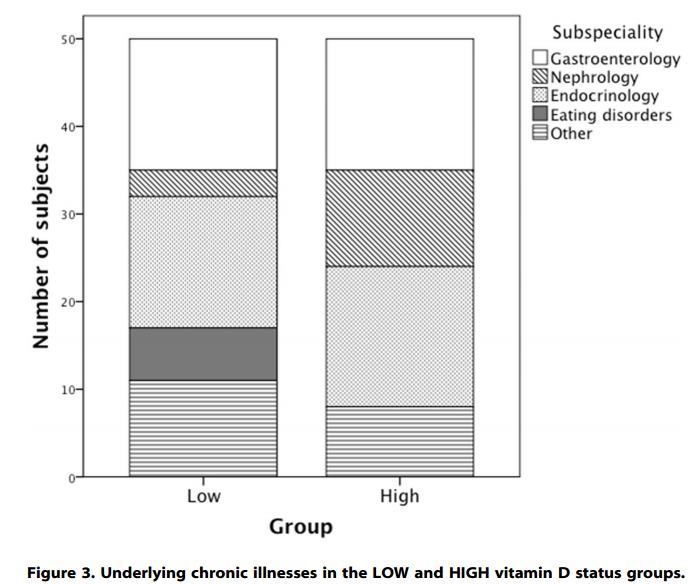 Half of children with chronic illness had low levels of vitamin D – April 2013         Printer Friendly PDF this page! Follow this page for updates
This page is in the following categories (# of items in each category)

3X more kids were vitamin D deficient when entering UK hospitals than 4 years...5 out of 6 children who died in pediatric critical care unit had low vitamin ...Hospitalization consumes vitamin D in children – March 2014Incidence of 22 health problems related to vitamin D have doubled in a decadeSymptoms of vitamin D deficiency vary with the age of the child – Feb 2013Vitamin D deficiency in adolescents, with 300,000 IU loading dose – Nov 2014Vitamin D statement by Society for Adolescent Health and Medicine – behind pa...VitaminDWiki News for April 2013