QUESTIONS UNDER STUDY:
To update the prevalence of vitamin D insufficiency and to identify factors associated with vitamin D status in the Swiss adult population.

METHODS:
Data from the 2010-2011 Swiss Study on Salt intake, a population-based study in the Swiss population, was used. Vitamin D concentration in serum was measured by liquid chromatography- tandem mass spectrometry. Major factors that influence vitamin D levels were taken into account. Survey statistical procedures were used to estimate means and prevalences of vitamin D levels and status. Monthly-specific tertiles of vitamin D and ordinal logistic regression were used to determine the associations of covariates of interest with vitamin D status.

RESULTS:
The prevalences of vitamin D insufficiency (serum 25-hydroxyvitamin D: 20-29.9 ng/ml) and deficiency (<20 ng/ml) were the highest in the January-March period; 26.4% (95%CI: 21.6-31.7) and 61.6% (95%CI: 56.0-67.0), respectively. In the same period, more than 9 of ten men were vitamin D insufficient or deficient. Each unit increase of Body Mass Index was associated with an 8% decreased likelihood of being in a higher vitamin D tertiles. Oral contraceptive, altitude, urinary excretion of calcium, use of vitamin D supplement or treatment, high wine consumption, physical activity were associated with vitamin D tertiles. Compared to the French-speaking region, the Italian-speaking region was independantly associated with a higher likelihood of being in higher vitamin D tertiles (OR: 1.66, 95%CI: 1.14-2.43).

CONCLUSIONS:
Low levels of vitamin D are common among Swiss adults, in particular during winter months and outside the Italian-speaking region. 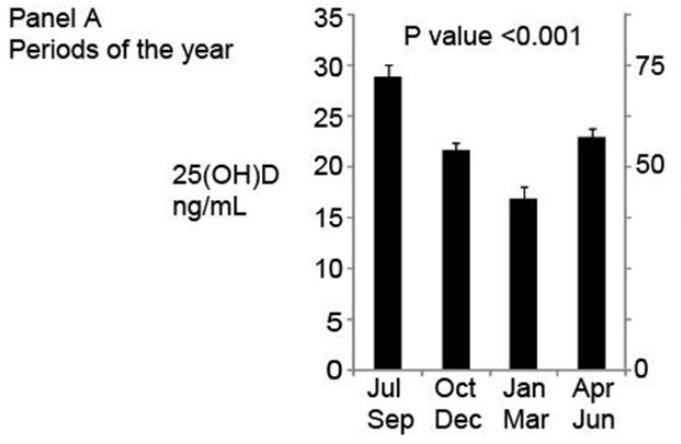 Vitramin D histogram for each language region - all weights

90 percent of Swiss men have less than 30 ng of vitamin D in the winter – Nov 2012         Printer Friendly PDF this page! Follow this page for updates
This page is in the following categories (# of items in each category)

1,000 IU of vitamin D from the sun not available in the winter (Switzerland t...Central Europe, like most of the world, has low vitamin D levels (under 30ng)...