Off topic: Can turn obesity on and off in mice with a gene – but not if obese for too long – Oct 2012

Obesity is a chronic metabolic disorder affecting half a billion people worldwide. Major difficulties in managing obesity are the cessation of continued weight loss in patients after an initial period of responsiveness and rebound to pretreatment weight. It is conceivable that chronic weight gain unrelated to physiological needs induces an allostatic regulatory state that defends a supranormal adipose mass despite its maladaptive consequences.

To challenge this hypothesis, we generated a reversible genetic mouse model of early-onset hyperphagia and severe obesity by selectively blocking the expression of the proopiomelanocortin gene (Pomc) in hypothalamic neurons. Eutopic reactivation of central POMC transmission at different stages of overweight progression normalized or greatly reduced food intake in these obesity-programmed mice. Hypothalamic Pomc rescue also attenuated comorbidities such as hyperglycemia, hyperinsulinemia, and hepatic steatosis and normalized locomotor activity. However, effectiveness of treatment to normalize body weight and adiposity declined progressively as the level of obesity at the time of Pomc induction increased. Thus, our study using a novel reversible monogenic obesity model reveals the critical importance of early intervention for the prevention of subsequent allostatic overload that auto-perpetuates obesity.
PMID: 23093774 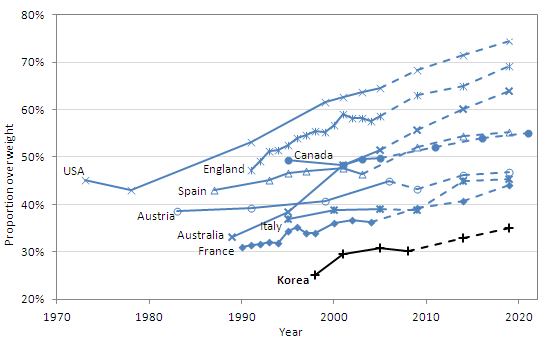 Off topic: Can turn obesity on and off in mice with a gene – but not if obese for too long – Oct 2012         (Cached) Printer Friendly PDF this page! Follow this page for updates
This page is in the following categories (# of items in each category)