Observation: People get a sunburn when getting lots of sun after months of little sun.
Question: Would they not get a sunburn if they first stocked up on vitamin D?

The ultraviolet (UV)-B spectrum in solar UV radiation is essential for stimulating the epidermal production of vitamin D but also damages DNA and causes cancer in exposed cells. We examined the role of solar UV in inducing DNA damage in blood lymphocytes and the possible modulation of this damage by serum 25-hydroxy vitamin D (25(OH)D) in 207 male and female participants from South Australia. Personal solar UV exposure was estimated from hours of outdoor exposure recalled at the time of blood collection for analysis of DNA damage in lymphocytes, using the cytokinesis-block micronucleus cytome (CBMN-cyt) assay and of serum 25(OH)D.

We examined the association between solar UV exposure, serum 25(OH)D and DNA damage using multiple linear regression, with age, sex, body mass index and alcohol consumption as covariates.
The frequency of cells with micronuclei (a biomarker of chromosome breakage or loss) increased with increasing sun exposure [% increase = 5.24; 95% confidence interval (CI): 0.35 to 10.37 P-value = 0.04]
but cells with nucleoplasmic bridges (a biomarker of misrepair of DNA strand breaks or telomere end fusions) decreased (% increase = -8.38; 95% CI: -14.32 to -2.03 P-value = 0.01).
There was also a fall in the nuclear division index (NDI) (% increase = -1.01; 95% CI: -2.00 to 0.00 P-value = 0.05), suggesting diminished mitogenic response and, possibly, immune suppression.
There was no overall relationship between 25(OH)D and DNA damage.
There were, however, weak modulating effects of 25(OH)D on the associations of solar UV exposure with micronucleus formation and with NDI (P-interaction = 0.03 and 0.05, respectively), where the increase in micronuclei and fall in NDI with increasing solar UV were greater at serum 25(OH)D levels <50 nmol/l.

Thus, the influence of solar UV exposure in causing DNA damage or immune suppression in internal tissues may be stronger when vitamin D levels are low.
PMID: 22547344

1?,25 Dihydroxyvitamin D(3) enhances cellular defences against UV-induced oxidative and other forms of DNA damage in skin.

DNA damage induced by ultraviolet radiation is the key initiator for skin carcinogenesis since mutations may arise from the photoproducts and it also contributes to photoimmune suppression. The active vitamin D hormone, 1?,25 dihydroxyvitamin D(3) (1,25(OH)(2)D(3)) reduces thymine dimers, the major photoproduct found in human skin after UV exposure, and suppresses the accumulation of nitric oxide derivatives that lead to more toxic reactive nitrogen species (RNS). We examined whether other forms of DNA damage are reduced by 1,25(OH)(2)D(3), and hypothesized that photoprotection by 1,25(OH)(2)D(3) is, in part, due to the suppression of various forms of promutagenic DNA damage, including thymine dimers, through a reduction of genotoxic RNS. Different forms of UV-induced DNA damage were investigated in irradiated skin cells treated with or without 1,25(OH)(2)D(3), or inhibitors of metabolism and inducible nitric oxide synthase. Keratinocytes were also treated with nitric oxide donors in the absence of UV light. DNA damage was assessed by comet assay incorporating site specific DNA repair endonucleases, and by immunohistochemistry using antibodies to thymine dimers or 8 - oxo-7,8-dihydro-2'-deoxyguanosine, and quantified by image analysis. Strand breaks in T4 endonuclease V, endonuclease IV and human 8 - oxoguanine DNA glycosylase digests increased more than 2-fold in UV irradiated human keratinocytes, and were reduced by 1,25(OH)(2)D(3) treatment after UV exposure, and m azide and an inhibitor of inducible nitric oxide synthase. Conversely, nitric oxide donors induced all three types of DNA damage in the absence of UV.

We present data to show that 1,25(OH)(2)D(3) protects skin cells from at least three forms of UV-induced DNA damage, and provide further evidence to support the proposal that a reduction in RNS by 1,25(OH)(2)D(3) is a likely mechanism for its photoprotective effect against oxidative and nitrative DNA damage, as well as cyclobutane pyrimidine dimers.

Non-melanoma skin cancers (NMSC) are the most common type of cancer, occurring at a rate of over 1 million per year in the United States. Although their metastatic potential is generally low, they can and do metastasize, especially in the immune compromised host, and their surgical treatment is often quite disfiguring. Ultraviolet radiation (UVR) as occurs with sunlight exposure is generally regarded as causal for these malignancies, but UVR is also required for vitamin D synthesis in the skin. Based on our own data and that reported in the literature, we hypothesize that the vitamin D produced in the skin serves to suppress UVR epidermal tumor formation. In this review we will first discuss the evidence supporting the conclusion that the vitamin D receptor (VDR), with or without its ligand 1,25-dihydroxyvitamin D, limits the propensity for cancer formation following UVR.
We will then explore three potential mechanisms for this protection:

Vitamin D production requires UVB. In turn, we have shown that vitamin D compounds reduce UV- induced damage, including inflammation, sunburn, thymine dimers, the most frequent type of cyclobutane pyrimidine dimer, immunosuppression, and photocarcinogenesis. Our previous studies have shown most of the photoprotective effects by 1α,25-dihydroxyvitamin D(3) (1,25(OH)(2)D(3)) occurred through the nongenomic pathway because similar protection was seen with an analog, 1α,25-dihydroxylumistrol(3) (JN), which has little ability to alter gene expression and also because a nongenomic antagonist of 1,25(OH)(2)D(3) abolished protection. In the current study, we tested whether this photoprotective effect would extend to other types of DNA damage, and whether this could be demonstrated in human ex vivo skin, as this model would be suited to pre-clinical testing of topical formulations for photoprotection. In particular, using skin explants, we examined a time course for thymine dimers (TD), the most abundant DNA photolesion, as well as 8 - oxo-7,8-dihydro-2'-deoxyguanosine ( 8 - oxodG), which is a mutagenic DNA base lesion arising from UV-induced oxidative stress, and 8 - nitroguanosine ( 8-NG). Nitric oxide products, known markers for chronic inflammation and carcinogenesis, are also induced by UV.

This study showed that 1,25(OH)(2)D(3) significantly reduced TD and 8-NG as early as 30 minutes post UV, and 8 - oxodG at 3 hours post UV, confirming the photoprotective effect of 1,25(OH)(2)D(3) against DNA photoproducts in human skin explants.

At least in part, the mechanism of photoprotection by 1,25(OH)(2)D(3) is likely to be through the reduction of reactive nitrogen species and the subsequent reduction in oxidative and nitrosative damage.
Copyright © 2012. Published by Elsevier Ltd, PMID: 23165145

Vitamin D and Death by Sunshine

Exposure to sunlight is the major cause of skin cancer. Ultraviolet radiation (UV) from the sun causes damage to DNA by direct absorption and can cause skin cell death. UV also causes production of reactive oxygen species that may interact with DNA to indirectly cause oxidative DNA damage. UV increases accumulation of p53 in skin cells, which upregulates repair genes but promotes death of irreparably damaged cells. A benefit of sunlight is vitamin D, which is formed following exposure of 7-dehydrocholesterol in skin cells to UV. The relatively inert vitamin D is metabolized to various biologically active compounds, including 1,25-dihydroxyvitamin D3. Therapeutic use of vitamin D compounds has proven beneficial in several cancer types, but more recently these compounds have been shown to prevent UV-induced cell death and DNA damage in human skin cells. Here, we discuss the effects of vitamin D compounds in skin cells that have been exposed to UV. Specifically, we examine the various signaling pathways involved in the vitamin D-induced protection of skin cells from UV.
Image B = Far less damage if have lots of vitamin D 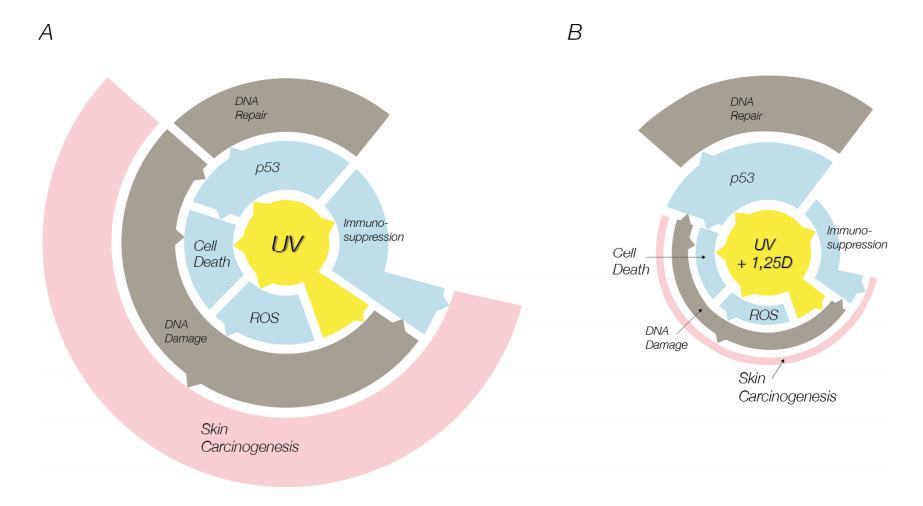 Solar ultraviolet (UV) radiation is the main source of vitamin D production and is also the most important environmental risk factor for cutaneous malignant melanoma (CMM) development. In the present study the relationships between daily or seasonal UV radiation doses and vitamin D status, dietary vitamin D intake and CMM incidence rates at different geographical latitudes were investigated. North-South gradients of 25-hydroxyvitamin D (25(OH)D) generation and CMM induction were calculated, based on known action spectra, and compared with measured vitamin D levels and incidence rates of CMM. The relative roles of UVA and UVB in CMM induction are discussed. Latitudinal dependencies of serum 25(OH)D levels and CMM incidence rates can only partly be explained by ambient UV doses. The UV sensitivity is different among populations with different skin color. This is well known for CMM, but seems also to be true for vitamin D status. The fact that UV-induced vitamin D may reduce the risk of CMM complicates the discussion. To some extent high dietary vitamin D intake seems to compensate low UV doses.
PDF is attached at the bottom of this page

Vitamin D protects DNA against UV skin damage – 5 studies 2012-2013         Printer Friendly PDF this page! Follow this page for updates
This page is in the following categories (# of items in each category)