with Incident Cardiovascular Disease and Mortality:

Objective: Our objective was to investigate the association of 25OHD, dietary vitamin D, PTH, and adjusted calcium with CVD and mortality in a Scottish cohort.

Design and Setting: The MIDSPAN Family Study is a prospective study of 1040 men and 1298 women from the West of Scotland recruited in 1996 and followed up for a median 14.4 yr.

Participants: Locally resident adult offspring of a general population cohort were recruited from 1972–1976.

There was no evidence that dietary vitamin D intake, PTH, or adjusted calcium were associated with CVD events or with mortality.

Vitamin D deficiency was not associated with CVD (fully adjusted hazard ratio = 1.00; 95% confidence interval = 0.77–1.31).
Results were similar after excluding patients who reported an activity-limiting longstanding illness at baseline (18.8%) and those taking any vitamin supplements (21.7%).

However, there was some evidence vitamin D deficiency was associated with all-cause mortality (fully adjusted hazard ratio = 2.02; 95% confidence interval = 1.17–3.51).

Conclusion: Vitamin D deficiency was not associated with risk of CVD in this cohort with very low 25OHD.
Future trials of vitamin D supplementation in middle-aged cohorts should be powered to detect differences in mortality outcomes as well as CVD. 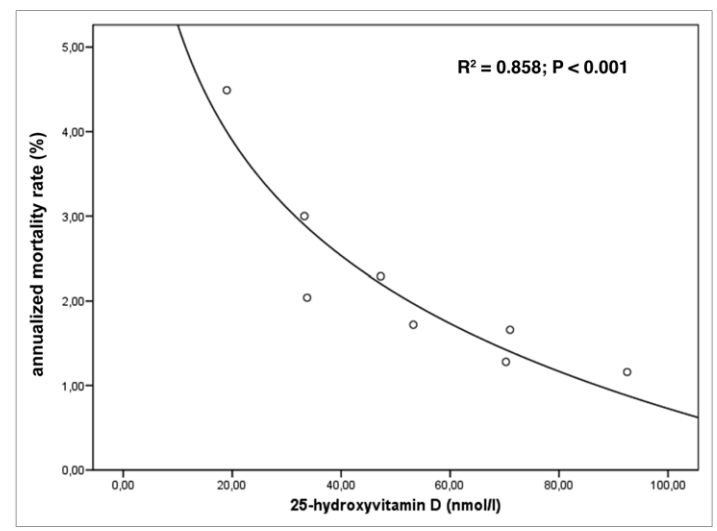 Low levels of vitamin D associated with all cause mortality – Oct 2012         Printer Friendly PDF this page! Follow this page for updates
This page is in the following categories (# of items in each category)