In our prior 2008 study [1] examining young women who were found to have severe vitamin D deficiencies by their general practitioners (GPs), we identified known risk factors for vitamin D deficiency, such as wearing clothes that leave little or no skin exposed, having a high body mass index (BMI), having a dark skin phototype, practicing indoor sports exclusively or no sports at all, and social insecurity. Several studies reported major improvements in highly deficient patients experiencing pain or poor health outcomes before treatment, when their deficiency was corrected [2-4].

We followed a group of women who had been recruited for the VESTAL study with the aim of bringing their vitamin D levels to >75 nmol/L, and maintaining improved levels for 1 year. We also analysed how serum levels of vitamin D are related to pain and the quality of life.

This study was a pragmatic observation study that consisted of following a cohort of deficient women originating from the VESTAL study for a period of 1 year. For this study, women were followed by their GP as part of the usual visits. This study fulfils the criteria for a non-interventional study as defined by articles L.1121-1 and r1121-2 of the public health code.

The vitamin D deficient women in the study were between 19 and 49 years old. They agreed to be followed for a year.
The criteria for exclusion were: an on-going pregnancy; a psychiatric pathology that could seriously interfere with her ability to understand what she was consenting to; or any pathology that developed following enrolment in the study that could interfere with phos-phocalcic metabolism (e.g., liver deficiency, kidney deficiency, absorption deficiency, skin disease).
Women were followed as part of their routine visits to their GPs. The deficiency was treated with vitamin D supplementation, and a biological and clinical assessment was carried out every 3 months for 1 year. GPs agreed to communicate the data necessary to carry out this observational study. The patients were informed orally that data concerning the correction of their hy-povitaminosis would be disseminated anonymously, and that a visit every 3 months would be required to ensure that their serum levels of vitamin D were normal. A refusal of these conditions led to the rejection from the study.

2.2.1. Vitamin D and PTH
The BIOMIS® and DIASORIN® laboratories elected to continue the collaboration started for the VESTAL study. The treatments were free for the patients. 25(OH) vitamin D was measured by the chemiluminescence analyzer of DIASORIN, the LIAISON®25OH Vitamin D analyser which have sensitivity at 0.970 and specificity at 0.987. Vitamin D2 + D3 were to be taken for 1 month following the last oral intake of vitamin D. This supplementation regime was repeated every 3 months for 1 year. Normal values fell in the range of 75 - 200 nmol/L. The toxic threshold was set at 250 nmol/L. A single dose of PTH was administered upon inclusion into the VESTAL study. To limit costs, PTH was only measured at the end of the study for patients who had an abnormal PTH level at the start of the study. PTH levels in the range of 15 - 65 ng/L were considered normal.

2.2.2. Others Data
At the beginning and the end, patients filled out an SF12® Health Survey questionnaire on quality of life. This questionnaire measure the variation for physical components summary (PCS) and the mental components summary (MCS). [5]. Pain evolution and fatigue data were collected at each visit, using 0 - 10 scales (with 10 being maximum fatigue and maximum pain). Supplement doses taken by the patients were recorded. And, at the end of the study, the patients were asked to assess their health. All of these data were collected in an anonymous grid that was filled out by the GPs. Advice concerning D3 supplementation in relation to patient vitamin D levels, based on the literature [6] was provided to the GPs as follows:

Each GP was free to follow those recommendations or to prescribe the supplementation doses according to his or her own established practices. In any case, the patients were informed of the dosage they were prescribed.

2.2.3. Data Analysis
The data were analysed using software SAS Institute software (Cary, NC). The patients were described based on their main characteristics expressed as means, medians, and standard deviations for the quantitative variables, and as frequency and percent for qualitative variables. The data were rendered anonymous and the study followed the norm MR001 of the CNIL (Commision National Informatique et Liberte). This work was not financed beyond the free supplements provided by DI-ASORIN and BIOMNIS. The authors declare no conflicts of interest.

3.1. Subjects
Among 186 women initially included in the study, 113 participated up to the first control time point and 65 were tested three times during the year Among the 121 missing women at the end of the year, 15 had become pregnant, 6 moved residence, 15 never collected their first treatment, 7 had a serious illness independent of their hypovitaminosis, 4 refused to continue the study, 2 reached the age limit, 6 were lost due to their GP leaving the study together, 18 were considered lost as their GPs did not hear from them despite several reminders, and 48 participated to only one or two controls and they were declared non-observable. The cohort of 65 women who took at least 3 dosages and who filled the questionnaire of end of study were followed-up. The number of veiled and non-veiled women varied similarly throughout the study. The mean age of the group was 36.7 years old and 18% received benefits from Couverture Medicale Uni-verselle (CMU), a free medical coverage for very low income populations. 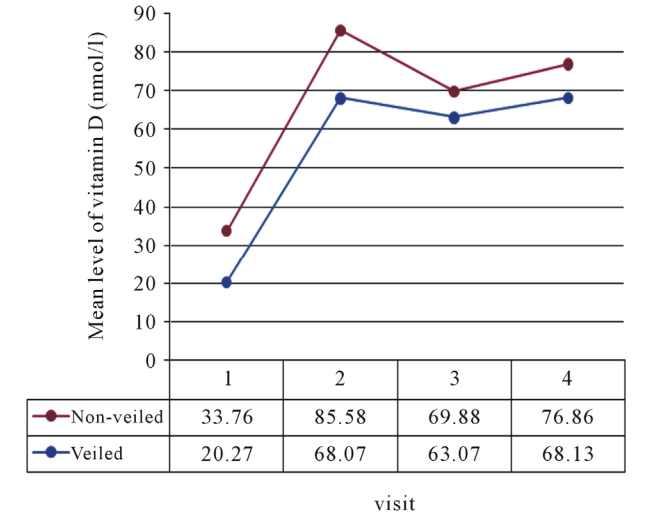 4.1. Limitation of the Study

A large portion of patients was lost during the course of the study. A comparison between women who left the study (N = 121) and those who completed it (N = 65) did not reveal differences in age, phototype, type of clothes worn, or enrolment in the CMU program. Mean vitamin D level, mean PTH level, and initial level of pain also did not differ between women who completed the study versus those who did not. Therefore, the dropping out of patients did not appear to alter the overall pattern of result. Many patients mentioned that they felt better and did not feel the necessity to consult their GP again.

The difficulty we encountered in terms of following patients in primary care is one that was also met by prior researchers, including Vieth and Levis in their respective studies. Indeed, Vieth lost half of his cohort of patients in a 5 months-long study [7] and Levis lost 53% of his patients between winter and summer [8].

4.2. Correction of the Deficiency and Preservation of the Level
The quantity of vitamin D prescribed to correct deficiencies and maintain serum vitamin D levels above 75 nmol/l was very high in our cohort, and vitamin D supplementation was even higher in veiled women than non-veiled women. As described in the literature, keeping vitamin D levels in the normal range appears to require not waiting to intervene until levels fall below 75 nmol/L For example, in a study performed in the United Arab Emirates, Saadi et al. reported a high prevalence of vitamin D deficiency (mean level of 19 nmol/L at inclusion) and also confirmed the importance of vitamin D supplementation in patients that are rarely exposed to the sun [9].

Holick et al. proposed that hypovitaminosis D be treated with 50,000 UI/week for 8 weeks to reach levels in the range of 75 - 125 nmol/l. Following a second measurement, it is then possible to give a dose of 50,000 UI every 2 weeks thereafter [6]. These studies show the diversity of possible therapeutic corrections and the high quantity of supplements required to treat serious deficiencies. The quantities consumed by our patients were similar to these proposed dosage regimens. Implementation of ~100,000 UI per week doses, offers the advantage of producing effects that are more readily observable.

No vitamin D toxicity was found despite some cases of high serum levels. A bibliographic review by Vieth showed that hypercalcemia is always accompanied by serum vitamin D levels higher than 220 nmol/L [7-11].

Heaney et al. supplemented patients who presented with serum levels close to 70 nmol/L for 20 weeks at dosages of 5500 and 11,000 UI/day. None presented with hypercalcemia, however a patient had a serum vitamin D concentration of 220 nmol/L [12].
Indeed, in a literature review, Hathcock et al. assessed the upper limit of vitamin D intake that can be tolerated. The absence of toxicity in trials conducted on healthy men led them to propose an upper limit tolerance of 250 Hg/day (10000 UI/day) [13].
Moreover, Vieth has indicated that sun exposure can lead to levels of vitamin D higher than 200 nmol/L without triggering hypercalcemia [7].

According to Holick the rare cases of hypervitamino-sis that have been observed were the consequence of accidental massive ingestion of vitamin D; doses of ~50,000 UI/day appeared to be necessary to increase a patient's serum vitamin D level to 374 nmol/l. Doses of 10,000 nmol/L do not appear to be toxic [6].

Hathcock et al. have confirmed that toxicity is linked to accidental ingestion, an interaction between medicines (e.g., mixture with a thiazidic compound), or an unfavourable biological background (e.g., kidney insufficiency) [13].

4.4. Evolution of PTH
Our study confirmed that serum level of vitamin D is inversely associated with PTH level. Indeed, PTH levels diminish when vitamin D levels increase. This inverse relation is widely acknowledged in the literature [14].
In a study aimed at testing various supplementation protocols, Heaney et al. showed that it is important to treat a hypovitaminosis to reduce a secondary hyper-parathyroidism. They found that variation of PTH levels consistently correlated inversely with variation of vitamin D levels (p < 0.01) [15].

4.5. Improvement of Clinical Signs
We did not observe a significant improvement of clinical signs (asthenia and pain), however a trend was observed. Indeed, the analysis of the patients' answers to the SF12 questionnaire showed that patients who experienced stronger increases in vitamin D levels between V1 and V3 also had improvements in their physical summary score (PSS). A similar association was not found with the mental summary score (MSC), indicating that the physical improvement observed was not attributable to improvement of an underlying psychiatric disorder.

The symptom of tiredness in veiled patients generally decreased over the course of the study; however pain did not decrease. The persistence of pain might be due to that doses of vitamin D administered being too low to maintain constant levels throughout the year. Non-regularly supplemented high risk women saw their serum levels diminish. Over the course of a randomised study, Vieth et al. showed an effect of vitamin D3 intake on the well-being of patients, with a dose of 4000 UI/day being more efficient than a dose of 600 UI/day for improvement of well-being [4].
Guidelines currently appear to correct deficiency and maintain optimal vitamin level with high doses 6000 UI/D during 8 weeks to correct and 600 to 2000 UI/d to maintain according to risk factors [17].

The authors thank the doctors who agreed to participate in patient monitoring.