Seniors, like everyone else, need vitamin D and should avoid sunburns – 2011

Vitamin D, UV, and skin cancer in the elderly: to expose or not to expose?

There is mounting concern about vitamin D insufficiency, especially in the ageing population. Increases in indoor lifestyle, obesity, car travel, clothing habits, the use of photo-protective makeup, and campaigns driven by dermatologists, governments, and the cosmetic industry to avoid or protect against the sun as much as possible are contributing to this trend.

In a recent article in Gerontology, Barysch et al. [1] recommend that the ageing population avoid any 'intentional' UV radiation as well as 'minimize sun exposure' based on known dangers of developing skin cancer. They warn that 'studies with vitamin D supplements reported increased risks of prostate and esophagus cancer as well as atopy in childhood' and concluded that 'adequate levels of vitamin D are essential for the elderly', but do not suggest which level is optimal. I will argue that the ageing population should keep their serum 25-(OH)-vitamin D(3) (25-(OH)-D) levels in the 75-100 nmol/l range. An oral cholecalciferol intake of ?2,000 IU/day is recommended as a supplement throughout the year for those who cannot enjoy the sun in summer or only during 'vitamin D winter' for the others.

Interesting statements in the paper

(all of the following are on the VitaminDWiki, but do not have time to make all of the hyperlinks) 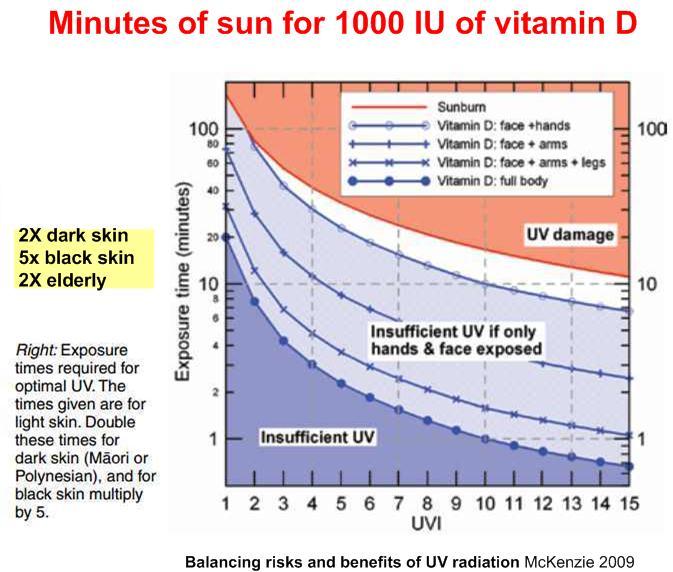 Seniors, like everyone else, need vitamin D and should avoid sunburns – 2011         Printer Friendly PDF this page! Follow this page for updates
This page is in the following categories (# of items in each category)

Expert Review by Dermatologists: get more vitamin D but avoid the sun – Dec 2012Nice Overview of Vitamin D in 64 slides - Glossmann 2013Pharmacology of vitamin D - April 2011Seniors, like everyone else, need vitamin D and should avoid sunburns – 2011The Greatest Public Health Mistake of the 20th Century (sunscreen block Vitam...The statin Crestor dramatically increases levels of vitamin D in the blood – ...Widespread regular sunscreen application deemed not useful in the US – April ...