Researchers noted that the Institute of Medicine recently suggested 20 ng/mL as the lower limit of the normal range for 25D, but this limit may be significantly higher among individuals with reduced kidney function.

The investigators examined the relationship between iPTH and 25D in patients with stages 3 and 4 CKD in a doubled-blind study of CTAP101 Capsules, a modified-release formulation of calcifediol. Seventy-eight patients aged 18-80 years were randomized to receive the capsules or matching placebo for six weeks. At baseline, subjects had a mean eGFR of 39.4 mL/min/1.73 m2, iPTH of 136 pg/mL, 25D level of 22.4 ng/mL, serum calcium level, 9.3 mg/dL, and serum phosphorus level of 3.7 mg/dL.

In the active drug group, a 25D level of 84 ng/mL was associated with the upper limit of normal for iPTH (72 pg/mL). Some patients had 25D increases exceeding 100 ng/mL, but investigators reported observing no significant change in calcium or phosphorus.

An increasing number of PubMed articles about "Optimum Vitamin D" 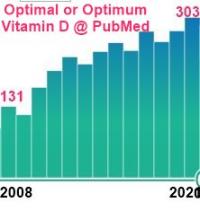 Need at least 80 ng of vitamin D if have chronic kidney disease – May 2012         Printer Friendly PDF this page! Follow this page for updates
This page is in the following categories (# of items in each category)