Vitamin D3 is liposoluble, so dietary fat could increase its oral absorption. Our aim was to compare serum 25-hydroxyvitamin D [25(OH)D] after the oral intake of cholecalciferol with a high- or low-fat meal.

A high-fat meal increased the absorption of vitamin D3, as measured by serum 25(OH)D.

Vitamin D is important for human health [1], and lower serum 25-hydroxyvitamin D [25(OH)D] has been associated with increased mortality [2]. Moreover, a high prevalence of vitamin D deficiency has been identified worldwide in recent years [3]. Dietary supplements are useful to prevent and treat this deficiency [4].

As vitamin D is liposoluble, its oral absorption could increase if ingested with a fat-rich meal. Although there are several studies about the effect of different ways to supply vitamin D in its serum levels [5-9] or in serum 25(OH)D levels [10-14], only a few of these studies describe the amount of fat ingested with vitamin D [7, 9, 11]. Therefore, the aim of this study was to compare serum 25(OH)D levels after the oral intake of cholecalciferol with a high- or low-fat meal in young adults.

This single-blind parallel randomized trial included 32 healthy resident physicians in Porto Alegre, latitude 30°, Brazil. Height and weight were measured to calculate body mass index (BMI: weight (kg)/height2 (m)). Two different groups were formed with 16 individuals, each according to sex and BMI, and randomly assigned to a high-(Group 1:G1) or low-fat meal (Group2:G2).The exclusion criteria were not drinking milk; BMI >30kg/m2 or <18.5kg/m2; known liver, kidney or endocrine disease; use of supplements of calcium and/or vitamin D; use of anticonvulsants, barbiturates, or glucocorticoids, and travel outside the Brazilian South region during the previous 120 days. Skin phototype was evaluated according to Fitzpatrick [15].

1 According to the Brazilian Table of Food Composition [16].
2 Percentage of total calories in the meal.

(Note by VitaminDWiki: High fat =high polyunsaturated. Would have had better response with a mono-saturated meal)

All participants came to the research unit on the same day at 7:00 AM, after overnight fasting. A blood sample was collected to measure 25(OH)D, parathyroid hormone (PTH), total calcium, albumin, magnesium, and creatinine, and a urine sample was collected to measure creatinine, calcium, and magnesium. Then, 50,000 IU of cholecalciferol in a capsule were administered by the oral route to each subject during a meal with high- or low-fat content(Table1). The subjects ingested the whole content of the meal, and then were advised to avoid sun exposure and changes in their usual eating pattern for the next two weeks. The researchers who collected the samples were blinded to the groups.

Overnight fasting blood samples were collected after 7 days for measurement of 25(OH)D and 14 days for measurement of 25(OH)D, PTH, and total calcium. Serum was kept at -70°C until the assay of 25(OH)D and PTH. All samples were analyzed in the same run: 25(OH)D by chemiluminescence (LIAISON, DiaSorin Inc., Stillwater/MN, USA, intra-assay coefficient of variation = 5.5%) and PTH by electrochemiluminescence (Roche Diagnostics, Indianapolis/IN, USA, intra-assay coefficient of variation = 2.8%).
The number of subjects, calculated to detect a 30% difference in mean serum 25(OH)D levels between groups, with a standard deviation of 7.7 ng/mL [17], power of 80%, and P<0.05, was 15 per group. One additional subject was included in each group to allow for losses.

Repeated measures ANOVA was used to compare mean serum 25(OH)D levels. Correlations were analyzed by the Pearson correlation coefficient. All data were analyzed with SPSSv.16.0, and differences were considered significant when P< 0.05. Cholecalciferol in powder (Taizhou Hisound Chemical Co. Ltd, Taizhou, Zhejiang, China) was provided by DEG Ativando Principios Company, Sao Paulo, SP, Brazil, which evaluated its content through HPLC (99.9%). The content of vitamin D3 in the capsules ranged from 48,170 – 52,777 IU. All of the vitamin D capsules contained lactose (82 mg) and crystalline micro cellulose (18mg). One International Unit (1 IU) of vitamin D is equal to 0.025 micrograms.

(Note by VitaminDWiki: most vitamin D comes in oil, not as a powder)

The study was approved by the Ethics Committee of HCPA, and participants were included after written informed consent.

Forty resident physicians were invited to participate, and all agreed. Seven were excluded because they had traveled to regions with high UVB incidence in the last 120 days, and one was excluded for having BMI >30kg/m2. Two participants, one from each group, did not enter the protocol, for missing the first appointment: one forgot and the other was acutely ill. All others were included in the analyses (Figure 1). The study was conducted in October 2009. 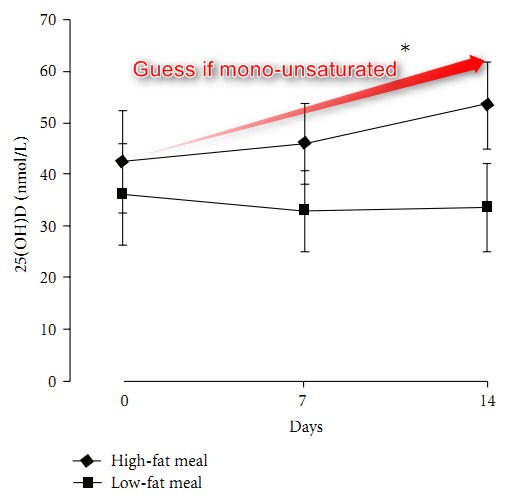 The improved bioavailability of cholecalciferol when administered with fat-rich food could be due to a higher release of bile, allowing an increased incorporation of fat in the bile salt micelle, and its absorption [19]. Few studies have evaluated the effect of dietary fat in the absorption of vitamin D. In a clinical trial that compared the effect of 25,000 IU of vitamin D2 intake with whole milk (8.4 g of fat/serving), skimmed milk (2.4 g of fat/serving), or toast with 0.1 mL of corn oil, there was no difference in mean serum vitamin D2 levels, which suggested that its absorption is not dependent on fat [9]. Nevertheless, the content of fat ingested was small in all groups, so serum vitamin D levels could have been higher if the vitamin had been ingested with more fat. In another study, normal individuals consumed low-fat cheese (~3 g of fat/serving) or high-fat cheese g of fat/serving), fortified with 28,000 IU of vitamin D, or the same amount of vitamin D dissolved in ethanol, with or without food, per week, for 8 weeks.

Mean serum 25(OH)D were similar in all groups treated with vitamin D and higher than placebo [14]. However, in these studies, the difference in the amount of fat provided by the meals for different groups was smaller than the one in the present study, and the total amount of fat offered in the meals was also smaller. Moreover, dissolving vitamin D in ethanol could have made its absorption easier.

In another study, higher mean serum vitamin D2 levels, in young and older adults, were observed when the vitamin was ingested with cheese (~20 g of fat/serving) when compared to water, suggesting that food facilitates its absorption, and is not affected by age [7]. In this study, the fat content of cheese was similar to the one provided in our study. A recent uncontrolled study found higher mean serum 25(OH)D levels when vitamin D supplements were ingested during the largest meal of the day; however, the content of these meals was not described [20].

Our study has limitations. The absorption of vitamin D was evaluated with only two meals with highly different fat content; however, these are not unusual dietary patterns in everyday life. Moreover, as the two meals were different also in other components, to offer a similar amount of calories, it cannot be excluded that vitamin D3 absorption was decreased in the low-fat meal group, due to its higher fiber content. Also, it cannot be excluded that different amounts of vitamin D were ingested by the subjects, as the amount of vitamin D in food was not evaluated. Nevertheless, it is very improbable that dietary vitamin D influenced the results, because natural food contains only small amounts of vitamin D. In addition, the participants were advised to keep their usual dietary patterns until completing the study. Another limitation was the measurement of serum 25(OH)D levels as a surrogate for serum vitamin D levels. Nonetheless, this metabolite increases rapidly after vitamin D supplementation, and it is measured to evaluate vitamin D status and the effect of vitamin D supplementation [17, 23].

As vitamin D absorption could explain in part the variability in serum 25(OH)D levels after the oral supplementation of this vitamin, other studies should be designed to clarify the role of food and dietary fat in vitamin D absorption, allowing us to determine the most effective way to improve vitamin D nutrition.

In conclusion, the results of this small randomized controlled trial show that vitamin D supplementation is more effective when given with fat-containing food.
These findings can have important implications to define the adequate dietary intake of vitamin D.

The authors declare no conflict of interests.

The authors are grateful to the Division of Nutrition and Dietetics/Hospital de Clinicas de Porto Alegre for preparing and serving the meals used in the study and to Rosana Scalco for performing the measurements of 25(OH)D and PTH. they are also grateful to Fundo de Incentivo a Pesquisae Eventos (FIPE/HCPA), Coordenacao de Aperfeicoamento de Pessoal de Nivel Superior (CAPES), and Conselho Nacional de Desenvolvimento Cientifico e Tecnologico (CNPq) for providing fundings.

High poly-fat meal, raised vitamin D, low fat, lowered D – Dec 2011         Printer Friendly PDF this page! Follow this page for updates
This page is in the following categories (# of items in each category)

No long term differences in vitamin D levels with amount of fat in breakfast ...Vitamin D estimation nicely improved by neural networks – May 2015Vitamin D with or before a meal: small Swiss study, no conclusion – Feb 2013When to take Vitamin D