Alterations in Vitamin D signalling and metabolic pathways in breast cancer progression: a study of VDR, CYP27B1 and CYP24A1 expression in benign and malignant breast lesions

Background: Breast cancer is a heterogeneous disease associated with different patient prognosis and responses to therapy. Vitamin D has been emerging as a potential treatment for cancer, as it has been demonstrated that it modulates proliferation, apoptosis, invasion and metastasis, among others. It acts mostly through the Vitamin D receptor (VDR) and the synthesis and degradation of this hormone are regulated by the enzymes CYP27B1 and CYP24A1, respectively. We aimed to study the expression of these three proteins by immunohistochemistry in a series of breast lesions.

Methods: We have used a cohort comprising normal breast, benign mammary lesions, carcinomas in situ and invasive carcinomas and assessed the expression of the VDR, CYP27B1 and CYP24A1 by immunohistochemistry.

Conclusions: From this study, we conclude that there is a deregulation of the Vitamin D signalling and metabolic pathways in breast cancer, favouring tumour progression. Thus, during mammary malignant transformation, tumour cells lose their ability to synthesize the active form of Vitamin D and respond to VDR-mediated Vitamin D effects, while increasing their ability to degrade this hormone.

Figure 2 from PDF attached at the bottom of this page 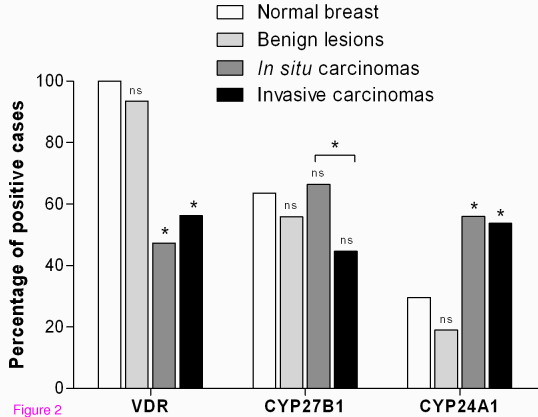 Breast cancer and Vitamin D receptors, CP27B1, and CYP24A1 – Sept 2010         Printer Friendly PDF this page! Follow this page for updates
This page is in the following categories (# of items in each category)