Methods
We examined the association between race and albuminuria (spot urinary albumin/creatinine ratio (ACR) ?30) among non-Hispanic black and white nonpregnant adults who were free of renal impairment in the National Health and Nutrition Examination Survey (NHANES) from 2001–2006. We conducted analyses without and with serum 25(OH)D. We adjusted for age, sex, education level, smoking, body mass index (BMI), diabetes, diagnosis of hypertension, and use of antihypertensive medication.
Results
Albuminuria was present in 10.0% of non-Hispanic blacks and 6.6% in non-Hispanic whites. Being black (odds ratio (OR) 1.46; 95% confidence interval (CI) 1.23–1.73) was independently associated with albuminuria. There was a graded, inverse association between 25(OH)D level and albuminuria. Notably, the association between race and albuminuria was no longer significant (OR 1.19; 95% CI 0.97–1.47) after accounting for participants' serum 25(OH)D. Similar results were observed when participants with macroalbuminuria (ACR ?300 mg/g) or elevated parathyroid hormone (>74 pg/ml) were excluded or when a continuous measure of 25(OH)D was substituted for the categorical measure. There were no interactions between race and vitamin D status though racial disparity in albuminuria was observed among participants with the highest 25(OH)D levels.

Participants. We examined data from the National Health and Nutrition Examination Survey (NHANES) conducted from 2001–2006. Because of our focus on racial disparity in albuminuria, we confined our analysis to participants who self-reported their ethnicity and race as non-Hispanic white or black.

Our sample included 7,651 adult participants (20 years and older) who participated in the interview and examination and for whom blood pressure (BP), vitamin D status, urinary albumin, and creatinine values were available. We excluded participants with chronic kidney disease (defined as estimated glomerular filtration rate <60) and females who were pregnant (positive urine pregnancy test or self-reported pregnancy). In secondary analyses, we excluded participants with macroalbuminuria and also those with elevated parathyroid hormone (PTH) (>74 pg/ml).19

Vitamin D status. Serum 25(OH)D was measured using a radioimmunoassay kit (DiaSorin, Stillwater, MN). The coefficient of variation for the years 2001–2006 ranged from 10–13% and the sensitivity for the 25(OH)D assay was 1.5 ng/ml).24 The serum 25(OH)D was adjusted for assay drift using methods recommended by the National Center for Health Statistics.25 Although 1,25-dihydroxyvitamin D is the biologically active form of vitamin D, serum 25(OH)D is regarded as the best indicator of vitamin D status in individuals without kidney disease.26 We grouped 25(OH)D into the following categories: <25, 25–49, 50–74, 75–99, and ?100 nmol/l.

Albuminuria. The untimed urinary albumin/creatinine ratio (ACR) was classified as normal if ACR <30 mg/g, microalbuminuria if ACR is between 30–299 mg/g, and macroalbuminuria if ACR ?300 mg/g.27 In addition to predicting progression of renal disease, albuminuria (both micro and macro) predicts cardiovascular disease.28 The definition of ACR was based on the criteria of the National Kidney Foundation.29 The rationale for using ACR of 30 mg/g and above is based on evidence that microalbuminuria is a predictor of cardiovascular disease and end organ damage.30

Race. Race and Hispanic ethnicity were assessed by self-report and were categorized as white (non-Hispanic) or black (non-Hispanic). Hispanics, Asians, Native Americans, and participants who self-identified with more than one race/ethnic group were not included in this study.

Control variables. We adjusted for potential confounding by including variables associated with albuminuria and vitamin D. These include age, sex, smoking, body mass index (BMI), BP, and diabetes.31,32,33,34,35,36 This represents a conservative approach since some of these variables may be affected by serum 25(OH)D levels.

Age at screening was grouped into categories of 20–34, 35–44, 45–54, 55–64, and those 65 years and older. Smoking status was defined as never smoked, current smoker, and former smoker. BMI was determined based on participants assessed weight (kg) and height (m) and categorized (<25.0; 25.0–29.9; ?30 kg/m2). Diabetes mellitus was defined by self-report of physician diagnosis or current use of medications for diabetes mellitus.

Statistical analyses. Analyses were conducted with SUDAAN (version 10.01) and Stata (version 10.1, College Station, TX), adjusting for the complex survey design of NHANES to yield appropriate standard errors and population parameter estimates. We examined the independent association of race with albuminuria (present or not) using logistic regression models. We compared the black-white differences in log odds of albuminuria before and after adjustment for 25(OH)D. We assessed interactions between 25(OH)D and race and between 25(OH) D and BMI. We also conducted analyses stratified by serum 25(OH)D levels to examine possible differences in effects by race. Finally, we conducted several secondary analyses. For this purpose, we repeated our analyses using microalbuminuria as a dependent variable, and excluding those with macroalbuminuria. We also repeated the analyses excluding those with elevated PTH and also using 25(OH)D as a continuous variable.

The model was checked for multicollinearity and no problem existed (all variance inflation factors <2). Since all of our independent variables are categorical, logit plots for linearity assessment were not needed. Independence is assumed due to the strict sampling methodology used by the NHANES group. Inspection of residuals did not reveal any influential outliers. In addition, a Hosmer–Lemeshow Goodness-of-fit ?2 statistic of 4.06, P = 0.8516 indicates that our model fits the data well.
Results
Our final sample included 7,651 non-Hispanic blacks and non-Hispanic whites, ages 20 years and older. Rates of missing data ranged from 0.01% for diabetes to 0.65% for estimated glomerular filtration rate. Albuminuria was missing for 3.5% of participants. Age, BP, and smoking were independently associated with missing albuminuria data. Twenty five percent of blacks had 25(OH)D levels below 25 nmol/l compared to only 2% of whites.

The overall prevalence of albuminuria in the total sample was 7.0%. Its prevalence was 10.0% among blacks and 6.6% among whites. Table 1 compares the characteristics of participants with and without albuminuria. As expected, those with hypertension, older than 55, less education, obese, diabetes, and those with lower serum 25(OH)D levels had higher prevalence of albuminuria. Figure 1 compares 25(OH)D levels by race. Blacks clustered in the lowest levels of 25(OH)D. 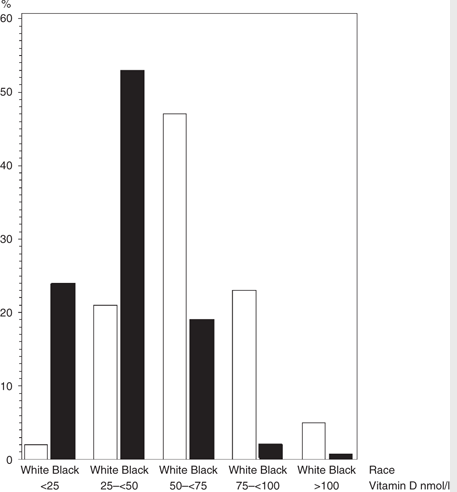 Percentage of participants by race by serum 25(OH)D level.
(Note:% in each nmol range - no ng/ml range)

Table 1 - Characteristics of participants by presence of albuminuria.

When vitamin D categories were added to the model, it showed a graded, inverse relationship with albuminuria. The lowest level was associated with a 2.4 higher odds for albuminuria compared to levels >100 nmol/l. Notably, the association between race and albuminuria was no longer statistically significant after accounting for serum 25(OH)D (OR 1.19; 95% CI 0.97–1.47). We observed similar effects when we used a continuous measure of 25(OH)D. Each nmol/l unit increase in 25(OH)D is associated with a 1% decreased odds for albuminuria (P < 0.01).

When we excluded participants with macroalbuminuria, we observed a similar relationship between race and microalbuminuria (OR 1.37; 95% CI 0.97–1.47) and a similar attenuation with adjustment for 25(OH)D status (OR 1.11; (95% CI 0.90–1.37). Similar results were also observed for the subsample (N = 2,375) where those with elevated PTH were excluded. Vitamin D status continued to show a graded inverse relationship with albuminuria. Similarly, the adjusted OR for race declined from 1.56 to 1.41. However, CIs were wider and overlapped 1.0 for these analyses based on a smaller subsample (N = 2,355).

Discussion
Reasons for disparity in albuminuria between blacks and whites are not fully known. Given emerging data linking low serum vitamin D status to albuminuria,9,10 and development of kidney disease,11,12 we examined the hypothesis that vitamin D explains the association between race and albuminuria in a national sample of black and white adults. The findings reported in this study confirm our hypothesis that vitamin D contributes to the noted racial disparity in albuminuria. Consistent with a previous report,4 we observed significantly higher prevalence of albuminuria among non-Hispanic blacks compared with non-Hispanic whites. We confirmed previous risk factors for albuminuria including older age, diabetes, BP, and smoking.31,32 Unexpectedly, the association of BMI and albuminuria was not statistically significant. This could represent adjustment for factors in the causal path between BMI and albuminuria (e.g., diabetes and BP) and/or inadequate statistical power.

As reported in a previous study,9 we also observed a graded, inverse response between 25(OH)D levels and albuminuria. The lowest levels were associated with the highest prevalence of albuminuria. Our findings did not change when participants with macroalbuminuria or elevated PTH were excluded from the analyses.

Notably, when we adjusted for serum 25(OH)D, the relationship between race and albuminuria was no longer statistically significant. This is consistent with the hypothesis that 25(OH)D may partly mediate the association between race and albuminuria. This finding is broadly consistent with a growing body of evidence suggesting that suboptimal vitamin D status is associated with vascular-related conditions that are more prevalent among blacks. These include hypertension,37 diabetic nephropathy,10 peripheral vascular disease,38 kidney disease progressing to renal failure,11 and cardiovascular diseases39 and mortality.40

Anthropological data suggest an evolutionary link between race and vitamin D consistent with an interaction between health outcomes, skin color, and latitude offering further plausibility for this provocative hypothesis. Vitamin D levels in response to ultraviolet (UV) exposure from the sun may have played a pivotal role in the evolution of differences in skin pigment that emerged based on continental ancestry.49 At low latitudes where UV exposure is high, dark skin pigment from higher concentrations of melanin may protect the skin and circulating blood folate.50 As human populations moved north with less intense UV exposure, selection pressures from vitamin D deficiency resulted in lighter skin pigment. Reductions in UV exposure from northern residence and less exposure (more in door activity and greater use of sun protection) appear to be associated with rising prevalence of vitamin D deficiency.51 Consistent with the findings from our study sample, vitamin D levels are lowest among blacks.52

These findings are subject to several important caveats. First, because our findings are based on cross-sectional data, we cannot determine the temporal relationship between 25(OH)D levels and albuminuria. A previous study showed that low vitamin D levels at baseline predicts progression of kidney disease up to 16 years later.11 Such results are conceivable given the relative stability of serum 25(OH)D levels over time.53,54 Second, we cannot exclude the potential for confounding; it is possible that vitamin D is simply a marker for other factors associated with albuminuria. However, findings from a small randomized controlled trial suggest the possibility of a causal relationship, such that supplementation with the vitamin D analog, paricalcitol, reduced albuminuria among persons with chronic kidney disease.44 Third, the use of a single untimed ACR sample may underestimate albumin excretion among blacks (due to higher creatinine excretion).55,56 Thus, use of ACR to assess kidney disease provides a conservative estimate of this racial disparity. Last, although we did not observe a statistically significant interaction between race and 25(OH)D, we observed a statistically significant effect of race and albuminuria only at 25(OH)D levels equal to or above 75 nmol/l. Whether this represents a chance finding or a differential effect by race, it has implications for the extent to which vitamin D status might contribute to this disparity. There is some evidence for vitamin D economy among blacks for bone turnover and formation, meaning that blacks maintain bone health at lower levels of vitamin D.57 Further study is needed to determine whether this holds for other outcomes. In particular, interventional trials are needed to both confirm a causal role of vitamin D status in albuminuria for both whites and blacks and determine whether there is a threshold effect.

Disclosure
The authors declared no conflict of interest.

Blacks have low vitamin D and have 50 percent more kidney failure – Sept 2011         Printer Friendly PDF this page! Follow this page for updates
This page is in the following categories (# of items in each category)