When it comes to the way breast cancer spreads throughout the body of African American women are in comparison to white women, there significant differences.

These disparities have led the National Cancer Institute [NCI] to award a $19.3 million research grant to Roswell Park Cancer Institute [RPCI], the University of North Carolina Lineberger Comprehensive Cancer Center [UNC] and Slone Epidemiology Center at Boston University [BU] to study why breast cancer in African American women is distributed out of the ordinary.

The synopsis of the study, which is the largest to date, is to find out why African American women are more prone to getting an aggressive form of breast cancer than young white women.

“Breast cancer in African American women occurs at an earlier age than in Caucasian women and is more likely to have aggressive features associated with poorer prognosis, regardless of age at diagnosis,” said Dr. Christine B. Ambrosone, professor of oncology and chair of the department of Cancer Prevention and Control at RPCI. “The mechanisms underlying these differences are as yet unknown.”

She says hard-hitting sub-types of tumors such as Basil-like (TN) are responsible for growth of cancer that spreads throughout the body and can’t be treated with chemotherapy.

Additionally, Ambrosone points out that many breast tumors are driven by estrogen and the majority of them express the Estrogen Receptor (ER) as well as other receptors for hormones such as the Progesterone Receptor (PR) and the Human Epidermal Growth Factor (HER2).

African American women under the age of 45 have a five-year survival rate from breast cancer of 76 percent, compared with 88 percent for young white women (for the years 2001-2007, the most recent years for which data are available).

Dr. Robert C. Millikan a scientist at UNC has worked diligently over the years to explore the Black/white differences in breast cancer sub-types.

His efforts along with Ambrosone and Dr. Judy R. Palmer a scientist and professor of epidemiology at the Slone Epidemiology Center at BU will provide a collaborative effort to make available critical answers to improving treatment and reducing the risk of breast cancer in Black women.

He says that Black and white women have the same category of subtypes of cancer it’s just that it circulates differently in Black women.

“Black and white women both have five subtypes of breast cancer,” said Millikan. “It is the distribution of the subtypes that varies.”

Millikan says that during their research they discovered differences that have also been associated with body size and breastfeeding.

Furthermore, there’s a correlation between insufficient levels of Vitamin D and breast cancer in Black women.

During these clinical trials tissue will be gathered from patient’s tumors so subtype tumors can be defined.

Previous efforts in battling breast cancer in Black women have been hampered, because there was no large enough population to investigate risk factors for subtypes in African American women.

“By combining our studies and expertise, we will finally be able to uncover the reasons for these disparities,” said Palmer who began the BWHS. “Our hope is that this research will identify factors that can be used to prevent this deadly disease.” 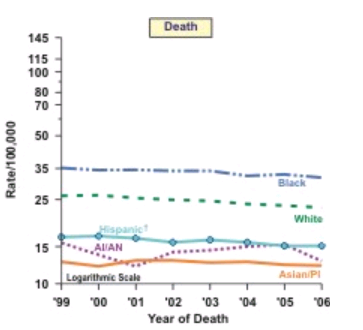 Breast cancer worse for black women – Sept 2011         Printer Friendly PDF this page! Follow this page for updates
This page is in the following categories (# of items in each category)