Extensive research has shown that Vitamin D deficiencies play a role in the development of dozens of diseases - everything from a variety of cancers such as breast, prostate and colon cancer to diabetes, heart disease, arthritis, osteoporosis, psoriasis and mental illness.

While many people are beginning to experience the tremendous health benefits that Vitamin D has to offer in the prevention of disease, according to the non-profit Vitamin D Council, along with many other prominent doctors and research experts, people may not be getting the optimal level of benefits that are possible from Vitamin D without also supplementing their diets with magnesium.

Dr. John Cannell, Executive Director of the non-profit Vitamin D Council discusses the nutrients required for proper vitamin D metabolism, citing the importance of magnesium along with several studies that illustrate this point.

Additional studies reveal: “Magnesium has been found to influence the body’s utilization of vitamin D in the following ways: Magnesium activates cellular enzymatic activity. In fact, all the enzymes that metabolize vitamin D require it.” 2,3

“Low magnesium has been shown to alter, by way of decreasing, production of vitamin D’s active form ...” 4

“Magnesium is needed to exert positive influence over the human genome (a genome is the entirety of an organism's hereditary information encoded into DNA/RNA) and may be involved in the genetic actions of vitamin D. Magnesium possibly has a role in vitamin D’s effect on the immune system.” 5

Magnesium supports calcium absorption by activating vitamin D into a form that enables it to interact with calcium. While most osteoporosis treatment and prevention research has zeroed-in on increased calcium and vitamin D intake, a 2005 study published in the "Journal of the American Geriatrics Society" discovered that out of 2,038 women and men between the ages of 70 to 79, the Caucasian individuals who consumed the most magnesium had the greatest bone density and the lowest risk of developing osteoporosis. The researchers conclude that increasing magnesium intake may be an even more effective preventative measure against bone-thinning than vitamin D treatment in Caucasians.

In another study entitled “Vitamin D resistance in magnesium deficiency”, researchers conclude, “All these data would suggest that adequate amounts of magnesium are required for the optimal expression of pharmacological vitamin D action and parathormone on bone mineral release.” 8

According to Marc Sorenson, author of Solar Power For Optimal Health, “Osteoporosis is closely correlated to heart disease. Vitamin D deficiency could certainly be a factor in both, because there is a strong inverse relationship between vitamin D levels and artery calcification; the more D in the blood, the less the calcification. Artery cells have vitamin D receptors (VDR), which when stimulated by vitamin D, inhibit the incursion of calcium.”

These research results correlate with the findings of Carolyn Dean, MD, ND, author of The Magnesium Miracle, and Medical Director of the non-profit Nutritional Magnesium Association. www.nutritionalmagnesium.org

According to Dr. Dean, “Adequate levels of magnesium are essential for the absorption and metabolism of calcium and Vitamin D. Magnesium converts vitamin D into its active form so that it can help calcium absorption.”

“Magnesium stimulates a particular hormone, calcitonin, which helps to preserve bone structure and draws calcium out of the blood and soft tissues back into the bones, preventing some forms of arthritis and kidney stones.”

Dr. Scott Whitaker, in his book MediSin, tells us how modern day farming methods including the use of artificial fertilizers, pesticides, and herbicides have depleted our soils and foods of magnesium and other vital nutrients. "The end result of our domestic food production has been 'quantity' rather than 'quality'. The human body can thrive on fruits and vegetables that are grown on vital rich soil but not on soil that is artificially pumped up with chemicals." Thus today our soils and foods are demineralized and do not allow us to get enough minerals from diet alone leaving us the alternative of supplementation.

CLICK HERE for 32 minute audio by Dr. Dean which is preceded by a short advertisement

Overview include the following as of Sept 2011

Reasons for Magnesium Deficiency include

Most people are Magnesium Deficient 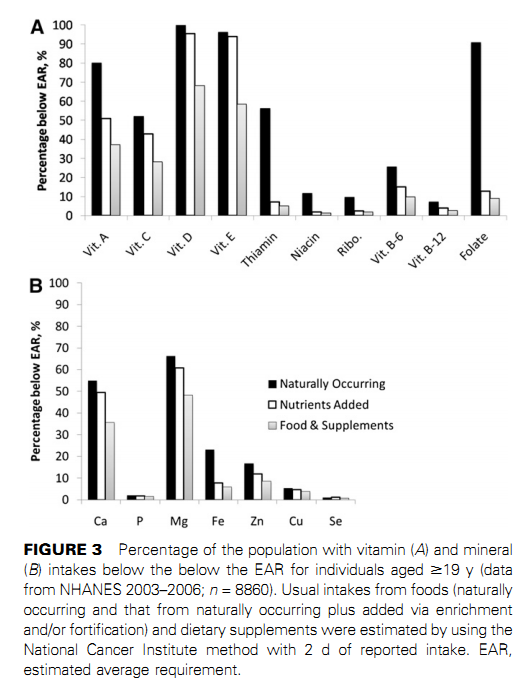 from Most people not getting enough Vitamin D, Magnesium, and Vitamin E – Aug 2011

Magnesium Deficiency Reduces Vitamin D Effectiveness- Sept 2011         Printer Friendly PDF this page! Follow this page for updates
This page is in the following categories (# of items in each category)